The insurgency has had great success in the last two months. It has taken over much of Ninewa, Salahaddin, Kirkuk, and Anbar provinces, and has a strong foothold in Diyala and Babil as well. This success has maintained a lose alliance between the major militant groups, which includes the Islamic State (IS), the Baathist Naqshibandi and its Military Councils, Ansar al-Islam, the Mujahadeen Army, and the Islamic Army of Iraq. Behind the scenes IS has been attempting to dominate the other groups by demanding that they pledge allegiance to it, and pushing out its rivals from its bases. This has led to open warfare with the Islamic State in the Hamrin and Sadiya areas of Diyala. 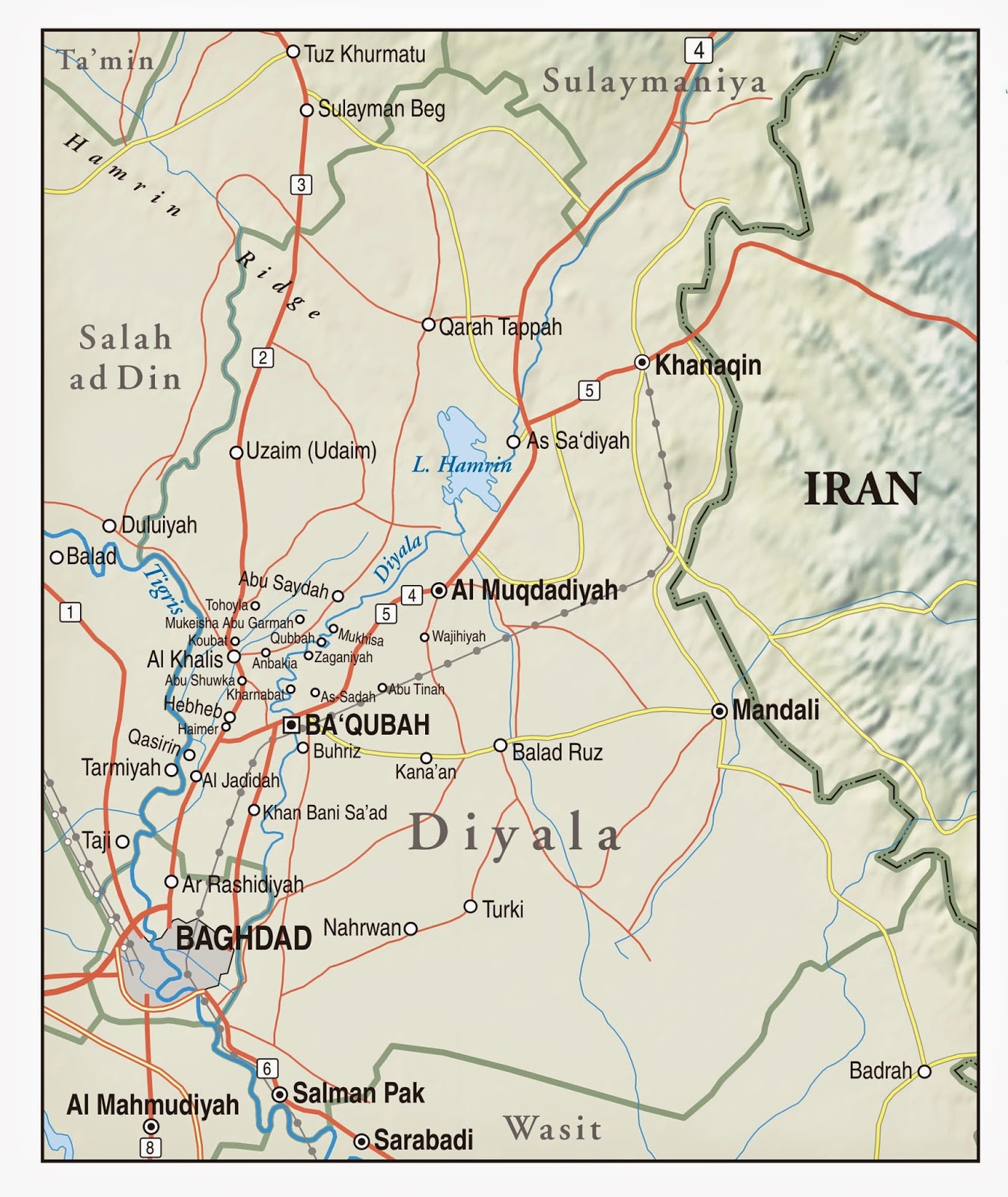 The Islamic State and its predecessor Al Qaeda in Iraq have a long history of attempting to take over other militant factions. That was one major reason why other groups turned against it in Iraq during the civil war, and is on going in Syria. Now IS is repeating that trend today in Iraq in the midst of this summer offensive. Two increasingly contested areas are Sadiya and the Hamrin Mountains in the eastern section of Diyala province. This is a longtime insurgent hotbed that includes cells from the Naqshibandi, Ansar al-Islam, and the Islamic Army of Iraq (IAI). There IS has demanded that other insurgent groups pledge allegiance to it or suffer the consequences. This started off in small isolated incidents, but then on July 25 IS gave all the other militants 48 hours to give their loyalty or be attacked. Ansar passed out leaflets rejecting that ultimatum. Before that the Naqshibandi said that it would not join the Islamic State’s caliphate. This has led to more and more bloodshed between the rival groups.

The first reports of armed confrontations between the IS and other militants emerged in the spring of 2014. One of the earliest stories emerged on April 7 when a Naqshibandi leader and his son were killed in the Hamrin area. Before that the Baathists had been complaining that the IS was kidnapping its members. Then on May 2 an intelligence source in Diyala told Alsumaria that the Naqshibandi had okayed the killing of IS members in the province after 6 of its commanders had been assassinated. At the same time Ansar al-Islam declared war on the IS in Diyala as well accusing the State of killing its members. By the beginning of June it was said that anywhere from 20 to 70 fighters had died as a result of this infighting. By June 1 an IS leader and two of his aides were ambushed and executed by the Naqshibandi in retaliation for some of its fighters being killed in Salahaddin. On June 21 there were media reports that the Islamic Army had joined the fray against the IS in Diyala with three of its men dying as a result. June 25 5 IS fighters were found slain by the Naqshibandi. This tit for tat fighting continued throughout July, but this time shifting over to the Sadiya area that neighbors the Hamrin Mountains. From July 1 to 14 the Iraqi press recorded 8 Naqshibandi, 15 Islamic Army and 16 Islamic Army members dying as a result. July 20 the Baathists allegedly set up assassination squads to go after IS cells after it booby trapped one of its safe houses and killed and wounded 7 of its men. The next day 11 Ansar men were executed for refusing to give their loyalty to the IS. By July 28 Naqshibandi and IS factions were beheading each other. In total around 200 insurgents have died in Diyala since April. This in fighting has also gone on in Salahaddin, Kirkuk, Ninewa, and Anbar provinces. As IS has expanded its influence and power across Iraq it has increasingly demanded all the other groups follow its lead. It is repeating the same history seen in Iraq from 2005-2008 and Syria in more recent times. Because IS sees itself as the vanguard in an Islamic revolution it feels that all other groups must follow it. The other groups have rejected those calls due to their ideological differences and desire for independence.

In Diyala an open war has emerged between the Islamic State and other insurgent groups with more and more deaths reported on all sides. This has happened in other areas of the country, but not at the same level. This is likely because there are still opportunities to expand and win victories against the government there. The Hamrin Mountain area however is a longtime insurgent held area where the IS is trying to push other factions out. In other places where the militants’ control solidifies like Mosul these differences will emerge more and more as well as the same pattern is repeated. The Islamic State has an unquenchable desire to expand and dominate, which will always put itself at odds with the other armed groups. If Baghdad were politically adept it would attempt to use these differences by playing one armed group against the others. Unfortunately it appears that the Iraqi government considers all insurgent factions as an existential threat and wants nothing to do with them. That will leave the militants to fight amongst themselves. As long as the IS remains the most well funded and armed faction it will win more of these battles than it losses thus given it more and more control over Iraqi territory.

Alsumaria, “”Army of the Mujahideen” refuses to pledge allegiance to al-Baghdadi,” 7/15/14
- “Intelligence source in Diyala: Naqshibandi allow the killing of leaders and members of Daash and describe them as apostates,” 5/2/14
- “The killing and wounding of seven leaders of the Naqshbandi by a roadside bomb northeast of Baquba,” 7/20/14

Independent Press Agency, “Clashes between the Naqshbandi and Daash in Saadia,” 7/18/14

Al Mada, “Daash concerned with its rivals..Sharia courts and the fate of those who refuse allegiance,” 7/27/14

New Sabah, “Council Diyala: sharp differences between armed groups,” 5/5/14
-“With Arab nationalities are trying to consolidate their image in the scene,” 7/20/14

Al Rafidayn, “Diyala announce the deaths of more than two dozen in armed infighting going on between Daash and Naqshbandi,” 6/3/14

Al Rayy, “”Ansar al-Sunna” renews his refusal to swear allegiance to “Daash” in terms of Saadia northeast of Baquba,” 7/26/14
- “Daash gives five armed organizations in Diyala 48 hours to pledge allegiance, or depart or retribution,” 7/25/14
- “Diyala source: Ansar al-Sunna declares war against Daash and is considered a tool to distort Islam,” 5/3/14
- “Diyala: terrorist difference deepen with finding the bodies of five Daash killed by the Naqshbandi,” 7/30/14
-“Five killed in clashes between gunmen and the Dash organization northeast of Baquba,” 7/26/14
- “The killing of 11 Daash militants in clashes with Ansar al-Sunna in Diyala,” 7/21/14
- “The killing of 19 militants from “Daash” and “Islamic Army” in clashes in Diyala,” 7/14/14
- “The killing of four terrorists of the Naqshbandi and Daash in clashes between them in Diyala,” 7/4/14
- “Naqshibandi make assassination squads for Daash after killing and wounding seven of its members in Diyala,” 7/20/14
- “A source in Diyala: “Daash” executed more than 10 members of the “Islamic Army” and “Naqshibandi,”” 7/14/14

thanks! this in fighting is only going to increase with time