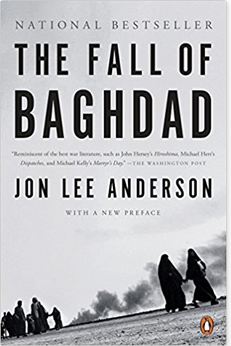 Jon Lee Anderson is a writer for the New Yorker magazine who was in Baghdad from 2002-2003 to witness the invasion, and then went back several times afterward. His time in Iraq was collected together in The Fall of Baghdad. The book is like a journal mostly consisting of recollections of the people he met in Iraq. There are ten chapters each with a rough theme. Chapter One is an insight into how Iraqis viewed the world before the overthrow of Saddam. In Baghdad for example, his handlers from the Information Ministry could not talk about all the presidential palaces and other government buildings in the capital even as they drove past them. Later he went to Basra where everyone was talking about people getting sick from uranium leftover from U.S. munitions used in the Gulf War. He saw no proof of that, but that was what the government and everyday people were talking about. At that time, Iraq was like an alternative universe with its own narratives divergent from the rest of the world. Chapter Two, Anderson went to Iran to talk with Iraqi exiles and Iranians about the coming war. Chapter Three described how foreign journalists had to work in Saddam’s Iraq with a driver, a handler, dealing with the Information Ministry, getting visas, paying bribes, etc. Chapter Four dealt mostly with the 1920 Revolt when Iraqis rose up against the British occupation, which was foreshadowing what the Americans would experience after 2003. Chapter Five was on Anderson and other reporters preparing for the invasion. Most in the media were told by their companies to leave. Anderson decided to stay. Chapter Six to Eight were on the bombing of Baghdad when the war started. Iraqi officials like the infamous Information Minister Mohammed al-Sahaf would tell the remaining media that the U.S. was losing the war, and would take them on tours to see war casualties to emphasize the civilian toll. In Chapter Nine the Americans reached Baghdad and looting started in the eastern section of the city. Chapter Ten was after the war was over and Anderson tried to get his Iraqi friends to face up to the Baath era, especially because he knew several people closely associated with Saddam. All would condemn the dictator, but none could really explain why they had worked with the regime. The Epilogue covers 2003-04 as Baghdad and the rest of Iraq fell into disarray. Inside the capital there were shortages, Iraqis were getting angrier and angrier at the U.S. presence, while American troops appeared completely out of their element dealing with civilians. Fallujah exploded and then the Coalition Provisional Authority targeted Moqtada al-Sadr leading to his uprising in 2004. To Anderson it felt like everything was falling apart, and the warnings of a new 1920 Revolt appeared to be coming true.

Fall of Baghdad shows the limitations of being a reporter during a war in a dictatorship. Before the invasion, Anderson’s movement was extremely limited due to government restrictions, and the Iraqis he met often censored themselves. When the war started, Anderson was mostly stuck in the hotels he stayed in. Afterward, the situation was little better. At first, he felt like he could go to all new parts of the city, but then it became unsafe as the looting spread, and then the U.S. forces came under attack and anyone associated with them including the press. Because of that and the style of Anderson’s writing the scope of the book is circumscribed. The best parts are when the Americans reached Baghdad and the chaos that spread through the city in its aftermath as Anderson provided a brief glimpse of what that period was like.
- March 26, 2018