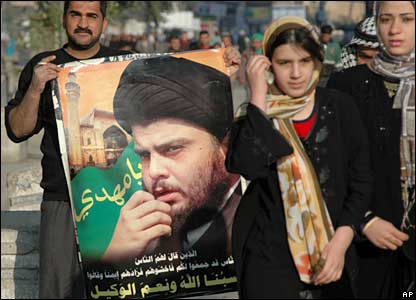 Could Sadr Have Lost His Support?
Figuring out the intentions of Shiite leader Moqtada al-Sadr can be as difficult as cracking the secrets of the Kremlin during the Soviet era sometimes. Russian experts in the West use to study who walked out with the Premier during public events to try to decipher who was in and who was out in the communist hierarchy. Analysis of Sadr is sometimes just as arcane. What is in the immediate future for his followers, especially after the government’s operations in Basra, Sadr City, and Maysan province is the newest topic of debate. It appears that the Mahdi Army is in tatters, and that Sadr’s lack of leadership may have put his entire movement in jeopardy.

Even before the government’s offensive, many were unhappy with the direction of the Sadr trend. Sadr had become reclusive, not being seen in public since May 2007. When the Surge was announced, he moved to Iran for religious training in the holy city of Qom. He was also afraid that he might be arrested. Sadr removed himself from the day-to-day running of the movement. Maintaining the organization was passed to a committee that was divided between older and younger followers. Many elements of his militia also began working for Iran in the Special Groups, turned towards crime and protection rackets that preyed on fellow Shiites, and running their own fiefs. A movement that was never well organized in the first place, seemed to be even more divided.

A major point of contention was the cease-fire Sadr ordered in August 2007, and then renewed in February 2008. Many of Sadr’s militiamen and younger aides wanted to return to the streets and confront the U.S. and the Iraqi security forces they accused of persecuting them. The older leaders and some of Sadr’s bloc in parliament wanted to maintain the cease-fire and focus upon politics. This divide was increased when Prime Minister Maliki launched his crackdown against the Mahdi Army in March 2008. The militants took to the streets across Baghdad and southern Iraq, ignoring the cease-fire. There were some reports that Sadr supported this faction and wanted to confront the government. On the other hand, there were others that said Sadr provided no leadership at all during the fighting, and seemed to be disinterested.

Another major problem was Sadr’s seemingly contradictory directives. Sadr’s wishes were delivered to his top aides, who then had them read aloud during prayers. Without his actual presence in Iraq, it was up to his aides and followers to interpret his intentions, which often could be taken any number of ways. For example, in early March 2008 he said that the Mahdi Army had the right to defend itself just after he renewed his cease-fire the month before. At the same time he said that his movement would act peacefully and focus upon politics. Militiamen could take this anyway they wanted, either attacking U.S. and Iraqi forces, and their arch rival the Supreme Islamic Iraq Council’s (SIIC) Badr Brigade claiming self-defense against raids, or continue standing down.

Sadr himself seemed conflicted before Baghdad moved against him. In 2007, he allegedly went to Grand Ayatollah Ali al-Sistani asking for advice about what he should do with his movement. Sistani told him that he could either face the Shiite masses or pull away. Afterwards Sadr left Iraq for religious training in Iran. This could have been to enhance his religious standing by becoming an ayatollah that would allow him to issue fatwas and challenge established leaders like Sistani. On the other hand, it could have been to get away from the inter-Shiite power struggles he was entangled in.

Sadr’s mixed signals continued in early March 2008 when he sent a letter to his followers about why he hadn’t been seen for so long. He replied that he was staying out of the public eye because he felt like he had failed to achieve his goals. The Mahdi Army had not kicked out the Americans, and failed to establish an Islamic state. He also felt betrayed by some of his followers who had left his movement. This didn’t seem like a message by a leader that wanted to continue on with these struggles. This came just after Sadr had renewed his cease-fire in February.

And A Government Crackdown…

After ordering the fighting to stop in Basra and Sadr City with government forces, Moqtada continued on with his contradictory announcements. In June 2008, he said that he was disbanding his militia. He ordered most of his followers to focus upon social and religious goals, while a brand new and elite unit would be formed to just fight the U.S. At the same time, he said that Sadrists would not run in the provincial elections. Instead they would support independents, technocrats, and friendly political parties. This was to get around a threatened ban on voting by political parties that had militias. Again, the interpretations were many. By saying that he still opposed the Americans, he could be signaling to his followers to continue on with their attacks. It also might be a sign of the weakened positions of the movement. Many of his commanders and other leaders had been killed, arrested, or were on the run. It was said that most of his militia did not fight the government forces, and were laying low to fight another day. On the other hand, many of his fighters could have been eliminated, and saying that he was going to form a small, elite unit, was a way to give the image of continued resistance, while not having the means to actually carry it out. The same things, both pro and con were said about his pronouncement about the upcoming elections.

In June, when Maliki sent forces to Maysan, Sadr tried to change his approach, but the results were the same. Sadr ordered his followers to cooperate with the security forces. They complained about arrests, but not the actual offensive. The government ended up arresting many Sadrist politicians and militiamen, found dozens of weapons caches, and collected others in an amnesty program.

Today, the Sadrists’ weakened position is opening up opportunities for others, while the movement continues to fracture. Iraqi intelligence believes that the Mahdi Army is nearly destroyed. Up to 2,000 fighters have been killed in the battles of Basra and Sadr City, while 1,300 fled to Iran. It’s often said in the Western press that he has 60,000 gunmen, but if that number was ever true it was during the height of the sectarian fighting of 2006-2007 when hundreds of hangers-on were joining. He more likely has a fraction of that now. Sadrists continue to be arrested across the country, and many of their arms caches have been discovered. Religious leaders in Najaf like Grand Ayatollah Sistani and Prime Minister Maliki are trying to pry away Sadr’s followers. The U.S. is also creating Sons of Iraq units in the southern section of Sadr City that is walled off to take away some of his fighters. Many supporters believe that Sadr gave in to the government, when they were holding their own in the fight. Cooperating with the security forces in Maysan was seen as further capitulation. The divide between those that want to fight, and those that feel like politics is the future of the movement continues as well.

Moqtada al-Sadr’s standing as one of Iraq’s main political and religious figures is being threatened by his own leadership style, divisions within his movement, and the government’s crackdowns. Sadr has never been clear about his intentions, which has divided, and sometimes infuriated his followers. His decision to go to Iran has undermined his position as well, because he is not in Iraq to lead and settle disputes. Prime Minister Maliki’s operations have either destroyed much of his militia, or put them on the run. What he wants to do next is still a matter of debate both within and without Iraq, showing that he continues to confuse many. If nothing else, Sadr has proven to be a survivor. He saw the destruction of much of his militia before in 2004, only to rebuild it into one of the most powerful forces during the sectarian war period. This time, things may be different. Sadr may have discredited himself in the eyes of many Shiites, costing him his base. Other forces are actively attempting to peel away his remaining followers. Every day Sadr remains in Iran, he continues to appear as an aloof and disconnected leader. He may survive, but there may not be much left when he does return.

Cordesman, Anthony, “Quietism and the U.S. position In Iraq,” Center for Strategic and International Studies, 6/19/08

Fadel, Leila and Youssef, Nancy, “Is ‘success’ of U.S. surge in Iraq about to unravel?” McClatchy Newspapers, 3/24/08

Email ThisBlogThis!Share to TwitterShare to FacebookShare to Pinterest
Labels: Sadr