Look Who The Los Angeles Times Dug Up – CURVEBALL

On June 18, 2008 the Los Angeles Times ran a story based upon interviews with the famous Iraqi defector Curveball. Curveball was almost single-handedly responsible for the story that Iraq had mobile labs capable of producing biological weapons. The story eventually got into Pres. Bush’s 2003 State of the Union address and Secretary of State Colin Powell’s U.N. speech. Despite the certitude of those pronouncements, Curveball’s story was actually highly disputed within the U.S. intelligence community. They just never told the higher ups. Afterwards Curveball’s entire story was proven to be false. The whole incident was a perfect example of the shoddy intelligence work that helped lead to the war.

Two Los Angeles Times reporters tracked down Curveball, real name Rafid Ahmed Alwan, in Germany. Alwan lived with his family and was struggling through a number of low paying service jobs. When asked about his story that Iraq had mobile WMD labs, he was unrepentant claiming that what he said about Iraq was true, and that he should be treated “like a king” for everything he did.

Alwan’s story begins in Iraq. He grew up in the capitol Baghdad where he attended University. When he came to the West he claimed that he finished top of his class, but he was actually last with a D average. He had a number of jobs until he ended up in a warehouse that inoculated seeds for farmers. This was the plant he later claimed was actually a secret WMD facility. He would later tell German intelligence that the warehouse was used to build mobile labs and his job was to check the equipment. He only worked at the seed house until 1995, but he told the Germans that in 1997 he helped build a mobile lab, and in 1998 he witnessed a biological weapons accident. In reality, at that time he was working for a film studio where he tried to steal money. When an arrest warrant was issued for him he fled the country and ended up in Germany in 1999.

It was his attempt to gain official entry into Germany that led to his stories about the mobile labs. In 2000 he asked for political asylum. Instead he was placed into a refugee camp. It was then that he started talking about Iraq’s WMD program. The Germans interviewed him 52 times. That information was passed onto England’s MI6 and America’s CIA. During the whole time Alwan was in Germany, they never checked out his story. Rather as time passed they grew to believe that Alwan was unstable and making up his claims, but still stood by him officially. It didn’t help that once he got asylum in 2001 he stopped cooperating.

Alwan’s story was embraced by U.S. intelligence. The Defense Intelligence Agency (DIA) for example, wrote over 100 reports based upon him. The DIA had a whole set of experts, analysts and satellites working to prove his story. At almost the same time questions began being raised about him. For example, in 2001 the CIA station chief in Berlin said the German’s couldn’t find Alwan, and that they had never verified his story. The head of the CIA’s European Division’s Directorate of Operations told CIA headquarters that the Germans believed that Alwan was crazy, while British intelligence told the CIA that they didn’t think his story was reliable. The CIA analyst in charge of the mobile labs story however, stood by Alwan through thick and thin.

Even with all the questions regarding his reliability, Alwan’s story was used more and more by the Americans. The October 2002 National Intelligence Estimate on Iraq said that Saddam had an active and larger biological weapons program than before the Gulf War, largely based upon the mobile labs claim. In December when the State Department and CIA met to draft Secretary of State Colin Powell’s speech to the United Nations, all of the doubts and questions about Alwan were brought up. Unfortunately none of these concerns were passed upon to Powell and the mobile labs story became a major part of his presentation. President Bush also used Alwan’s story in his 2003 State of the Union address. 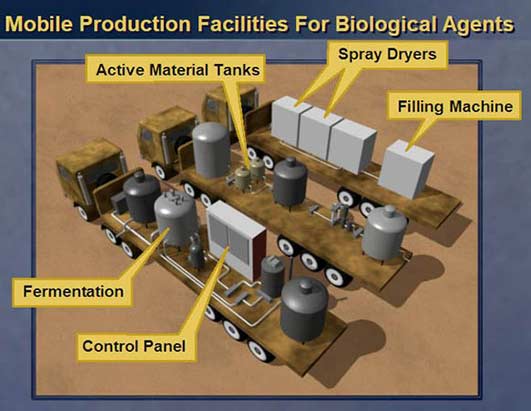 A slide from Powell’s February 2003 presentation to the United Nations showing U.S. intelligence’s rendering of what an Iraqi mobile lab looked like, largely based upon Curveball’s description
U.S. Intelligence Sticks By Curveball Until The Very End

Even before the U.S. invasion, Alwan’s story began falling apart. The first public crack happened when U.N. weapons inspectors went to Alwan’s former work in Iraq in February 2003, and found nothing. During the invasion the U.S. found trailers that they believed were Alwan’s labs. When shown a picture, he claimed those were the ones that he had worked on. The first U.S. reports said that they were mobile labs, but that story soon changed until they eventually reversed course and said they were not. It took years for U.S. intelligence to finally abandon Curveball and say they were wrong however. By 2004 CIA officials came under increasing pressure to drop Alwan’s story. Instead, CIA Director George Tenet and others were worried that if they backed off, it would only damage their already battered reputation as no WMD had been found in Iraq. It wasn’t until May 2004, more than year after the U.S. invasion of Iraq, that the CIA officially said that Curveball’s story was all a lie.

In 2005 the Robb-Silberman committee that was assigned by President Bush to investigate U.S. claims about WMD said that the Curveball incident was a sign of the dysfunctionality of American intelligence. They believed that the DIA should’ve interviewed Alwan in the beginning, CIA analyst’s were quick to accept the mobile weapons lab claim because it fit their preconceived views of Iraq’s weapons program, and the intelligence community failed in their main duty to inform the country’s leaders when they didn’t to tell the White House about their doubts about Curveball. Saddam Hussein had frustrated U.S. intelligence analysts for so long, that they came to believe just about anything negative about Iraq. The entire Curveball incident was a perfect example of this rush to judge Saddam as a threat to America’s security because of his WMD programs. What’s even more important is that this one man’s story played a leading role in America advocating the invasion of Iraq.

Silberman, Laurence and Robb, Charles, “Commission on the Intelligence Capabilities of the United States Regarding Weapons Of Mass Destruction, 3/31/05
- June 19, 2008