Overview of Iran’s Influence In Iraq

It’s a common saying these days that Iran was the winner of the Iraq war. While not quite true, it is very apparent that Iran has wide ranging influence and power in Iraq that it never had before. Most of the media focuses upon Iran’s support of violence in Iraq, but it also has extensive political, economic and cultural ties as well. Together they form a multi-faceted approach towards Iraq. On the one hand they want a Shiite led government that is friendly to Iran and hope to build up its economic ties, on the other, they want to ensure that the Sunnis never return to power and hope to make the U.S. pay for its occupation of Iraq. 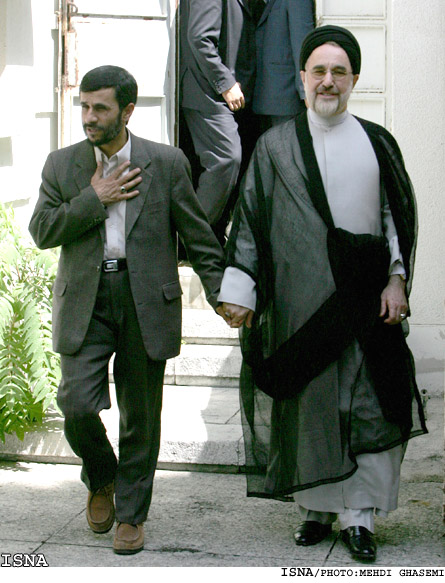 Iranian President Khatami, on the right, originally offered to work with the U.S. in Iraq, but was rejected by the White House. The succeeding President Ahmadinejad, on the left, believes that Iran should confront the U.S. Policy however was ultimately decided to Iran's supreme leader Ayatollah Khamanei
Saddam Hussein was Iran’s long-term enemy, and his removal in 2003 opened up new opportunities for Iran. At first, Iranian President Khatami offered to work with the U.S. in Iraq just as it had done with the invasion of Afghanistan. The Bush Administration however, rejected the idea, believing that it could go it alone in Iraq and saw Iran as another country that needed regime change. Under President Ahmadinejad, Iranian policy became more ideological. He believed that the U.S. could be defeated in Iraq. Either way, it was ultimately up to Iran’s supreme leader Ayatollah Ali Khamanei to decide policy. He and Ahmadinejad saw the U.S. invasion as an opportunity to expand Iranian influence. That policy had two facets. On the one hand they wanted a Shiite friendly government to come to power that would open up the economy and cultural sites to Iran. On the other, they wanted to tie down U.S. forces and punish them, while having the ability to retaliate if Iran was ever attacked, and make sure that Iraq never became a threat again.

Most American reports focus only upon Iran’s military policy because it has a direct impact upon U.S. forces. Right after the U.S. invasion, dozens of Iranian intelligence and Revolutionary Guards Qods Force operatives flooded the country. They also sent in the Badr Brigade, the militia of the Supreme Islamic Iraqi Council (SIIC) that was formed by the Revolutionary Guards during the Iran-Iraq War made up of Iraqi exiles and Iraqi POWs. Together, these forces carried out a wave of assassinations of Iraqi intelligence and military officers, and Baathists that were opponents of Iran. Iranians also established safe houses, front companies and humanitarian groups to shelter their operatives throughout southern and central Iraq.

By 2004, Iran had established its long-term military stance. It continued to support the Badr Brigade that took over much of the Interior Ministry and police after the 2005 elections. It also began recruiting Iraqi Shiites, who increasingly came from Moqtada al-Sadr’s Mahdi Army, and organized them into what became known as Special Groups by the U.S. military. A special unit of the Revolutionary Guards Qods Force called the Ramazan Corps, carried out training and financing in both Iran and Iraq. Iran also used Hezbollah for assistance, sending hundreds of Mahdi Army fighters to Lebanon for training. They were provided RPGs, mortars, Katyusha rockets, anti-aircraft missiles, and the most deadly device, Explosively Formed Penetrator (EFPs) bombs that were capable of destroying any Coalition vehicle. The Special Groups were then used to carry out harassing attacks on U.S. forces in Baghdad and British troops in Basra. Beginning in 2008 they had a new target, the Sunni Awakening/Concerned Local Citizen groups that the U.S. had organized to fight Al Qaeda in Iraq, probably in an attempt to stop the Sunnis from ever regaining power.

Before the 2003 invasion, Iran had extensive ties with many of the anti-Saddam forces, all of which have gained influence since then. The Shiite SIIC and Badr Brigade were formed in Iran in the 1980s. They, along with Iraqi President Talabani’s Patriotic Union of Kurdistan and Kurdish President Barzani’s Kurdistan Democratic Party, all fought on the Iranian side in the Iran-Iraq War. Both the Kurds and the SIIC have become the backbones of Prime Minister Maliki’s ruling coalition. Many members of Maliki’s Dawa Party including former Prime Minister Jaafari, went into exile in Iran during Saddam’s rule as well. Since 2006 Iran has also built up close ties with Moqtada al-Sadr who is currently doing his religious training in Iran. All of these parties gained seats in parliament and positions of power after the 2005 elections that were supported by Iran. 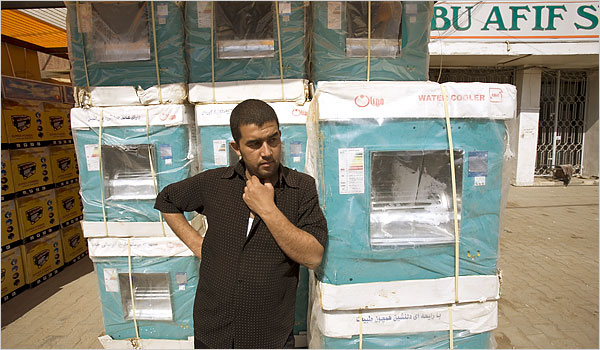 Iranian goods in Baghdad shop
Iran has also been able to build up large economic ties with Iraq since the invasion. Iraq is the number one trade partner for Iran’s non-oil goods. In 2008 it’s estimated that Iraq will import over $2 billion in goods from its neighbor. There is a free trade zone between Iran and southern Iraq as well as a joint Iraqi-Iranian chamber of commerce. Iranian products are everywhere in Iraqi markets except for Sunni areas. Iran also supplies electricity to all parts of Iraq, and has plans to build new power plants in Iraq. Iran refines Iraqi oil, while sending gas and kerosene to Iraq, which are always in short supply. Iran is also paying for reconstruction projects, and in Kurdistan gains many of the government contracts. A huge tourism industry has also emerged with Iranian pilgrims going to the holy Shiite cities of Najaf and Karbala that is estimated to earn up to $25 million a year for Iraq.

The U.S. has become increasingly worried about Iran’s role in Iraq. That comes with fears that Iran is expanding its power in the Middle East, supports terrorism, and is working on a nuclear program. Some in the administrations such as Vice President Cheney are known to support regime change in Iran. Since late 2006, the Americans have mostly focused upon rolling up Iranian military networks within Iraq, while carrying out a series of negotiations with Iranian diplomats.

On the diplomatic side U.S. policy has appeared to be haphazard. Former U.S. Ambassador to Iraq Khalizad was twice given permission to hold discussions with Iran, but was then stopped by the White House. It wasn’t until 2007 that the U.S. finally met with Iran, the first time in 28 years. The talks haven’t produced much either with the U.S. continually accusing Iran of supporting militias, and Iran denying it, with not much else happening. The next round of talks has been indefinitely suspended as Iran has objected to the recent U.S. operations in Sadr City.

The military side has seen much more action. Beginning in 2006 the U.S. launched a military campaign to arrest Iranian agents and kill or capture Special Groups in Iraq. They currently hold several Iranian operatives in jail. In 2007, when the surge started, the number of raids increased with hundreds of Special Group members either detained or killed.

Iran has been able to take advantage of the U.S. invasion of Iraq. Initially, from 2002-2005 Iran and the U.S. had the same goals, overthrowing Saddam, holding elections, and empowering the Shiites and Kurds. Since then, Iran has been maintaining military pressure on the U.S. with attacks by the Special Groups. At the same time, it has increased its ties with the Iraqi government and expanded its economic influence. The U.S. originally claimed that overthrowing Saddam would make dealing with Iran easier because it would be intimidated by U.S. power. It has had the opposite affect.

The U.S. now finds itself in a paradox. It wants to diminish Iran’s role in Iraq, while supporting a government that is made up of two Iranian allies, the SIIC and Kurds that the U.S. also sees as its best friends. At the same time, Iran has not won the war. It now has the U.S. military right on its doorstep. That being said, Iran has been able to benefit from the situation in Iraq with little cost to itself. Pres. Ahmadinejad believes that the U.S. is on the verge of defeat, and Iran is able to play a role in its humiliation. That means while the U.S. is the dominant power in Iraq, it will continue to have to deal with the influence of Iran.

Department of Defense, “Measuring Stability and Security in Iraq,” September 2007

Allam, Hannah, Landay, Jonathan, and Strobel, Warren, “Is an Iranian general the most powerful man in Iraq?” McClatchy Newspapers, 4/28/08

Roug, Louise and Daragahi, Borzou, “Iraq Edges Closer to Iran, With or Without the US,” Los Angeles Times, 1/16/07