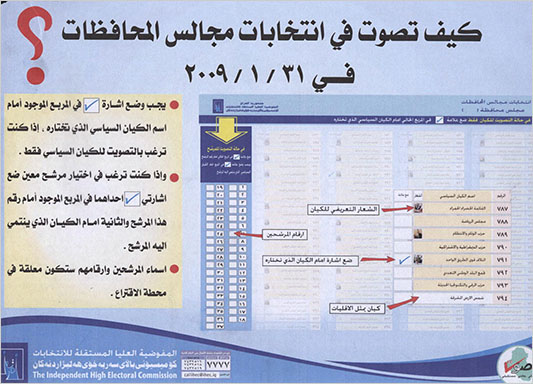 As reported before, Iraq’s 2009 provincial elections will have a proportional, open-list system. Blocs or individuals will have to meet a minimum number of votes to win office, and then provincial seats will be divided up to those that pass this threshold and have the most votes. Blocs that don’t reach the minimum will have their votes given to the winning ones. There is also a quota for women candidates, and for minorities in specific provinces that could complicate matters. The system is obviously weighted towards the largest, most well known lists that have the organization, money, and access to the media to win enough votes to be seated.

As has often been reported, there are a huge number of candidates and parties running in this election. There are 14,431 candidates running for 440 seats. There are more than 400 lists running, along with 125 individual candidates, mostly in Baghdad. Lists are made up of political parties and coalitions. 75% of the lists running this time are new compared to the 2005 election. Some however are old parties just running under a different name. In 2005 for example, Prime Minister Nouri al-Maliki’s Dawa Party was part of the United Iraqi Alliance with the Supreme Council, and a series of independent Shiite parties. This time they are heading the State of Law list that also includes the Dawa Party - Iraqi Organization, the Independent Bloc, the Solidarity Bloc, the Islamic Union of Iraqi Turkmen, the Kurdish Feli Fraternity Movement, and the Shaabani Uprising Bloc 1991. The number of positions available on each council is 25 seats plus one for every additional 200,000 residents in the province. Baghdad will have the most with 57 seats. This will actually reduce the number of slots open. In 2005 the average number of council seats was 41, in 2009 thirteen of the fourteen provinces will average 30. Fewer seats will mean less opportunity for representation by a variety of parties and candidates.

How Iraqis will actually vote is a bit complicated. First, voting will take place in fourteen of Iraq’s eighteen provinces. The Kurdistan Regional Government will decide when elections will be held in Dohuk, Irbil, and Sulaymaniya, while balloting has been postponed in Tamim province. All Iraqis over 18 years old have been automatically registered through their food ration cards. There are around 37,000 voting centers in fourteen of Iraq’s eighteen provinces, with voting allowed from 7 a.m. to 5 p.m. Iraqis will pass through a series of security checks to enter, and then sign in with a monitor. Voters will then have three choices, vote for just a list, select a specific person from a list, or pick an independent candidate. If a person wants to vote for an independent they have to find their name and number on a list posted on a wall chart, and then mark them on the ballot. If they plan to just select a bloc they will be listed on the ballot with their name, number, and party logo. If they want to vote for a specific individual on a list they need to find the person’s name on the wall chart, and mark that as well as their party on the ballot. If they don’t have the list number and the candidates number their vote will be invalidated. The charts with the people’s name on them can be massive. Baghdad for example has more than 2,400 candidates running. When finished they will have their finger dipped in ink, just like in the 2005 election to prevent repeated voting. The big change from that election is the fact that Iraqis have the opportunity to vote for individual candidates if they want. In 2005 they could only pick lists that then selected the people to fill the provincial councils.

When voting is completed on January 31 the Iraqi Election Commission will then determine what parties win seats based upon a proportional system. They will take the total number of votes cast and divide by the number of council seats available to determine the minimum number required to gain a seat. The positions will then be given to the candidates from the winning lists with the most votes. According to the United Nations, this system is used in Germany, Macedonia, Spain and Bosnia.

There are also two quotas that will affect the distribution of seats, one for women, and one for minorities. The election law said that 25% of council positions will go to women, but there were no specifics on how to implement it. The Election Commission decided to give every third seat to women on the assumption that many parties would have no female candidates. The minority quota sets aside six seats for Christians, Yazidis, Sabean Mandeans, and Shabaks. Christians will get one seat in Basra, one in Baghdad, and one in Ninewa. Sabean Mandeans will get one seat in Baghdad, and the Yazidis and Shabaks one seat each in Ninewa.

An example of how this might work is the following. If there were 1,000,000 votes cast for 32 seats, a list would need 31,250 votes to gain one seat. Every additional 31,250 votes that list received would earn them another position. If Maliki’s State of Law bloc won half of the vote, they would receive half of the seats. The eight male candidates and four women from that list that received the most votes would then go on to hold office. If this were Basra, the top vote getting Christian group would get one seat as well.

There are a couple points that could complicate the results of this election. First, the system is obviously biased towards the larger parties that have the name recognition, organization, money, and access to the media to gain enough votes to reach the minimum. The election law also says that parties that fail to reach that amount will have their votes given to the ones that do. That may lead to bitter feelings amongst both lists and voters who feel cheated by the results. The two quotas will also mean positions will be given to candidates that don’t have as many votes as other possible winners. The women quota especially, may shut out some smaller parties who have no female candidates. Last, while much has been made of the 14,000 people running for office, it’s not known how many of them are actually known by the public, and whether they are qualified. Maliki’s list is expected to do well because of the Prime Minister’s newfound popularity, but will that mean those candidates will do any better than the current provincial councils, many of which have proven to be corrupt, incompetent, and full of cronies?

For more on the provincial elections see:

Jockeying For Position Before The Provincial Elections In Diyala and

Importance Of The Upcoming Provincial Elections

Maliki's Tribal Support Councils Appear To Be Paying Off

Who Rules Iraq's Provinces And How Are They Doing?