On November 20, 2009 the head of the Sons of Iraq (SOI) in Baghdad’s Fadhil district, Adil al-Mashhadani, was sentenced to death by an Iraqi court. He was charged with the murder of a girl whose mother complained to him about the violence in the neighborhood during the sectarian war. Mashhadani was originally arrested in late March 2009, which set off a day of fighting between Iraqi and U.S. forces, and Mashhadani’s SOI. The SOI leader shows both who the U.S. was willing to work with during the Surge as well as Baghdad’s ambivalent attitude towards the Sons of Iraq program.

In the summer of 2007 General David Petraeus and his top advisers met to discuss a new Sunni policy. It was decided that the U.S. would try to replicate the Anbar Awakening in Baghdad, and other Sunnis areas in central and northern Iraq. In 2005 the Sunni tribes of Anbar had begun to turn on Al Qaeda in Iraq because they no longer perceived them to be allies, but as a threat since the Islamists were attempting to take over the insurgency and impinge on many of the tribes’ businesses. This inspired the Sons of Iraq (SOI) program where American forces began creating ties with insurgents and tribal groups that were willing to fight Al Qaeda. 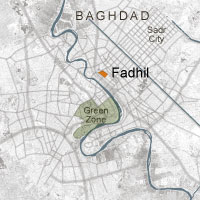 Fadhil is a small neighborhood in eastern Baghdad near the Tigris River. The area was known for having a very active insurgency in 2006-2007 that was battling Shiite militiamen from Sadr City, which was just to the northeast, and carrying out attacks on the Americans. Adil Mashhadani was a cell leader there. He was a former member of the Republican Guard, and originally joined the fight against the Americans in Fallujah in 2004. In April 2007 Mashhadani’s forces were devastated in a fight with the U.S., followed by Al Qaeda attempting to replace him. Faced with the triple pressure from the Islamists, the Shiites, and the Americans, he decided to switch sides and work with the last. By May the U.S. battalion in Fadhil had organized Mashhadani's men into a SOI unit, and had also been able to work out a deal with the Shiites in the surrounding areas. By June Mashhadani was in firm control, creating his own little fief supported by U.S. troops and reconstruction money. In October Al Qaeda tried to strike back at him with a failed suicide attack. That led to a month’s long battle that expelled the Islamists from the rest of the area. By December 2009 the U.S. got him to reluctantly work with the Iraqi Army and government. This earned Mashhadani the respect of the first two U.S. officers to work with him, who protected him from officials in Baghdad that wanted him arrested for murder.

At the very end of December 2008 things started to change. A new U.S. unit began receiving information about Mashhadani’s men taking part in extortion, rape, and insurgent activity, while it was transferring Fadhil to Iraqi control. This caused tensions with Mashhadani who didn’t want to give up his power. He also complained that hardly any of his men were getting jobs or being paid by the government as promised. That all ended at the end of March when he was arrested by Iraqi Special Forces. His SOI unit, which only numbered about 150 men, was disbanded afterward.

Mashhadani’s detention and the subsequent fighting set off alarm bells in the U.S., but got a much more mixed reaction within Iraq. Many American commentators feared that his arrest would set off a wave of fighting between the government and the SOI since the Prime Minister had never approved of the program since its inception. Sunnis expressed both fear and approval. An SOI commander in Dora, Baghdad for example, was afraid that Iraqi forces would arrest him, while another in Adhamiya said that Mashhadani had been killing people and extorting money and therefore deserved what he got. Sheikh Ahmed Abu Risha of the Anbar Awakening chimed in that Mashhadani had been breaking the law, and called for an end to speculation that his arrest would undermine security in the country. His subsequent death sentence has created the same sort of mixed feelings amongst the SOI.

Adil Mashhadani was the type of man that the U.S. was willing to work with to bring an end to the sectarian war. The question has only been raised by a few like Nibras Kazimi of the Hudson Institute and Talisman Gate blog, but could the U.S. have avoided this whole ordeal if it had decided to crush the entire insurgency rather than attempting to divide and conquer it? After the Samarra bombing in February 2006, which set off the civil war, the Sunnis quickly realized that they were going to lose, as they were outnumbered 3 to 1 by the Shiites. At the same time Al Qaeda was focusing their violence on fellow insurgents who would not follow their lead. The Americans took advantage of this situation to cut a short-term deal with Sunnis like Mashhadani who were willing to turn on the Islamists to save their own skins, which created a long-term problem with the Iraqi government who never approved of the U.S. policy. Instead they could’ve let Mashhadani and Al Qaeda battle it out, and then swept up the remains. The problem for General Petraeus was that would’ve taken longer and led to more fighting at a time when he was under intense domestic pressure in the U.S. to show results as quickly as possible. The Sons of Iraq program appeared to be a way to do that, and the U.S. and Iraq are still facing the consequences as the Americans are trying to ensure the SOI get as many jobs as possible from a government that lacks both the will and capacity to do so.

For the time being, I consider the following a tad more important. http://www.pressdisplay.com/pressdisplay/showlink.aspx?bookmarkid=93LTS4VFI9B5&preview=article&linkid=2c9baf29-a012-4022-8c69-4d63961f4953&pdaffid=ZVFwBG5jk4Kvl9OaBJc5%2bg%3d%3d

However, I was wondering what you think about the interrelation of the two.

I wrote about that yesterday. The elections may be pushed back as far as March 2010 now. There's no connection with the integration of the SOI really. Hashemi gambled with a veto and it backfired on him because the additional seats that the Sunnis were going to get under the original version of the bill, got taken away with the amended version.