Human Rights Watch: Ninewa’s Minorities Under Pressure From Both Sunni Insurgents and Kurds

In November 2009 Human Rights Watch released a new report detailing the plight of minorities in Ninewa province entitled “On Vulnerable Ground.” The report covers the history of successive governments in Baghdad to Arabize Ninewa by pushing out minorities and Kurds and replacing them with Arabs, and then the ascendancy of Kurds there after the U.S. invasion. They turned around and tried to Kurdicize those same regions to advance their plans to annex the disputed territories there. At the same time, the Sunni Arab insurgency has targeted minorities for being non-believers or cooperators with the Americans. Minorities such as Christians, Shabaks, and Yazidis are therefore in a precarious situation being pressured from all sides to either leave or comply with stronger forces.

“On Vulnerable Ground” starts with some historical background to Ninewa. Beginning in the 1930s the Iraqi central government started a program to Arabize Ninewa, which has historically been one of the most diverse areas in the country. It is the home to Arabs, Kurds, Christians, Shabaks, and Yazidis, especially in an area known as the Ninewa plains, which are the districts immediately to the east of Mosul. In the 1970s Baghdad stepped up its efforts to move Arabs into Ninewa and push Kurds and minorities out that only got worse under Saddam Hussein. After the Gulf War in 1991 Baghdad tried to pressure Kurds and minorities to register as Arabs, and would not give birth certificates to babies with non-Arab names for instance. They also pressured minorities to join militias and perform other tasks to prove their loyalty or face expulsion. Many Kurds and minorities moved to Kurdistan, which had gotten its autonomy in 1991. 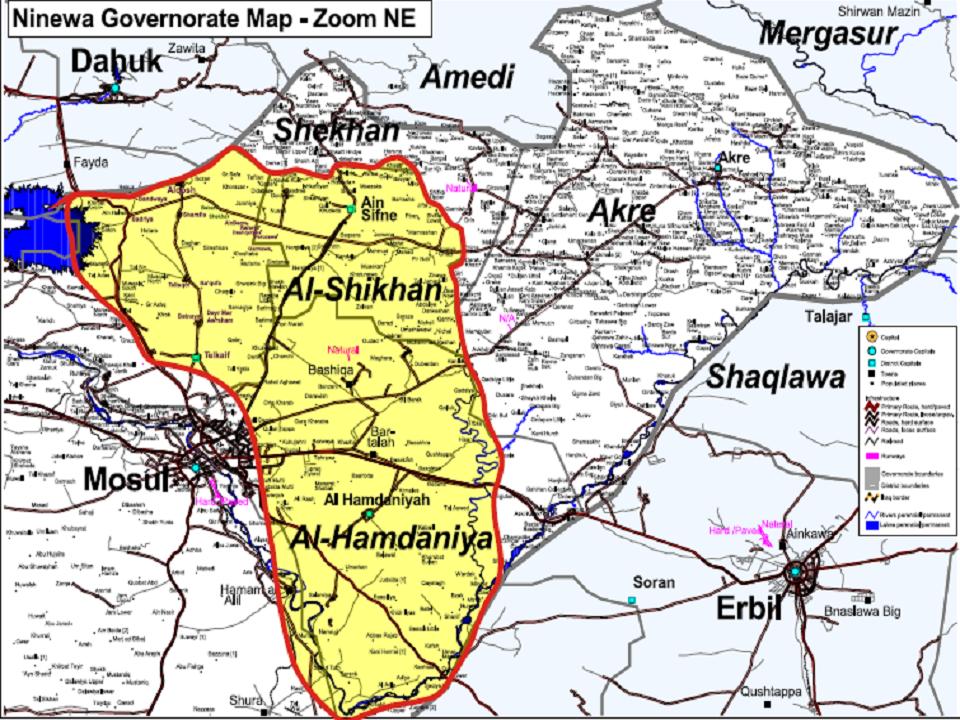 Map of the Ninewa Plain

After the U.S. invasion, the Kurdish peshmerga swept south into Ninewa with U.S. forces. Many Arabs who had moved there under the government’s programs fled before the advance. In the days after the fall of Mosul, the capital of Ninewa, the peshmerga also began kicking out Arab families from towns in the surrounding areas. These factors together increased the ethnic tensions in the province. In all the areas where the Kurds occupied they eventually established their influence through the presence of their peshmerga forces and control of the administration. The divide between Arabs and Kurds intensified after the 2005 provincial elections, when the Sunni Arabs decided to boycott. This allowed the Democratic Patriotic Alliance of Kurdistan, which was made up of the two major Kurdish parties, the Patriotic Union of Kurdistan and the Kurdistan Democratic Party, to win 31 of the 41 council seats in Ninewa.

The ascendancy of the Kurds, and the displacement and loss of power of the Sunni Arabs directly led to the growth of the insurgency in Ninewa. As reported before, Mosul remains the last urban stronghold of the Sunni militants. They in turn, have carried out some of the largest attacks in the Iraq war against Ninewa’s minorities. Christians, Yazidis, and Shabaks have all been singled out for mass casualty bombings, and targeted killings, taking thousands of lives, and forcing many minorities to flee the region. In one spate in October 2008 for example, the Christians of Mosul faced an organized campaign of murder and intimidation to drive them out of the city. 40 were killed, and 12,000 fled Mosul. Arabs and Kurds exchanged blame for the attacks, but Human Rights Watch’s interviews led them to believe that it was definitely the work of Arab insurgents. Some of the largest bombings in Ninewa this year have also been against Yazidis and Shabaks. Sunni militants consider all three groups, Christians, Yazidis, and Shabaks, to be non-believers or collaborators with the Americans.

From 2005 to the present the Kurds also carried out a systematic campaign to co-opt, cajole, threaten, and intimidate Ninewa’s minorities to support the Kurdistan Regional Government’s (KRG) plans to annex the disputed areas in the province. This has followed a two-pronged carrot and stick approach. First, the KRG has spent millions of dollars on minorities to win over their loyalty and create patronage systems. For example, the KRG’s Finance Minister Sarkis Aghajan, a Christian, was ordered by the KRG Prime Minister Nerchivan Barzani to build churches, fund Christian community organizations, and create Christian militia groups. They also used these means to undermine those who opposed the KRG’s plans. Second, the Kurds have used pressure and intimidation. Christians told Human Rights Watch that they were encouraged to sign forms calling for the annexation of Ninewa’s disputed areas by Kurdistan. The KRG also considers Yazidis and Shabaks to be Kurds, and have pressured them to register themselves as such to gain aid. Minority leaders and activists have also been targeted with the Kurds implicated in the attacks. Two Yazidi activists opposed to Kurdish aims were arrested and tortured for six months in 2007. The leader of the Shabak Democratic Gathering was killed by gunmen in July 2008 a few meters from a peshmerga checkpoint who did nothing before, during, or after the attack. Another Shabak politician claimed he was attacked by men wearing Kurdish uniforms before the 2009 provincial elections. Other minorities said they were stopped from attending political rallies by anti-Kurdish groups before the 2009 elections, and were warned that if they didn’t vote for the Kurdish Fraternal List they would lose their homes and jobs. Many of these tactics reminded Human Rights Watch of Saddam’s and earlier Arab government policies. Both the Kurds and minorities were victimized and expelled from Ninewa under the Arabization program. Now the Kurds are repeating many of these same policies to annex the northern regions of Ninewa to Kurdistan.

The 2009 elections turned out to be a major setback for the Kurds’ plans. They lost to the Arab led al-Hadbaa party who took all of the provincial offices, shutting the Kurds out of power, and calling for the withdrawal of the peshmerga. In response, the Kurdish Fraternal list is boycotting the provincial council, have refused to allow Arab officials to carry out their duties in Kurdish controlled areas, and have threatened to break away 16 towns and districts from Ninewa and create their own administration in protest. In June 2009 the KRG made the situation worse when it passed a draft constitution that claimed all of the disputed areas in Ninewa as part of Kurdistan, and said that the peshmerga had the right to operate in Ninewa.

In the end, Human Rights Watch is very worried about the future of minorities in Ninewa province. They are concerned as well, as a Christian leader recently said he is worried about increased attacks on his community in Mosul as Christmas approaches. They are facing the violence of Sunni insurgents, and the forced assimilation and co-option by the Kurds. They are also caught in the middle between the dispute between the central government, the al-Hadbaa provincial government, and the KRG for control of the disputed territories in Ninewa. Human Rights Watch’s findings are also not new. In December 2008 two similar reports were released, one by the United States Commission on International Religious Freedom on Iraqi minorities throughout the country, and another by the Brookings Institution and the University of Bern on minorities and displacement. They both noted the relentless attacks minorities have faced at the hands of insurgents, and the tactics the Kurds have employed against them. Due to these circumstances, Iraq’s minorities have been left with only two real options. First, many have fled becoming displaced or refugees. 20% of Iraq’s refugees for example are believed to be Christians. Second, those that have stayed in Ninewa have tried to align with one of the more powerful actors, whether it be the Kurds, or now the central government and the al-Hadbaa provincial council. None of these provide the protection and rights Ninewa’s minorities deserve, and as long as the divide exists between the KRG and Baghdad their situation is unlikely to get any better.

I have some doubts about the report, although it's certainly true minorities are crushed between Arabs and Kurds. Looks like they have been also talking with these groups allied to Al-Hadba, which are set up to oppose Kurdish influence, including the groups being harassed by Kurdish security forces:
http://vvanwilgenburg.blogspot.com/2009/04/minority-lobby-organizations-stop.html

See their quote:
43 In a joint statement issued on July 10, 2009, four groups representing Shabaks, Yazidis, Chaldo-Assyrians, and Turkmen contended that the Kurdish constitution opens the door to further conflict and “will destabilize the Middle East for centuries and result in disastrous outcomes.”

Yazidis, by most estimates, far outnumber Muslim Kurds in Nineveh, making the Kurds dependent on their support to bolster their claims to the region. And the Yazidis have largely given it; almost all of them who won in the election were members of Kurdish political parties. In exchange for that support, the newly victorious Yazidis are demanding a greater degree of Yazidi power in Kurdistan.
http://www.nytimes.com/2009/04/06/world/middleeast/06yazidis.html?_r=1&partner=rss&emc=rss

The report also doesn't mention the victory of the Isthar slate in the provincial elections, only talk sabout Al-Hadba and the Brotherhood list.

"Last January the Kurdish supported Assyrian Isthar slate won the provincial elections in the Mosul province and the Christian seat in Bagdad. Immediately Assyrian diaspora media claimed voters were pressured to vote for the Isthar slate. But it seems that the religious non-islamic sect of Kurdish Yezidi’s in Mosul didn’t vote for the KRG."
http://vvanwilgenburg.blogspot.com/2009/03/barzanis-visit-to-vatican-annoys.html

Human Rights Watch interviewed only 57 men and women of the Chaldo-Assyrian, Yazidi, and Shabak
communities in Arabic.

HRW's historical analysis, is not based on historical sources, but other reports. Especially it's note on minorities misses some points on the background of Yezidi's (Kurmanji speaking) and Christians (their split went in a different way).