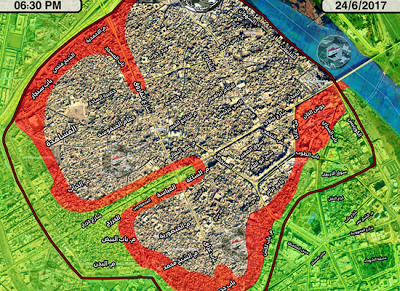 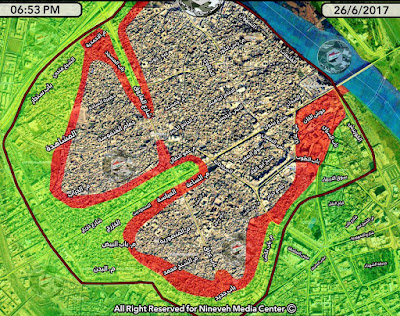 Mosul was still recovering from the surprise attack by Islamic State sleeper cells in three liberated areas of west Mosul. On June 25 IS elements attacked Tanak, Yarmouk and Rajam al-Hadeed in the western section of west Mosul. There were only a few fighters, maybe 20 or more, but they were able to sow a huge amount of chaos. They set fire to cars and buildings, and led to hundreds of people to flee. The Golden Division was called in to kill and capture the insurgents. Yarmouk was surrounded, a curfew imposed, some remaining IS members were holding hostages inside a house, and there might have been scattered clashes still going on as well. The Iraqi forces (ISF) were conducting mass arrests in nearby Rashidiya in fears of more IS cells operating there. An investigation was launched by the ISF to discover what happened. Preliminary press reports found that Tanak was supposed to be held by a tribal Hashd unit, but actually had no security for the last twenty days.


IS sleepers were operating in other parts of the city and Ninewa as well. A suicide bomber was arrested in Farouq in the Old City trying to hide amongst people fleeing the fighting. In Nabi Younis in east Mosul people seized two insurgents before they could carry out an attack. They were stabbed to death, and then a crowd demanded that the security forces string them up to an electricity pole to warn others. In Zuhur, also in the east, a suicide bomber was arrested. Southeast of Mosul in Qayara, a tribal Hashd unit killed a suicide bomber at a checkpoint. Every day since June 23, IS has been carrying out attacks amongst displaced and in areas of the city and towns in the province under government control. These could be diversionary attacks to try to draw forces away from the last bastions of Mosul that are still under militant control. They could also be a reaction to the imminent liberation of the city. Either way, these operations are increasing even if most of them are not successful; and sowing fear in sections of Mosul.

The ISF were still making slow advances in the Old City. The Farouq area in the center was finally taken. The Federal Police seized an IS hospital in Bab al-Baid, which was declared freed before, were trying to surround Sargkhana, and there was fighting in three other areas. The plan is to drive from east to west and reach the Tigris River to divide the Old City in two. Another thrust is moving from north to south to further break up the district. That is meant to isolate the defenders, and make it easier to eliminate them in pockets.

With the battle almost over the Iraqi commanders were tripping over each other trying to claim how close final victory was. The Golden Division’s General Abdul Ghani al-Asadi claimed that Mosul would be freed in days, and that IS had lost its fighting spirit. He went on to say that the militants only controlled around two kilometers of the Old City. On the other hand, Federal Police chief General Raed Shakir Jawadat said only 800 meters were left under IS. Before that the Joint Operations told the press just 1% of the district was left to be freed. The Iraqi generals are chomping at the bit waiting for the fighting to come to a conclusion. Unfortunately, that is leading officers to claim areas being freed when they aren’t, and exaggerating the amount of the city left to be taken.

Bas News, “The army opens an investigation into the infiltration of old Mosul into 3 liberated neighborhoods,” 6/26/17
- “Iraqi Military Close to Declare Full Liberation of Mosul,” 6/26/17

Iraqi Broadcasting Network News, “The Anti-Terrorism Forces Free Al-Farouq Neighborhood In Mosul And Raise The Iraqi Flag Over It,” 6/26/17
- “Asadi: In A Few Days We Will Announce The End Of The Battle Of Mosul,” 6/26/17

Al Sumaria, "Resident of Mosul kill a Daash member stabbing him with knives and called for Suspending him from an electricity pole" 6/26/17