Review The Caliphate At War, Operational Realities and Innovations of the Islamic State 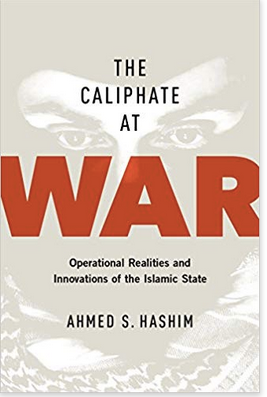 Ahmed Hashim published two earlier books on the Iraqi insurgency. He took that background and applied it to writing about the Islamic State in The Caliphate At War. It contains some great research to give a well rounded examination of the group. It covers how IS emerged from the larger Sunni resistance to the U.S. occupation of Iraq, the role of Abu Musab al-Zarqawi as its first leader, how many Sunnis and insurgents turned against IS, and how it rebounded afterwards when it seized territory in Iraq and Syria in 2014. An explanation of the group’s organization is given, along with a chapter on its battle tactics. Finally, its ideas and administration of the caliphate it declared are analyzed. Overall, Hashim gives a very good overview of the Islamic State and The Caliphate At War is an excellent start for anyone interesting in the group.


Hashim begins with how the Islamic State emerged out of the Iraqi insurgency. The resistance to the U.S. occupation came from Sunni resentment at losing power and wanting it back. Added to that were former soldiers who were angry when the Americans disbanded the military and would not pay their pensions. There were originally five different groups that took up armed resistance: former regime members, nationalists, tribes, Islamists, and Abu Musab al-Zarqawi’s group Tawhid wal-Jihad. Zarqawi’s fighters was almost all foreigners that came with him from Afghanistan, but he found a place within the insurgency as Islamism and Salafism had been growing in Iraq since the 1990s as it did across the Middle East. Their followers operated largely underground under Saddam, and then came out into the open after 2003. That’s shown by the fact that almost all the insurgent groups eventually took up some form of religion in their ideologies after 2003. Hashim really showed off the depth of his research here. He collected a great number of quotes for example, by different insurgents about why they took up arms. He also navigated through the ideological battles between the different groups.

Zarqawi was himself a product of the growth of Salafism in the Middle East, and added his own ideas which greatly differed from many of his contemporaries. He was radicalized in Jordan, going twice to Afghanistan before moving to Iraq after the 2001 U.S. invasion. He was known to be a man of action who saw himself in an existential struggle against non-believers. He believed that Islam was in danger and the Americans and the Shiites were the main enemies. He claimed the latter had forsaken their religion and were a Trojan house helping the U.S. Iraq therefore provided the perfect opportunity to confront both. Fighting the Shiites eventually became his main priority as he planned to start a civil war by relentlessly attacking them, hoping that they would retaliate against the Sunnis and drive them into his arms. Those that did not join he had utter contempt for as well. Zarqawi would rely upon several Islamist thinkers to justify his ideas. One was Abu Abdullah al-Muhajir who was active in Afghanistan in the 1980s. He had no problems attacking fellow Muslims who he believed could be excommunicated for not following their faith. He also cited Ibn Taymiya who was an Islamist philosopher who wrote in the 14th Century that Shiites were more loyal to other religions than Islam. This put Zarqawi at odds with many of his contemporaries. Sheikh Abu Muhammed al-Maqdisi for instance, Zarqawi’s original mentor in Jordan thought that Zarqawi was not ready for leadership, and Maqdisi did not believe in attacking fellow Muslims. Al Qaeda had similar convictions and chided Zarqawi about killing Iraqis when he should be winning their support. Again, Hashim does a good job explaining Zarqawi’s ideas, and how he was different from many other jihadists. His utter hatred for Shiites set him apart, and it cost him. His group proved completely incapable of defending Sunnis when the civil war did begin. Killing Iraqi civilians also won him few friends. That would eventually lead to many in the Sunni community and within the insurgency to turn on him leading to his group’s first major defeat.

Zarqawi and his successors had constant problems with the rest of the insurgency and other jihadists. As early as 2004 there were differences between Zarqawi and other militants during the two battles of Fallujah over tactics and control of turf. By 2005 that became more pronounced as tribes in Anbar slowly but surely turned against what had become Al Qaeda in Iraq over its tactics, its imposition of strict Islamic rules, and elbowing into tribal businesses, eventually leading to the Anbar Awakening. In 2006, after Zarqawi’s death, Al Qaeda in Iraq announced an Islamic State, and that it was becoming the Islamic State of Iraq. Not only that, but it demanded that all the other militants pledge loyalty to it. This was another move that was condemned by other groups, and led to armed clashes. The Iraqis believed that this had nothing to do with the liberation of Iraq from foreign occupation, but was an internationalist agenda pushed by foreigners. By 2007, many of these tribes and organizations were turning to the Americans to fight ISI, which led to the Sahwa. Together with the Awakening this led to a huge loss in followers and territory, and ISI’s eventual defeat. It did not give up however and made a return starting in 2011 when the Americans withdrew from Iraq. It then expanded into the Syrian civil war and created another controversy when it announced that Jabhat al-Nusra was part of it, and that it was now the Islamic State of Iraq and Syria. That led to more divisions within the jihadist movement, and its eventual split with Al Qaeda. Finally, in 2014 it announced the return of the Caliphate after it conquered Mosul, and that it would simply be known as the Islamic State. Like the original Islamic State of 2006 it insisted all the other insurgent groups join it, and was again attacked by other Islamists who did not believe it was the time to declare the Caliphate. Zarqawi and his followers proved to be extremists amongst extremists. He came to Iraq to impose his agenda regardless of what the Iraqis wanted. When he passed and Iraqis eventually took over the organization, they had become adherents of his ideology. They all believed in the return of the Caliphate as part of their mission to save Islam. That along with his tactics led to IS’s first defeat in 2007-08. The group believed in enduring however, and made an amazing comeback after 2011. Even then it couldn’t help but pick fights with other groups both within and without Iraq. What Hashim didn’t note was that it outlasted all the other groups in Iraq despite all the problems, many self-inflicted, it encountered.

Announcing the Caliphate in 2014 led to IS’s second downfall. Hashim explains that there was no way that the Islamic State was going to last when a loose international coalition was formed against it. Initially IS thought that it could sustain its state with all of the money that it seized after taking Mosul, and the population and resources that it now controlled in Syria and Iraq seemed to provide it a tax base. That was illusionary. As the Iraqis re-organized and went on the offensive however with the backing of the U.S. led Coalition and Iran, IS would lose territory and commit more and more to the war. That meant that services were neglected. It also lost the core of its fighters in the war, and became more and more repressive to control people. Hashim wrote his book in the middle of 2017 so he didn’t see the final defeat of IS, but that was apparent far before that. The question is if it can return again like it did before after Iraqis and Syrians have seen what its dream of a state really means.

Finally, Hashim has an interesting chapter on the Islamic State’s way of warfare. Zarqawi realized that his group was facing a materially superior enemy in the United States, and that the geography of Iraq was different from Afghanistan or Chechnya where insurgents could carve out areas to operate freely in. Zarqawi therefore advocated for unrestricted warfare focusing upon Iraqi civilians and government officials because the Americans could not be directly confronted. The dilemma was Tawhid wal-Jihad and its successors struggled mightily at first. They were bad at small unit tactics for example. That forced Zarqawi to constantly look for areas where he could set up camps to train his cadres like those that existed in Afghanistan. He found some areas in Anbar to do that, but was eventually driven out and relocated to Diyala. After the U.S. withdrawal and the civil war in Syria started there was ample room to find areas to be based out of and build up fighters. This led to the progression from terrorist operations to semi conventional units by 2014. In fact, IS created specialized forces like engineers and commandos. It was able to attack cities and military bases. Its control of territory also allowed it to create specialized weapons like armored car bombs on an industrial scale. When it was thrown on the defensive it proved adept at urban warfare. The war however ground down its men, and Coalition air power meant that it wasn’t able to mass its forces like it had before. Attrition also meant it had to commit younger and younger fighters that were inexperienced. Finally, the winding down of its state led it to turn towards terrorism once again, not only in Iraq and Syria but internationally as well to try to prove that it was still relevant while it was losing. Mao Zedong and other practitioners of guerrilla warfare noted that groups had to develop a range of military capabilities, and that was exactly what the Islamic State did. It proved amazingly adaptable and innovative. It now has a wealth of institutional memory on how to conduct warfare, but its new problem is that it has lost most of its men, and all its territory. It has to once again find room to set up camps so that it might rebuild its manpower. Without that it can’t hope to return to the level of operations it once maintained before.

The one drawback of The Caliphate At War was that Hashim felt it necessary to have an entire chapter documenting the history of Iraq from ancient times to the present. Is it really necessary to describe the Sunni-Shiite divide, the history of the Ottomans, the Sykes-Picot agreement, the rise of the Baath, the Iran-Iraq War, the Gulf War, etc. in order to understand the Islamic State? Little if any of this is later referenced to give context to the group, so it seems like a waste.

In the end, Ahmed Hashim produced a very good book covering all you would want to know about the Islamic State. He put in a great amount of research and it shows in his writing. He’s able to shift from the ideology of the group to its fighting tactics to its place within the Iraqi insurgency. He also warned that the territorial defeat of the Islamic State was not the end of the group. He wrote that was just the end of one chapter in a long and on going story of the organization. His only real fault is the history chapter that is gratuitous. Otherwise, this is really a standout book about IS amongst a sea of releases that have come out since 2014.