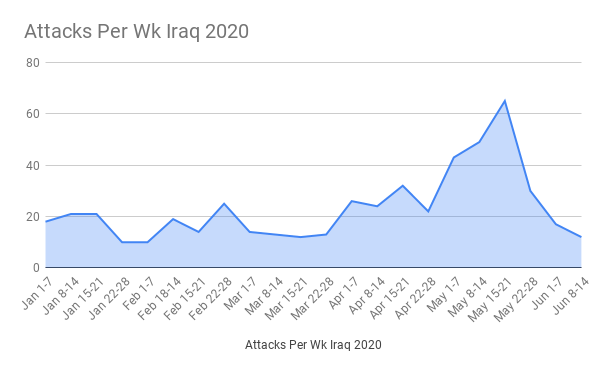 For the third week in a row violence declined in Iraq. There was a large jump in attacks in May as the Islamic State announced a new offensive. That appears to be over for now.


There were a total of 16 incidents reported in the media during the second week of June in Iraq. 4 of those were rocket attacks by pro-Iran groups in Baghdad. The Baghdad International Airport, the Green Zone, and Taji Base twice were hit. This coincided with the start of negotiations between Baghdad and Washington for a new security agreement. Hashd units aligned with Tehran are trying to send a message to the U.S. that they can be harassed at any time and they are not wanted in the country. This is a long time goal of Iran to expel the Americans. That left 12 incidents by the Islamic State down from 17 the first week of June, 30 the fourth week of May and 65 the third week of May. For the week there were 4 incidents in Diyala, 3 in Ninewa, 2 each in Kirkuk and Salahaddin, and 1 in Babil.

There were 25 casualties. That consisted of 2 civilian and 8 Iraqi Security Forces (ISF) deaths and 3 Hashd al-Shaabi, 4 ISF and 8 civilians being wounded. Diyala had the most casualties with 14.

IS hit the Jurf al-Sakhr district once again in northeast Babil. An IED wounded 2 Hashd. That district was emptied of civilians by the Hashd and turned into a major Kataib Hezbollah base. That’s the reason why it’s attacked every month by the insurgents.

There were four incidents in Diyala. There was an infiltration attempt in the Naft Khanna basin, a village was hit by mortar fire in the Jalawla sub-district, and the village of Dara was attacked leaving 8 dead and 6 wounded. All three of those incidents took place in the Khanaqin district in the northeast. The fourth was a mortar attack on a village in the Muqdadiya district in the center. The government continued sweeps through those two districts since they are the main support areas of the insurgents in Iraq. On June 14 there was an sweep through the Mijas area after the attack upon Dara, along with an operation in the Sansal basin in Muqdadiya.

An army position was hit by mortars in the Daquq district in southern Kirkuk leading to 1 dead soldier and 4 wounded, and IS set up a fake checkpoint on the Kirkuk-Baghdad road attempting to kidnap the head of the 36th Hashd Brigade. That failed. Almost all the attacks in Kirkuk occur in the south where the insurgents were never expelled during the war.

Ninewa had three incidents. A sticky bomb went off in the Qayara district in the south, and there were two IEDs in and around Mosul. The government also conducted three sweeps, one by the Syrian border, one around Ninewa Island, and the third in the southwest desert. These rural areas are mainly used to infiltrate men and material into the province from Syria. The security operations are aimed at interdicting these operations.

There were two attacks in Salahaddin. A checkpoint was attacked along with the deputy governor’s house both of which occurred in the Ishaqi district in the south. Security forces also went through Tikrit Island and an area in the east. The province saw a large spike in violence last month, but like the rest of the country incidents have since declined.
Security Incidents In Iraq By Province

AIN, "The crowd announces the launch of Island of Ninewa sweep to eliminate the remnants of ISIS," 6/8/20,

Baghdad Post, "Armed attack on the house of the Deputy Governor of Salahaddin," 6/13/20

Al Maalomah, "The crowd carries out an inspection to pursue ISIS east of Salahaddin," 6/13/20,

Shafaaq News, "A missile landed in the vicinity of Baghdad International Airport," 6/8/20
- "Mortar bombing kills an Iraqi soldier and injures others in Kirkuk," 6/10/20
- "A policeman was killed by an ISIS attack in Salahaddin," 6/9/20
- "A regimental commander in the crowd survived an assassination attempt on the outskirts of Kirkuk," 6/12/20
- "Wounded by two explosions in Mosul," 6/14/20