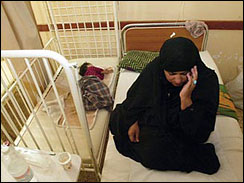 The Iraqi Ministry of Health, Babil province, and several others have reported an outbreak of cholera. Cholera comes from drinking contaminated water, and leads to diarrhea. In extreme cases, individuals can become dehydrated and die. Babil province was the first area to find suspected cases. Officials there said ten people had died, and up to 300 were possibly sick as well. The provincial council there held a special session where they said local departments such as health, water, and sewage needed to immediately respond to the problem. Officials in Maysan province have reported a total of six cases there and 64 suspected ones. The director of public health in Basra warned of a possible outbreak there as well. Babil’s provincial council also criticized Baghdad for not providing adequate aid to deal with the crisis.

The central government’s agencies have tried to respond. The Health Ministry held a press conference where they confirmed that 27 cases had been found so far across the country. Seven were found within the last week. The Ministry said there were 5 cases in the Baghdad suburb of Abu Ghraib, one in Baghdad, and one in Maysan province. A Ministry official said that 90% of the cases were diarrhea. Babil’s provincial council however, said that the outbreak is much larger than is being reported.

The cholera outbreak might be caused by the country’s drought. As reported earlier, Iraq is currently facing one of the worst droughts in years. In 2007 the country received 30% less rain than normal, which has devastated farm areas across northern and central Iraq. Farming is the largest employer of Iraqis. It’s also cut hydroelectric power production, led to the deaths and killings of livestock, and forced some farmers to abandon their fields for towns and cities looking for work. Now, it may be cutting the availability of drinking water, leading some to turn to untreated sources. That could be the source of the recent cholera cases.

Iraq last faced a cholera outbreak in August 2007. Kirkuk was hit the hardest with 2,309 cases, followed by Sulamaniyah with 870. Irbil, Dohuk, Diyala, Salahaddin, Ninewa, Wasit, Baghdad, and Anbar provinces were also affected. It resulted in the deaths of fourteen people. It took until October 2007 for the Health Ministry to announce that it had the situation under control. It will be interesting to see whether the government’s response will be better this time as it is flush with oil money, and has launched an ambitious development plan and budget this year.