How Much Oil And Refined Petroleum Products Does Iraq Actually Produce? No One Knows Iraq is an oil dependent country. 95% of its revenues this year will come from the sale of petroleum. It recently signed twelve deals with international energy companies, which it hopes will boost its oil production from 2.4 million barrels a day currently to 12 million barrels by 2011. Later this year the country also plans to put up four planned refineries and its existing ones for auction to boost its output of gas, diesel, etc. How much Iraq is able to produce of these products then, is of outmost importance to the country’s financial well being. The problem is no one is sure how much oil is being pumped, and how much fuel is being made because of a lack of oversight and widespread corruption.

One major issue that Iraq’s oil industry faces is the lack of adequate metering. In 2007 the Oil Ministry began setting up meters across the country to measure how much petroleum and refined products were produced. A December 2008 audit found that only 33% had been installed by then. A July 2009 report discovered that the situation had barely improved. At the North Oil Company only two of 34 meters were functioning. The Maysan Oil Company, the South Refinery Company, and the Dhi Qar refinery had none. 59 meters were supposed to be installed in the refineries in southern Iraq, but there was no letter of credit to purchase them. There have been press reports that at the Baiji refinery in Salahaddin province the meters either didn’t work or were fixed by corrupt workers. In early 2010 the Oil Ministry presented a plan to finish all of its metering work by the end of 2011, but that has now been delayed. Even when and if Iraq installs all these devices it will not solve its problems. The country uses three types of meters that are not integrated, are not always calibrated, and have low reliability. Without good reporting of its production rates, there’s no way Iraq can fully account for its oil industry. Meters are supposed to solve this problem, but there are questions about whether they will ever be fully installed, and even if they are, can they be trusted.

Corruption also plagues the petroleum business. The Inspector General of the Oil Ministry reported that the industry suffers from a lack of management, control and oversight. That opens up plenty of opportunities for theft, bribery, and other illegal activities. One example is that the falsification of documents within the Ministry is the norm, so there are always questions about what it reports about oil production. That leads to oil smuggling, which has been a major business since the 1990s. Oil and refined products are stolen from pipelines, refineries, and storage facilities. Many times this is done in collusion with government workers who provide forged papers to cover up the theft. In 2007, Iraq announced that between 100,000-300,000 barrels of oil a day could not be accounted for. That was largely due to smuggling. Corruption is another major reason why Iraq’s production numbers are in question. Oil Ministry officials often fake numbers to cover up their own involvement in smuggling and other crimes. 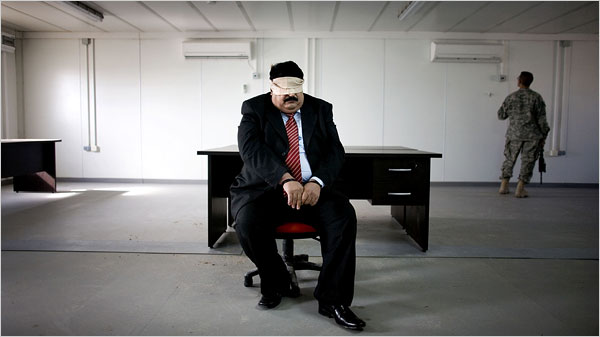 The head of Baiji refinery’s intelligence and internal affairs being arrested in 2008 for corruption and suspected ties to insurgents
Oil is Iraq’s lifeblood. Although the government is supposed to have a monopoly on the industry, there are so many holes in its management that it can never know precisely what is going on. It has no effective measurement devices, oil smuggling is rampant, and the Oil Ministry’s own workers can’t be trusted to keep accurate records. The result is that Iraq is losing billions of dollars a year. There is no sign that this will be solved anytime soon, as no post-Saddam government has been serious about tightening controls over the petroleum business. That’s because many of the political parties benefit from the loose oversight to line their own pockets. Until the country’s elite overcome this issue Iraq will never know how much oil it produces, nor make the profits it should.

AK News, “No substantial change in oil exportation in August,” 7/15/10

Cordesman, Anthony, “Success or Failure? Iraq’s Insurgency and Civil Violence and US Strategy: Developments through June 2007,” Center for Strategic and International Studies, 7/9/07

Another way of looking at this is to say that as the government refuses to privatise the industry, it is privatising itself.

The problem is how do you get it back into legitimate hands?

The industry should be privatized. Let the national oil company continue to pump what's developed already, and let private industry do their thing elsewhere. Then, it's just a matter of requiring annual tax returns. Books can always be audited to see who's cheating.

Texas has 1,000,000 oil wells. Iraq has 200. It's pretty obvious that private operators are a lot more proficient in this area.

It's just politically impossible to do that right now. The Oil Ministry had a hard enough time just getting those joint ventures done.