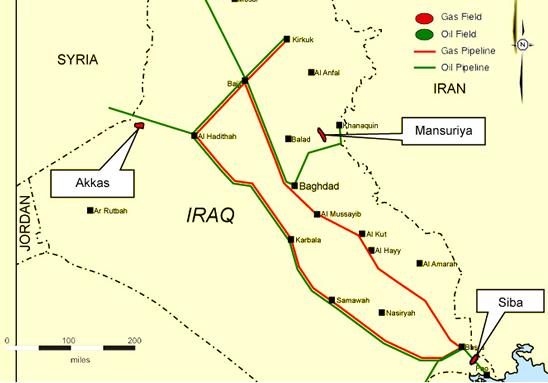 In October 2010 three natural gas fields were auctioned off by Iraq. The inclusion of Akkas in Anbar angered local politicians there (Energy-Pedia News)
On October 20, 2010 Iraq’s Oil Ministry held a successful bidding round for three natural gas fields. One of those was Akkas in Anbar province, which was won by a consortium of South Korea’s KOGAS and Kazakhstan’s KazMunai Gas. That same day provincial officials organized protests over the auction. That has held up the signing of the contract for Akkas.

Anbar’s provincial officials made several complaints about the Akkas field being bid on. First, they said that Akkas should be under local control, and that the companies should hire workers from the province. Second, they want guarantees from the Oil Ministry that any gas produced will be used for local electricity plants, and not be shipped off to Baghdad or exported. Third, the provincial council claimed their concerns were being ignored by the central government. They quoted Article 109 of the constitution, which says that Baghdad will work with the local authorities to develop the country’s natural resources.

Because of these issues the Anbar council rejected the Akkas auction. They said that the companies would not be allowed to work in the governorate, that they would not provide security, threatened a civil revolt and a possible lawsuit against the Oil Ministry. As a result KOGAS and KazMunai Gas refused to sign the deal with the Ministry until Anbar approved it.

The problems between Anbar and Baghdad started earlier in the year. For one, the Oil Ministry refused a proposal to have Turkish and German companies develop Akkas, as well as another offer by a Korean consortium. The central government also turned down a proposal by the UAE’s Crescent Petroleum and Dana Gas to invest $60 billion in the province to set up a gas center there. The Oil Ministry had blacklisted both firms for working in Kurdistan’s oil industry.

The Oil Ministry is trying to work out its differences with Anbar. They said talks would hopefully be concluded by the end of November, and that would allow the Akkas deal to move forward. Until then the foreign consortium is unlikely to sign anything as the threats and complaints by the local politicians have scared them off for now.

You know, for all of the staggering corruption in Iraqi politics, for all of the ongoing violence, for all the skeezy actors in Iraq's political parties, this sort of thing is how a democracy is supposed to work, and I'm really glad to see it. Of course, there is the element of this that's pretty Iraqi, namely the threat to not provide the necessary security guards to any kind of oil work, but on the whole, this is the way a provincial government is supposed to represent its citizens in relation to the national government.

Yes, and the basis of their complaint, the constitution is correct. It does say that the central government will work with the provinces to develop oil and gas, but the Oil Ministry continues to say that only they have the authority to develop natural resources and they don't take any input or really cooperate with anybody else. How this will works out will be interesting, but unfortunately it will probably end with Baghdad just ramming their policy down the throats of the provincial officials.