The third quarter of 2015 saw a big surge in violence by the Islamic State before a large drop off during the winter. Baghdad, Kirkuk, Ninewa, and Salahaddin all saw increases in security incidents, while Anbar witnessed a drop, and Diyala was unchanged.

There were a total of 2,042 security incidents recorded from July to September 2015. That averaged out to 22.1 incidents per day. This burst of violence was almost all due to attacks by the Islamic State rather than fighting during government led operations. After that surge in the summer there was a large dip in the winter. For the last quarter of the year there were 1,796 incidents, averaging out to 19.5. That was due to a large drop in attacks in October and November, before going back up in December and January 2016. 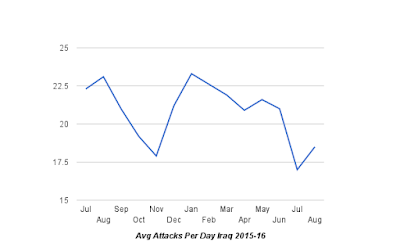 Anbar was the only main battlefront that saw a decline in incidents in the third quarter of 2015. They went from an average of 5.1 per day in July to 4.7 in August to 3.6 in September. The government was busy trying to clear the areas around Fallujah and Ramadi and the towns in between, but the Islamic State didn’t seem to take them seriously otherwise there would have been a large number of counterattacks. The violence was still intense with 57 car bombs and 6 suicide bombers. That meant the province was still one of the deadliest in Iraq. From July to August 1,526 were reported dead, and 1,418 wounded. Government shelling and Iraqi and Coalition air strikes led to 511 fatalities with another 747 injured. The fact that there were more dead than wounded recorded in this period was another sign that the authorities were suppressing casualties. 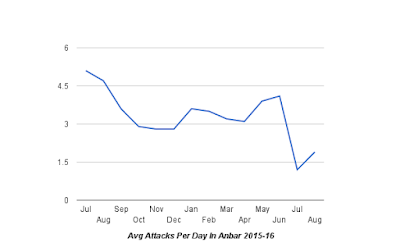 Violence went up and down in Baghdad. There were 9.1 incidents in July, going down to 8.4 in August, only to increase to 9.8 by September. That was a prelude to the huge increase in incidents that would be seen in the 2015-2016 winter when there would be an average of 10-11 incidents per day. That highlighted the shift in emphasis by the Islamic State from conventional fighting to terrorism that would continue into the next year. At the same time, the militants either lost resources or shifted them to other theaters as there were 21 car bombs and 4 suicide bombers in July, going down to 11 in August and 7 in September along with 3 suicide bombers. There would not be 21 car bombs in Baghdad in one month again. 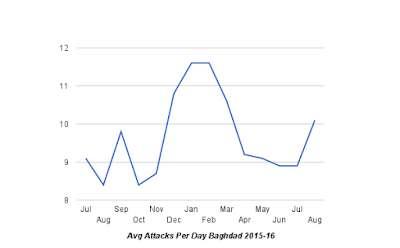 Diyala never really saw as much violence as the rest of the country after the insurgents’ summer 2014 surge. In the 3rd quarter of 2015 there were just around 1 incident per day. Most of those were shootings and IEDs, but the Islamic State was trying mass casualty bombings a couple times a month. In July for example, there were 6 car bombs including one in a market in the middle of the month that caused 285 casualties. That was followed by 5 more car bombs in August, with another in a market leaving 130 dead and wounded. Finally, in September there were 3 vehicle bombs. 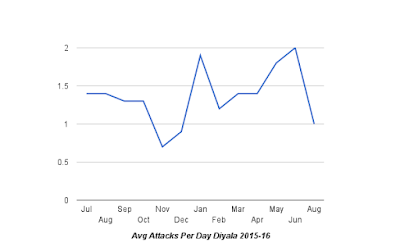 There was a slight surge in activity by the Islamic State in Kirkuk from July to September. Incidents went from 0.6 per day in July to 1.4 in August to 1.0 in September. Violence then fell off in the winter to pick up at the start of 2016. Most of those incidents were skirmishes with the peshmerga. IS was also executing a large number of people in Hawija, which is the last district in the province still under its control. 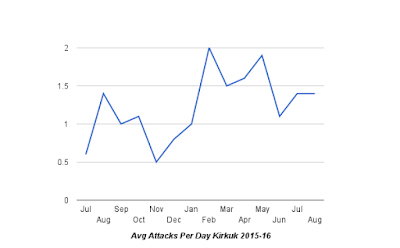 Ninewa was different from the other governorates in Iraq because many of the reported incidents were executions by the Islamic State. It as difficult to ascertain whether all of these actually happened or whether they were propaganda as they mostly came from Kurdish papers connected to the ruling parties. At the same time, residents, people who have fled, and IS’s only propaganda have shown their harsh punishments for breaking their rules. From July to August a total of 1,876 were killed, and 247 wounded. 1,407 of the fatalities were executions. There were also 160 people found in mass graves. Another 204 were reportedly killed in Coalition air strikes, and 167 injured. There were also occasional attacks upon the peshmerga lines. 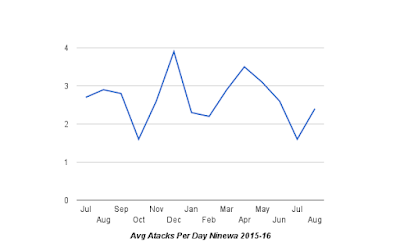 The number of attacks in Salahaddin were pretty much flat from July to September. There were an average of 2.6 per day in July, 2.9 in August, and 2.6 in September. Most of those took place in Baiji and its refinery. During the quarter, the government forces consistently claimed they had almost freed the area, only to launch a brand new operation immediately afterward. Most of the victorious announcements were propaganda by various Hashd groups. For example, in July one of the main Hashd spokesman claimed that 80% of the refinery was freed and then two days later Asaib Ahl Al-Haq said only 40% was cleared. It wouldn’t be until October that the town and facility was finally liberated. After that attacks in the province would steadily decline up to the present day with only a few brief spurts of insurgent activity. 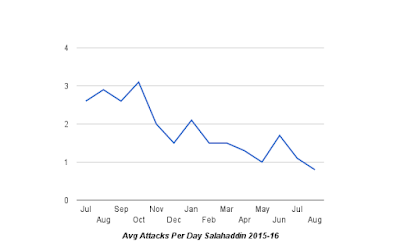 During the quarter two car bombs were dismantled and destroying in Karbala. Otherwise the Islamic State carried out no attacks in all of southern Iraq. What violence that was reported in that region was political, criminal, or tribal in nature.