Violence had been on a decline throughout 2016, even with the Islamic State’s spring offensive, but that was reversed in August. Attacks finally climbed upward driven by a renewed wave of bombings in Baghdad, counter attacks in Ninewa and Kirkuk, and a new wave of executions by the militants to maintain their control over the last remaining areas of their caliphate in Iraq.

There were 574 incidents in August 2016. That was up from 530 the month before. At the same time it was the second lowest amount recorded so far in 2016, but did reverse the decline in attacks seen throughout the year. Increases in violence were seen in Anbar, Baghdad and Ninewa. 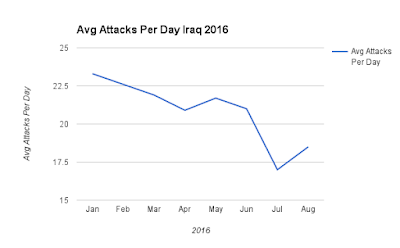 In August, there was heavy fighting in Khalidiya Island between Ramadi and Fallujah in Anbar, while the Islamic State was also attacking in the west around the Syrian border area and Haditha. That led to an almost doubling of security incidents from an average of 1.2 per day in July to 1.9 in August. A total of 138 people ended up dying and 74 more were wounded. Of the deceased, 55 were blamed on a Coalition air strike, and the Islamic State executed another 30. 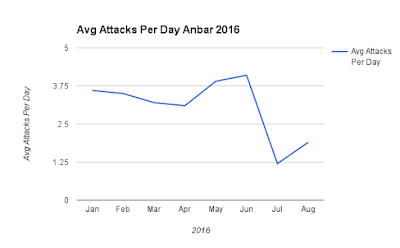 There were just 12 incidents in Babil. Those were a mixture of kidnappings and IEDs. For months now there has been very little insurgent activity in the governorate.

Violence had been going down in the capital province for the last five months, but spiked in August. The number of average attacks per day went from 8.9 in both June and July to 10.1 in August. That killed 387 people and wounded 1,023. Three car bombs and four suicide bombers hit Baghdad costing the lives of 18 people and injuring 55. That was only a small fraction of the total casualties. The 31 sticky bomb and 159 IEDs took a far heavier toll, regularly hitting commercial districts to take the highest human tolls. As IS has been thrown on the defensive, it has turned to striking the capital more and more to undermine the government and to keep it in the headlines. 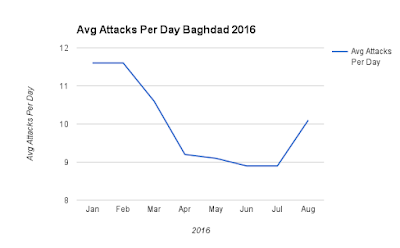 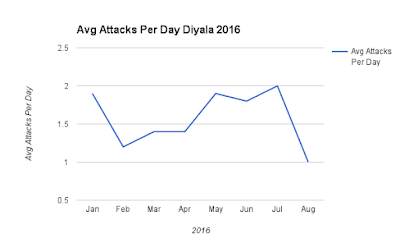 There were two rare terrorist attacks in southern Iraq. A group of suicide bombers were able to infiltrate into Karbala leaving 18 dead and 28 wounded. A car bomb was also intercepted at a checkpoint in Muthanna killing 2 police and injuring another 5.

There was an explosion of deaths in Kirkuk. Advancing government forces has led to an exodus from the Hawija district in the southern section of the governorate. In turn, IS has killed more and more civilians in an attempt to stop the outflow. Of the 318 fatalities in August, 271 were people who were either executed or killed trying to flee the grips of the militants. 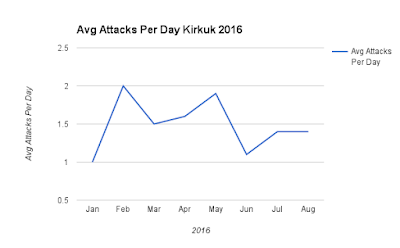 Ninewa saw a jump in violence due to three factors. First, the government continued its push into Qayara leading to counter attacks by IS. Second, there were continued attacks upon the Peshmerga lines. Third, the militants upped their executions to maintain their control over their territory. 162 people were killed by the Islamic State, and another 40 were found in an IS prison and mass graves. Another 54 ISF and 38 Peshmerga died and 15 ISF and 37 Peshmerga were wounded in fighting. That led to a total of 330 deaths and 115 injured for the month. 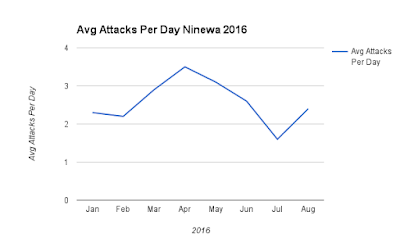 Security incidents continued on their downward trend in Salahaddin. There were just 25 in August with 40 dead and 48 wounded. That was the fewest recorded attacks of the year. 34 of the casualties were displaced people attempting to escape the Islamic State. 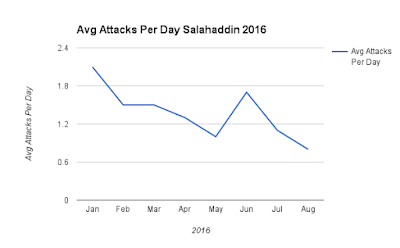 In August there were 10 successful car bombs. None of them caused many casualties as they were either aimed at the security forces or detonated at checkpoints before they could reach civilian areas. The government claimed it destroyed another 97. Those figures are routinely exaggerated as part of the authorities’ propaganda efforts. Broken down by province there were 2 successful car bombs in Anbar, with 12 destroyed. 3 in Baghdad, and 2 truck bombs dismantled. 1 suicide car bomb in Diyala, and 1 dismantled. 1 in Muthanna. 3 suicide car bombs in Ninewa and 70 destroyed, and 12 wiped out in Salahaddin.