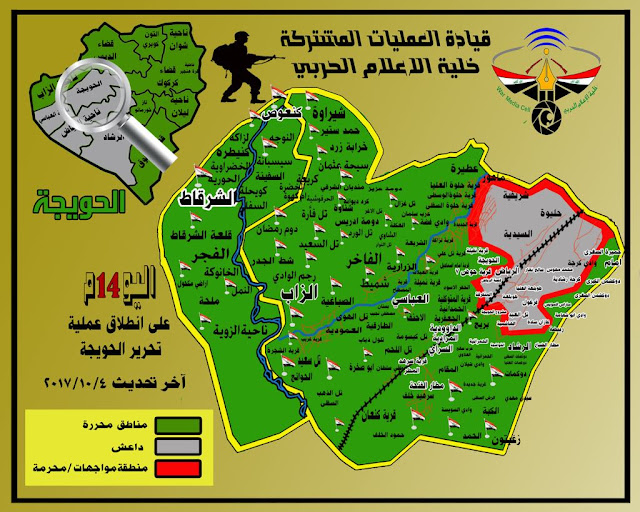 Over the last two days the joint forces have continued their advance and reached the town of Hawija itself. They are also attacking the Riyad sub-district, while continuing to plow through the Hamrin and Makhoul Mountain ranges.


On October 3, the Iraqi forces were pushing through the areas south of Hawija. 35 villages were said to be freed by the Hashd and Golden Division along with new areas of the Hamrin Mountains. Those mountains were said to have been liberated the day before, but fighting continued there. In the town of Abu Sakhra in the Abbasid area to the west of Hawija another mass grave was discovered with victims of the Islamic State. On October 2 two other graves were found.

By October 4, the areas south of Hawija were under government control and the town itself was attacked. The Federal Police entered two districts of Hawija from the northwest and reached the center of the town. At the same time, forces attacked the Riyad sub-district to the south from two directions. Four more villages were taken as well and all of the Makhoul Mountains were said to be under control. Like the Hamrin Mountains, the Makhoul range was supposedly liberated October 1. Two more mass graves were discovered as well with bodies of civilians and members of the security forces killed by the militants. The campaign is now in its final phase. There is only one last section of the district to be assaulted, and Hawija itself will fall likely in a day or two. While this fighting has been going on the operation in western Anbar has been put on hold. That will re-start once Hawija is completed eventually leading to the end of the Islamic State’s control of territory in Iraq. That will be a huge victory for Baghdad after its ignominious defeat in 2014.

Al Maalomah, “The popular crowd announces the liberation of large areas at the top of the Hamrin Mountains south of Hawija,” 10/3/17
- “Security forces liberate four villages and Makhoul Mountains completely,” 10/4/17