Bernard Lewis And The Invasion of Iraq 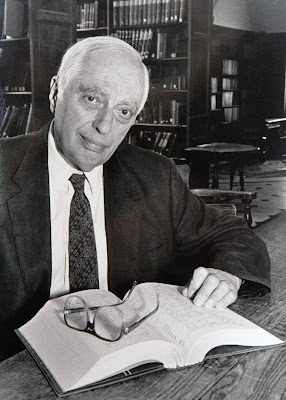 In May 2018, renowned Princeton Professor Bernard Lewis passed away. He was one of the West’s leading scholars on Islam and the Middle East. He also threw in with the neoconservatives, and contributed to the 2003 invasion of Iraq.


As early as the1950s Professor Lewis argued that Islam and the West were diametrically opposed to each other. In 1957, Lewis argued there was a clash between Islam and Judeo-Christianity. In 1990, he would turn that into a clash of civilization, which would be popularized by Samuel Huntington. According to Lewis, the root problem between the two was Islam’s failure to modernize. The conventional wisdom was that western imperialism was the main cause of the problems in the Middle East. Lewis countered that it was the Muslims themselves that had held themselves back, because they were stuck in the past. That was why the region was full of dictatorships, corruption, repression, extremists, and lack of economic development. Lewis went on to say that Muslims hated the west and that was why they turned to anti-Western terrorism. To Lewis the only thing Arabs and Muslims understood was force, and if Washington were to do that it might be able to reshape the region, and bring about democracy and drag the Middle East into the modern world. These ideas were shared with many in the neoconservative movement, which he would be a fellow traveller with in the 1990s.

In February 1998, the Committee for Peace and Security in the Gulf sent a letter to President Clinton calling for the overthrow of Saddam Hussein. The group called for the U.S. to back Ahmed Chalabi and the Iraqi National Congress and launch a revolt in Iraq that was supposed to overthrow the regime. The letter was written by former Congressmen Stephen Solarz and former Pentagon official Richard Perle, and was signed by Bernard Lewis along with the likes of John Bolton, Douglas Feith, Zalmay Khalilzad, Elliot Abrams, Paul Wolfowitz, Donald Rumsfeld all of which would go to work for the Bush administration. Many were also leading neoconservatives. That group had been upset that Saddam survived the 1991 Gulf War. They argued that Washington needed to get rid of his regime, and that could begin the transformation of the Middle East and democratization. Lewis shared many of these views and was the reason why he began associating with the neoconservative movement, and signed the letter.

9/11 confirmed for Lewis that there was a conflict between the west and the Muslim world. He went on TV and said that Muslims didn’t fear or respect the U.S., and that it needed to respond with strong military action to show its power, and that Iraq would be the best place to do that. On September 18, Lewis spoke to the Pentagon’s Defense Policy Board. He said that the U.S. needed to support people like Ahmed Chalabi who he saw as a modernizer. He also repeated his public statements that the U.S. had to respond with force otherwise the Muslim world would see that Americans as weak. In November, Bush’s top adviser Karl Rove asked Lewis to brief the president and National Security Adviser Condoleezza Rice on the Islamic World. That same month, Deputy Secretary of Defense Paul Wolfowitz requested the American Enterprise Institute put together a group to come up with suggestions for what the U.S. was facing after 9/11. Lewis became part of that group. Again, its findings showed the influence of the professor. It concluded that the U.S. was in a two generation struggle with radical Islam and terrorism, and that Iraq could be the place where Washington could take a stand and try to fix the Middle East. The findings were distributed to Rice, Vice President Dick Cheney and the president all of whom liked it. In 2002, Lewis became a dinner partner of Cheney several times where they discussed the Middle East. Lewis told Cheney the U.S. needed to change that dynamic because the Arabs could not do it themselves. The professor found a receptive audience with the White House that was caught completely by surprise by Al Qaeda. It wasn’t satisfied with just eliminating that group’s base in Afghanistan and overthrowing the Taliban. It wanted a much bigger demonstration, and it came to agree with Lewis and the neoconservatives that Iraq was where that could occur.

To Lewis Iraq was not a threat to the United States, but rather it interested him because of the domino effect the overthrow of Saddam Hussein could have upon the region. He and the neoconservatives both proved wrong however. They believed that democracy was a natural desire of humanity, and that it would simply organically spring from the liberated Iraqis. The idea of building institutions, creating rule of law, the development of civil society all of which would involve years of strategizing, the expenditure of billions of dollars, and a long occupation were all rejected. The result was a disastrous war and thousands of Iraqi dead as things did not go as planned. Despite this real world rejection of Lewis’ ideas about Islam, the use of American military might, and changing the Middle East and Iraq the professor maintained his status in the academic world.