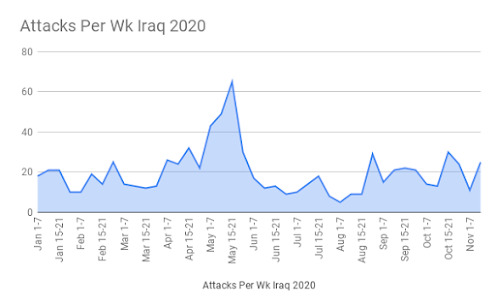 Attacks in Iraq continued to fluctuate up and down. The first week of November there were 11 incidents. That went up to 25 the second week.

That left 23 dead and 39 wounded. 7 Hashd al-Shaabi, 8 civilians and 8 Iraqi Security Forces (ISF) lost their lives while 7 civilians 16 Hashd and 16 ISF were injured. Baghdad had the most casualties with 20, with 16 in Kirkuk and 13 in Diyala.

Two soldiers were shot by a sniper and a checkpoint was attacked both in the Hit district. The Islamic State also kidnapped 4 people in the Rutba district and released three of them. Like the rest of Iraq incidents in Anbar have gone up and down nearly every week. The province is mostly used for smuggling so there are never that many attacks overall.

There was a rare clash between the insurgents and ISF in Baghdad. That occurred in Radwaniya in the south when IS attacked a checkpoint and set up an IED to hit the reinforcements that arrived. It left 11 dead and 8 wounded. This was one of the biggest incidents in the governorate for months. There was also an IED in Shaab in the north. The militants are no longer trying to infiltrate into Baghdad itself but it’s still carrying out a few operations in the periphery of the governorate.

As usual Diyala had the most incidents in Iraq during the week. Most were IEDs, a total of 4, but two checkpoints were attacked. The government also conducted three sweeps but these have had little effect upon security.

In Kirkuk there was one gun battle and a checkpoint was shot at amongst the 5 incidents there during the week. Most of these incidents occurred in the south where IS was never routed during the war, but there was one shooting in Kirkuk city as well.

Two towns were hit by mortars in Ninewa. One was in Tal Keif in the north and one in Hamam al-Alil in the south. Like Anbar there are few incidents here as it is mostly used for smuggling across the Syrian border.

Of the four incidents in Salahaddin there was one gun battle and some fishermen were attacked and one of their boats burned both in Tuz Kharmato. The insurgents have been hitting different parts of the province each week. Sometimes it’s in the south sometimes in the center sometimes in the north, etc. Most of these appear to be coming from Diyala and Kirkuk but IS also looks like it has some camps around Samarra in the center.

Baghdad Post, "A civilian was wounded by a foreign body explosion in Al-Shaab area in Baghdad," 11/8/20

Al Maalomah, "3 policemen were killed and wounded in a roadside bomb explosion in Diyala," 11/13/20

- "Diyala .. Director of the water district of Abu Said survives an assassination attempt," 11/9/20

- "The launch of a military engineering operation in Khailania, northeastern Diyala," 11/12/20

- "A military operation to track down ISIS in the orchards and villages of Al-Abara in Diyala," 11/10/20

- "A number of security elements were killed and wounded in the explosion of an explosive device in Kirkuk," 11/9/20

-"A Security Operation Launched To Secure The Desert Between Karbala And Anbar," 11/9/20

- "A Security Operation To Pursue ISIS Remnants In Naqshbandi Area, Northeast Of Baquba," 11/14/20

- "A Soldier Killed And Another Wounded In An IED's Explosion Northeast Of Baquba," 11/12/20

- "Three policemen were killed and wounded when an explosive device went off northeast of Baqubah," 11/13/20

Shafaaq News, "ISIS attacks fishermen, east of Salahaddin, and the Lion of Amerli is attacked," 11/8/20

Al Sumaria, "An affiliate of the Federal Police was killed while responding to an ISIS attack in Samarra," 11/8/20