Review Under The Black Flag, At The Frontier Of The New Jihad

Moubayed, Sami, Under The Black Flag, At TheFrontier Of The New Jihad, New York: I.B. Tauris, 2015 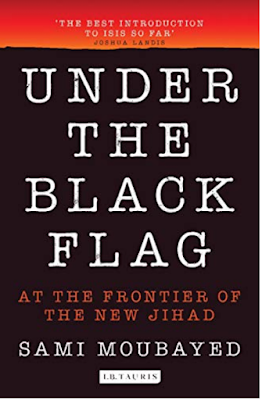 The rise of the Islamic State (IS) in 2014 led to a cottage industry of books on the topic. Under The Black Flag, At The Frontier Of The New Jihad was one of them. Author Sami Moubayed wrote that the purpose of Under The Black Flag was to explore the ideological history of IS. He was a Syrian historian, which shaped his work. That’s seen with the first half of the book being about the Islamic empires, the caliphate and the Islamist movement in Syria even though he admits that the Islamic State had little to do with that country until 2011. When IS is finally discussed in the second half it is full of inaccuracies. The lack of focus and the problems it has with its topic makes Under The Black Flag a book to avoid.


The problems with Under The Black Flag are apparent right from the start. Moubayed’s interest in history and Syria dominates the beginning of the book. He starts with a discussion of the caliph and caliphate and goes through the Islamic empires of the Umayads, the Abbasids, the Mamluks and Ottomans. It also discusses some of the early Islamic thinkers that came to influence today’s jihadists like Ibn Taymiya who argued that Muslims were straying from their religion and called for a return to the basics of the religion via a jihad. Moubayed also discusses the rise of Wahabism in what would become Saudi Arabia. This is meant to be a background to the Islamic State declaring its caliphate in 2014. While it’s interesting to read this Islamic history it’s not really necessary to explain IS’s decision in 2014. More importantly he claims that the roots of IS were in Wahabism. That isn’t quite true. The Islamic State are Salafis which is derived from Wahabism but different. Many people use the terms interchangeably today, but there is a difference. Wahabis follow Mohammed Bin Abdul Wahab while Salafis have a whole range of other influences. Furthermore, Moubayed doesn’t spend any more time going through the modern Salafi thinkers that led up to IS when his stated goal was to explore its ideology.

Moubayed’s next problem is that he spends several chapters on Syria which have nothing to do with the Islamic State. He begins with a short history of Alawites and their place in Syrian society throughout history and how they came to power with Bashar al-Assad. Then there is a discussion of the Syrian Muslim Brotherhood and the Islamist groups and thinkers that arose out of it such as Abu Azzam who organized foreign fighters that went to fight the Soviets in Afghanistan and who had a large influence on Osama bin Laden. After that Syria’s role in foreign fighters going to Iraq after 2003 is discussed, and then Jabhat al-Nusra a group formed by the Islamic State to fight in the Syrian civil war, which eventually broke away. Besides Al-Nusra’s conflict with the IS Moubayed doesn’t relate these sections to his book’s topic. Moubayed even writes later on that IS really wasn’t interested in Syria until 2011. Why include all this history then? Because Moubayed was a Syrian historian and he took advantage of his book deal to write about what his main interest was.

It’s not until half way through the book that the Islamic State is given a serious discussion, but it starts off rather badly. It’s immediately apparent that Moubayed didn’t take the time to do his research on IS’s roots. He claims that Abu Musab al-Zaqawi became an aide to bin Laden in Afghanistan. That bin Laden gave him a magazine to run in that country. That after 9/11 Zarqawi was sent to Iraq to spread Al Qaeda there. Moubayed then tries to emphasize the role of Syrians in Zarqawi’s organization in Iraq. The author then writes that after Zarqawi’s death in 2006 his group came apart and became outlaws acting independently of its leadership. It’s during this low point that IS demanded total loyalty from other Iraqi insurgent groups or they would face death. The author claims this was what led to IS’s near defeat. Moubayed writes this vacuum allowed Abu Bakr al-Baghdadi to become the organization’s new head and he led it to a revival by spreading to Syria in 2011. Nearly everything he writes in this history is so wrong it makes the book almost useless as a guide to the Islamic State. Zarqawi for instance met with bin Laden in Afghanistan and received funding to set up his own camp in that country but he never joined Al Qaeda. He went to Iraq because of the U.S. invasion of Afghanistan and because he wanted to take advantage of the coming U.S conflict with Saddam Hussein not because bin Laden sent here there. Likewise, the description of IS’s decline and rebirth is full of inaccuracies as well. For being a historian Moubayed failed to apply his skills here.

It’s not until the last third of the book that Under The Black Flag finds it legs. That’s when it goes through the basics of the Islamic State after 2014 including its governance, its education system it set up, its funding, the huge draw it had for foreigners, the role of women, and its media organizations. Again, Moubayed tries to emphasize Syria throughout such as covering IS’s running of Raqqa as an example of its attempt to create an Islamic state. The problem of course is that the reader has to go through the first two-thirds of the book which is either off topic or misleading to get to this point.

The declaration of the caliphate by Abu Bakr al-Baghdadi in 2014 led to a huge explosion of books on the topic. Many of them were quickly put together to cash in on the event. You can put Under The Black Flag in that category. Moubayed never accomplished his stated goal of explaining the Islamic State’ ideology. What he really did was write half a book on Islam and Syria because that was his field of expertise, and then muddled through the other half about the Islamic State. He gets so much wrong about the origins of IS it’s not worthwhile to even read that part.