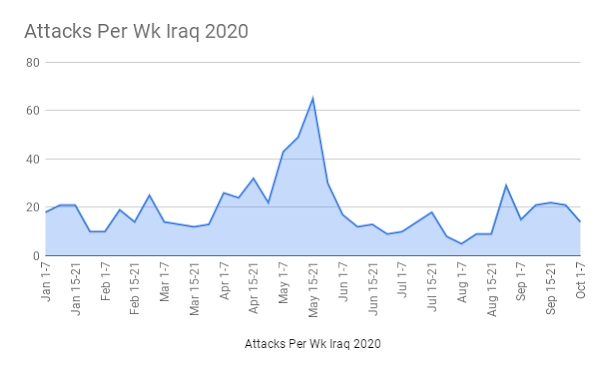 Violence was slightly down in Iraq the first week of October 2020. The Islamic State stepped back from attacks a bit although they were still higher than the previous period from the end of July to the middle of August. Pro-Iran groups also started off with a slew of attacks but then stopped. It’s impossible to say if this week’s events were the sign of a new trend or just a temporary dip. Only the following weeks will tell.

There were a total of 19 security incidents reported in Iraq from October 1-7. That was down from 28 the last full week of September, 32 the week before that, 27 the 2nd week of September and the same amount as the first. Attacks picked up at the end of August as it appeared that the Islamic State was launching a Fall offensive and pro-Iran elements were trying to humiliate Prime Minister Mustafa al-Kazemi after he visited President Trump in Washington D.C. It’s too early to tell whether those two campaigns are over or not.

Hashd groups linked with Tehran launched 5 attacks during the week. That included an RPG fired at a convoy in Babil, 2 rocket attacks upon Baghdad’s airport and Green Zone with the latter falling short upon the Jadriya neighborhood, and IEDs on convoys carrying supplies to the Americans in Dhi Qar and Diwaniya. All of these happened on just two days October 1 and October 5. After that however, there were no more incidents. Middle East Eye reported that PM Kazemi asked Iran for a 40 day ceasefire over fears that the United States would close its embassy and conduct a number of attacks upon Iraq. That might account for the respite. Again, only time will tell if this is a lasting change or not.

A total of 9 people were killed and 12 wounded from October 1-7. That included 4 Iraqi Security Forces (ISF) and 5 civilians that lost their lives and 1 Hashd al-Shaabi, 4 ISF and 7 civilians that were injured. This was the second week in a row that the security forces did not make up the majority of casualties which has been the case in most weeks since the spring when IS announced a war of attrition against them.

In Anbar there was a rare motorcycle bomb in Fallujah that left 5 wounded. There is very little violence in the province except during IS’s offensives so even while incidents were down a bombing like this pointed that the group was still attempting more elaborate attacks.

Besides the two rocket attacks two suicide bombers were arrested in northern Baghdad province. The government claimed that they were going to target pilgrims during the Arbaeen ceremonies another sign of a possible IS campaign this fall.

Diyala saw the most incidents in the country as usual. Out of the 6 incidents there was an attack upon a checkpoint and three villages were hit with mortar fire, two in the Khanaqin district in the northeast and one in the Abarra sub-district in the center. The mortar fire was either meant to intimidate locals and drive them out or warn them to pay up the various taxes the Islamic State charges. This is part of the insurgent’s strategy to dominate the rural areas of Diyala to create safe havens and raise funds.

There were four incidents in Kirkuk including a home invasion that ended with three family members killed and a gun battle with the police that left four officers dead and three wounded that included mortar fire. Again these were more examples of IS’s rural tactics.

There were only one incident each in Ninewa and Salahaddin. In the former there was a shooting in the east that left one person dead while in the later a suicide bomber was killed during a raid in Thar Thar in the southwest. Attacks have consistently gone up and down in these two governorates. Ninewa is usually quiet because it is mostly used for smuggling and logistics by the insurgency.

- "IS Rocket Attack Wounds Three Civilians in Village near Khanaqin," 10/6/20

- "The crowd announces the killing of a suicide bomber and the destruction of a guesthouse and three tunnels between Salahaddin and Mosul," 10/1/20

- "A fighter in the Popular Mobilization Forces was wounded by an ISIS sniper fire in northeastern Diyala," 10/1/20

NINA, "An agricultural village in Jalawla was subjected to a mortar attack," 10/5/20

- "A civilian was killed when an explosive device exploded northwest of Kirkuk," 10/2/20

- "The Green Zone And The Vicinity Of Baghdad Airport Hit By Katyusha Rockets," 10/5/20

Sotaliraq, "Al-Kazemi spokesman announces the foiling of an attempt to target the Arbaeen visitors in Baghdad," 10/3/20