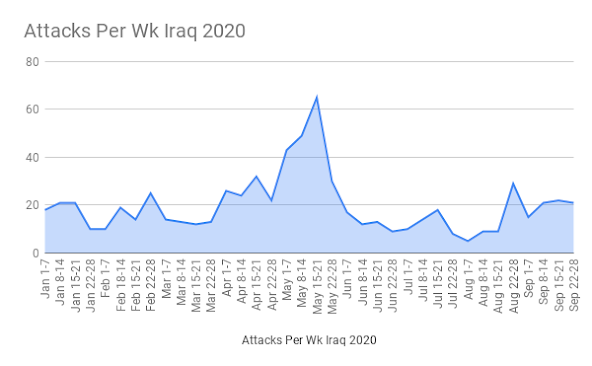 Islamic State attacks in Iraq have leveled off in September, but they are still higher than the previous two months. Pro-Iran groups have also picked up their operations this month.

There were a total of 28 security incidents reported in Iraq from September 22-28. 7 of those were by pro-Iran groups. Convoys carrying supplies to the Americans were struck by IEDs in Baghdad, Dhi Qar, Salahaddin, and twice in Babil. There was also a mortar attack upon Baghdad’s Green Zone and a rocket fell short of the Baghdad airport and landed in the Radwaniya area killing five and leaving two wounded. These casualties finally brought public outrage in the country. Before that one truck driver was killed and eight more were wounded in September with no real remarks by politicians or the public. In total there have been 28 attacks by these groups from September 1-28 versus 24 for all of August, 12 in July and 8 in June when this latest wave of incidents began.

19 were killed and 11 wounded during the week. That was made up of 1 member of the Iraqi Security Forces (ISF), 4 Hashd al-Shaabi and 14 civilians that lost their lives and 1 ISF and 10 civilians that were injured. Diyala had the most casualties with 13. This was one of the rare weeks when members of the security forces which IS has been targeting in a war of attrition did not make up the majority of the dead and wounded.

In Anbar’s Rutba a car bomb blew up on a group of IS members who were assembling it. Vehicle bombs are extremely rare in Iraq these days. This was a sign that insurgents might be starting a fall offensive.

Besides the two incidents by pro-Iran groups a man was gunned down in Hilla, Babil. IS usually solely operates in the Jurf al-Sakhr district, but when it ventures out it usually hits nearby Hilla.

Diyala had the most violence as usual. All of the incidents were low level shootings and IEDs except for an attack upon a checkpoint in the Muqdadiya district in the center. Most attacks usually occur there and in the Khanaqin district in the northeast. The last two weeks however IS has been hitting targets in the west with two in the Khalis area along the Baghdad border this week and three in Edheim sub-district by Salahaddin last week.

In the southern district of Makhmour in Irbil province an IED killed a Hashd member. There are only incidents in this area when the insurgency has picked up the pace of its operations.

There were 3 attacks in Kirkuk including a village being hit by mortars, an assault upon a town with 2 Hashd members being kidnapped and killed, and an Agricultural Ministry worker being abducted and executed. These were the first kidnappings since June and again pointed to a possible insurgent offensive kicking off.

Salahaddin provided more examples of a possible fall offensive. An IED hit a parliamentarian’s convoy in Shirqat killing his nephew and wounding his son. Then two homes were attacked and blown up in the Yathrib district, while there was a shootout in the Samarra area.

AIN, "The son of a deputy was wounded and his nephew was martyred in an explosion targeting him north of Salahaddin," 9/27/20

Bas News, "Iraqi Forces Launch Fresh Operation against IS in North of Baghdad," 9/24/20

Iraq Newspaper, "ISIS terrorists kill a member of the Badr Corps Muhammad Khudair, affiliated with the 23rd Brigade in Diyala," 9/24/20

- "The killing of Iskandar Mahmoud Salah from the crowd and the burning of his car when a bomb exploded near the village of Lakja, south Makhmour," 9/22/20

Al Maalomah, "The crowd thwarted an infiltration attempt by ISIS south of Mosul," 9/24/20

- "Executing a preemptive operation north of Babil, before the launch of the Arbaeen Plan," 9/22/20

- "Falah was killed when an explosive device exploded in eastern Diyala," 9/25/20

- "The popular crowd begins a raid and search operation in western Mosul," 9/23/20

- "The Popular Mobilization Forces and the security forces begin a raid and search operation in East Amerli," 9/24/20

Al Mada, "ISIS is bypassing military homes as the campaign to pursue its militants enters its third week," 9/27/20

- "A Civilian assassinated by unidentified gunmen fire in Diyala," 9/22/20

- "A Convoy Of Logistical Support For The Int'l Coalition Targeted By An IED, Near Babylon," 9/27/20

- "A Govt Employee Killed And His Son Wounded In An Armed Attack North Of Baqubah," 9/28/20

- "ISIS Attacks A Village In Kirkuk, Killing And Kidnapping Two Members Of The Security Services," 9/25/20

- "ISIS Kidnap And Kill An Employee In Kirkuk Department of Agriculture," 9/26/20

-  "A joint pre-emptive security operation in the desert to secure the forty visit," 9/25/20

- "Al-Kadhimi directs to arrest the security force and open an immediate investigation into the Al-Radwaniyah incident," 9/28/20

- "Mortar Shells Land At The Outskirts Of Alton Kubri District In Kirkuk," 9/23/20

- "Three people from the same family were killed and wounded when an explosive device went off northeast of Baqubah," 9/25/20

Shafaaq News, "ISIS blows up the homes of the family of a high-ranking Iraqi border guard officer," 9/28/20

- "two wounded in an explosion and the arrest of an ISIS leader in two governorates," 9/26/20

Al Sumaria, "An explosion targets a logistical support convoy for the International Coalition in Salahaddin," 9/23/20