Oil Prices Collapse And Iraq Has No Answers 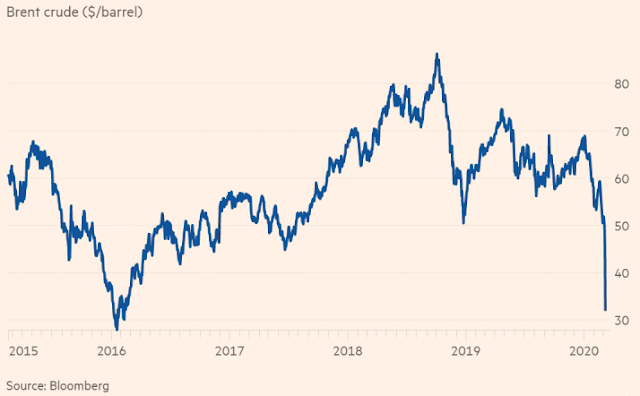 Oil prices have collapsed due to a dispute between Russia and Saudi Arabia and the drop in demand due to the coronavirus. That will devastate Iraq which is the most oil dependent country in the world. Around 90% of its revenue comes from its petroleum sales. This couldn’t come at a worse time as the government is paralyzed because it has been unable to pick a new prime minister. Even if that wasn’t happening Baghdad has never planned for the ups and downs in the energy market increasing its budget every year prices stay high and then falling into debt and deficits when they collapse. The value of petroleum is so low however that it threatens the very state itself.

Low oil prices are threatening the government’s ability to operate. In mid-March Brent oil price hit $26 per barrel, the lowest since 2003. Iraq’s draft 2020 budget was based upon $56 per barrel. At current prices Iraq will struggle to make $2.5 billion per month. An Iraqi economist said that Iraq needs $75 billion a year just to cover its salaries, pensions and social services, which averages out to just over $6 billion per month. Analysts expect the energy market to be depressed for anywhere from six months to a year. Iraq has not helped itself by dramatically increasing salaries for government workers since the end of the war against the Islamic State. Salaries jumped from $36 billion in 2019 to $47 billion in 2020 after the government added 500,000 new public employees to meet the demands of the protests. The draft 2020 budget was supposed to add thousands more. The state employs around 4 million workers plus another 3 million people have pensions. The ruling parties rely upon public employees in their patronage networks to maintain their support. That’s the reason why nearly every year more jobs are added to the budget. Without the state being able to cover these costs the elite’s position will be severely threatened.

The changes to the international energy market threatens its oil industry as well. The government signed Technical Service Contracts with foreign companies meaning companies get a flat fee per barrel they produce no matter what prices are. Now Baghdad may have to default on paying the oil corporations like it did from 2014-15 when the war vs the Islamic State broke out. Iraq was able to work its way around that crisis because it was caught in an armed conflict. This time the problem arises from a lack of strategy and planning by the authorities meaning the foreign businesses may not be so forgiving. They may respond by drastically cutting production depending upon how long this situation lasts, which means Iraq could be earning much less exaggerating its budget problems.

So far Iraq’s authorities do not appear to be taking this dilemma seriously. Retired Premier Abdul Mahdi held a meeting of the Finance, Oil, and Planning ministries along with the governor of the Central Bank and others at the start of March and ordered them to take action to deal with the financial crisis, but no details were given. Other officials have talked about halting projects and borrowing to deal with the expected budget deficit. Ali Allaq the head of the Central Bank didn’t seem to think things were that bad. He didn’t expect oil prices to stay low for long and said that the government could cut subsidies and services to cover the debt and salaries. Parliamentarian Nada Shaker Jawadat from the economy committee told Iraq Oil Report that at times like these the government needed professionals in the ministries but they don’t have them. Another senior official told the Report no one was actually planning to deal with these problems. That’s shown by people by Allaq who didn’t think the crisis would last or the idea that ending development projects would provide enough money to cover other costs like salaries. Iraq barely spends any funds on that type of spending.

Iraq’s stated policy decisions so far are another example of unpreparedness. Baghdad said it would cut oil prices and increase its exports to boost sales. With the coronavirus world demand for petroleum is way down so there is no way it could boost its sales to earn enough to cover its basic costs. Cutting its crude prices are just as unrealistic with prices plummeting.

Finally, Iraq is in a poor position to borrow money as well. Iraq doesn’t have a good relationship with the Trump administration because it has been unable to stop pro-Iran Hashd groups from attacking camps that house American forces. It can’t go to Washington for aid or help with financial institutions. During the war Baghdad also borrowed from the International Monetary Fund by promising to carry out financial reforms. When the war ended it ignored that agreement. That doesn’t mean all avenues are closed for it, but it is unlikely to be able to get the amount of money it wants given its tremendous needs.

Iraq’s elite have never taken the country’s oil dependency as an issue. Instead it has looked towards its petroleum wealth as a way to maintain its position and enrich itself. Now that the world economy is facing a recession and oil prices have sunken so low they are starring into the abyss. The government is completely unqualified for the possible repercussions. It will have to implement drastic austerity measures which will cut into the ruling parties’ patronage systems making it reluctant to do so. It will not be able to borrow that much, which means it will likely have to raid its foreign reserves to pay for things, and carry out massive deficit spending. Iraq has suffered oil declines before, and its main response is simply to wait them out and then go back to business as usual. This time maybe different because the energy market has gone down so low the state may not be able to sustain itself which could lead to a new round of protests and more unforeseen consequences.

Al Mada, “Falling oil demand puts the salaries of 4 million employees at stake,” 3/8/20
- “Parliamentary committees blame the government and others talk about salaries for the dissolved 550,000,” 3/11/20

Al Masalah, “Economist: It is difficult to cover the operating budget expenditures of $75 billion annually,” 3/20/20