Review The ISIS Apocalypse, The History, Strategy, and Doomsday Vision of The Islamic State 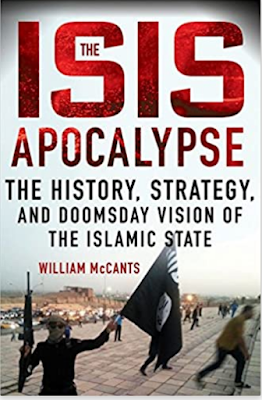 The declaration of the caliphate in 2014 by the Islamic State created a cottage industry in western books on the group. With time having passed and more knowledge on the Islamic State available these releases can now be evaluated better. The ISIS Apocalypse, The History, Strategy, and Doomsday Vision of The Islamic State by William McCants published in 2015 is one such case. The author had three main points. One was that he tried to explain the differences between Al Qaeda and the Islamic State (IS). Two he claimed that Al Qaeda in Iraq failed under its first two leaders, but then succeeded under Abu Bakr al-Baghdadi even though they followed the same strategy. Finally, he makes a flimsy case that IS was an apocalyptic group. Overall, McCants got more things wrong than right about the Islamic State.


The ISIS Apocalypse begins by outlining the differences between the two premier jihadist groups Al Qaeda and the Islamic State. McCants writes that both wanted a caliphate but disagreed about how to achieve it. For one, Al Qaeda believed that Al Qaeda in Iraq (AQI) needed to build up popular support amongst Muslims first, and the second was that attacking Iraq’s Shiites was defeating that purpose. Later in the book McCants complicates his own argument by saying that the caliphate actually wasn’t that important to Al Qaeda’s leadership of bin Laden and Zawahiri. Then he writes that Al Qaeda were also concerned about AQI’s indiscriminate attacks upon Iraqi civilians and other insurgent groups. These were far more important to Al Qaeda’s leadership, but McCants emphasizes the split over Shiites. In the end he does note that the Islamic State’s approach won out as it received followers from around the world in 2014 despite its ultra-violence.

Next McCants believes that Abu Musab al-Zarqawi and his successor Abu Omar al-Baghdadi failed as leaders of the Islamic State while Abu Omar al-Baghdadi succeeded. For example he claims that attacking Shiites distracted Zarqawi from his goal of forming a caliphate. He also wrote that Abu Ayub al-Masri was the real leader of AQI after Zarqawi and later found an obscure former policeman to fill the role of Baghdadi. In his eyes it wasn’t until Abu Bakr al-Baghdadi that everything came together because the situation in Iraq had changed with the withdrawal of the Americans and tribes turning on the government. This argument is wrong for several reasons. First, attacking Shiites was part of Zarqawi’s overall plan to start a sectarian war, force Iraq’s Sunnis to support him, and thus allow for the eventual declaration of a caliphate. Second, Abu Omar al-Baghdadi was always the head of AQI with Masri being his war minister. McCants over relies upon the Islamic State’s former head judge who split with the group. He was a member for less than year, never met Abu Omar al-Baghdadi and claimed he wasn’t even a real person. He also exaggerated all the problems with IS to make his case. Third, the author didn’t mention how IS recovered from its defeat after the Surge and helped change the situation on the ground to allow for its comeback under Abu Bakr al-Baghdadi.

The main fault with The ISIS Apocalypse is its claim that the Islamic State wanted the End Times to come. It quotes things like the announcement of its black flag in 2007 that mentioned the Mahdi that would return with Judgement Day. He uses the ex-judge’s claims that Abu Ayub al-Masri made bad choices because he expected the world to end soon. Third, IS used prophecies as a recruiting tool to bring in foreign fighters. Last, McCants emphasized the capture of Dabiq, Syria where IS believed the Judgement Day was supposed to happen. The problems with using the ex-judge as a source have already been mentioned. On Dabiq, McCants quotes mostly IS supporters about the city's importance rather than IS itself. He also writes that the declaration of the caliphate in 2014 was far more important to garner support than talking about the End Days.

That’s not to say that everything in the book is wrong. McCants for instance, does a good job explaining the split between IS and the Al Nusra Front in Syria and how that led to the falling out between IS and Al Qaeda. He also explains how the declaration of the caliphate in 2014 divided the international jihadist movement with many thinkers like Abu Mohammed Maqdisi who was Zarqawi’s early spiritual leader believed it was too soon.

It’s because we know so much more about the Islamic State today that we can give a thorough assessment of The ISIS Apocalypse now compared to when it originally came out. The book doesn’t fare well under that light. The lack of good sources on IS, getting its leadership and its role wrong, and claiming that it wanted the apocalypse were all major short comings. The insights that are to be gained are therefore overshadowing by the faults.