Review Religion and Nationalism in Iraq, A Comparative Perspective 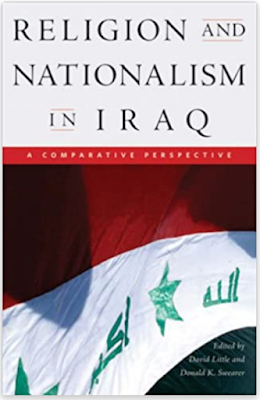 Religion and Nationalism in Iraq, A Comparative Perspective was the result of a 2005 conference held at the Harvard Divinity School’s Center for the Study of World Religion. It brought together a series of historians and academics who presented papers on Iraq, Sudan, Sri Lanka and Bosnia and Herzegovina. The idea was to highlight the ethnosectarian conflicts in each country and try to find any similarities. Ironically at the end they found there were far more different which questioned whether the entire exercise was worthwhile.


The book lays out four main themes all four countries shared in common, but they come apart when each nation is detailed. The first was ehtnosectarian groups fighting for control of power and resources. The second was the role of history namely Ottoman and British imperialism. The third was the problem of self-government, and finally foreign influence. While this first part tries to explain why these four countries were chosen even then the comparisons appear to be a stretch. The Ottoman and British period in Sudan was said to have led to divisions between Arabs and Africans and the north and south. In Sri Lanka, the Buddhists claimed the English privileged the Tamils during the colonial era. During the British Mandate in Iraq the Sunnis were placed in power despite them being a minority. Bosnia-Herzegovina however didn’t see problems until the 1980s-90s when Slobodan Milosevic’s attempt to maintain Communism collapsed and groups began forming along ethnic and religious lines. The conflict in the former Yugoslavia therefore was of much more recent origin than the other three. In fact, in the next section where the different papers were presented and the conclusion showed that there were far more differences between the countries than similarities. There’s a chapter on Islamization in Sudan that didn’t happen in Iraq. In Bosnia and Herzegovina religious leaders claimed leadership of communities when Yugoslavia broke up and pushed chauvinism and militancy. In Iraq, Moqtada al-Sadr was a major player in the sectarian war, but there was also Ayatollah Ali al-Sistani who had a much greater standing and spoke out against the violence. The organizers of the conference at Harvard thought they’d found four countries that were immersed in religious and ethnic conflicts and that therefore they would be related. When they finished they admitted that Iraq, Sri Lanka, Sudan and Bosnia-Herzegovina each had their own unique experiences.

In 2005 very few people in the West understood Iraq. Harvard held a meeting trying to find greater understanding about the Iraq war, but by its own admission failed to explain the country by looking at others. While the effort was commendable it might have been better off to have spent their time and money going into more depth about Iraq itself, which is still widely misunderstood by many Americans.