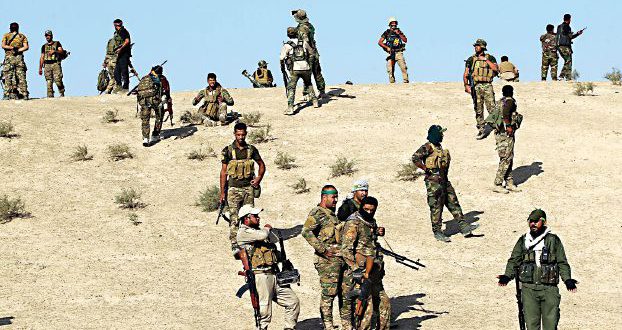 Violence in Iraq remained at a very low level during the second week of July. Incidents were in their teens again for the sixth straight week. The end of the Islamic State’s spring offensive along with an aggressive series of sweeps by the Iraqi forces through core insurgent areas contributed to the current security situation.


There were 16 incidents reported in the media in Iraq from July 8-14. Two of those were by pro-Iran groups. Rockets were discovered aimed at Camp Taji in Baghdad and an armed group claimed it burned trucks in Muthanna used to ferry supplies to the Americans. That left 14 attacks by the Islamic State spread across Anbar (1 incident), Baghdad (1), Salahaddin (1), Babil (2), Kirkuk (3), and Diyala (6). 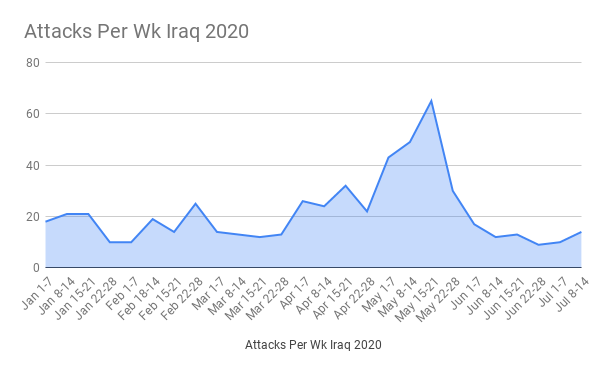 There were 15 deaths and 15 wounded. 7 Iraqi Security Forces (ISF) and 8 Hashd al-Shaabi were killed and 3 civilians, 3 ISF and 9 Hashd were injured. Since spring the insurgents have been targeting the security forces rather than civilians. This week was no different with 27 of the 30 casualties coming from the police, army and Hashd. It appears IS is attempting assert military control over the rural areas it operates within.

In the Hit district of central Anbar two tribal Hashd were killed in an attack. Incidents are rare in the province as it is mostly used for logistics by IS. The government had a sweep through the Ramadi desert as well in an attempt to break up those activities.

There were two incidents in Babil. An IED hit a checkpoint in the Jurf al-Sakhr district in the northeast and the local displacement director in Hillah in the north had his house shot up. Jurf al-Sakhr is a large Kataib Hezbollah base and a common target of IS in Babil. This was the second week there was an attack in Hillah the provincial capital.

Besides the rocket incident a sweep through the Abu Ghraib district in western Baghdad found an arms cache with five Islamic State members. One blew himself up killing two soldiers. Most incidents in the capital for the last two months have been conducted by pro-Iran groups rather than the Islamic State. Hashd units linked to Iran re-started their rocket barrages as Iraq began talks with the United States over a new security agreement which Tehran objects to.

Diyala once again had the most incidents in the country with 6. Five of those were IEDs, while a town in the south was hit by mortar fire. The government launched four more operations in the province. One was along the Iranian border, another in the Muqdadiya district in the center, one in the north along the Salahaddin border, and the fourth in Khanaqin district in the northeast.

Kirkuk saw two shootings and a possible crop burning. A checkpoint was shot at in Dibs, a policeman was killed, and a field was set on fire in the Daquq district. The last incident was not blamed upon the Islamic State but very well could be as it fits their modus operandi during the summer. There was a sweep through Dibs district as well to secure oil installations in the sub-district.

There were no attacks in Ninewa but the government’s forces went through the southwest desert area. Like Anbar, IS mostly uses the provinces to bring in men and material in from Syria. The sweeps are meant to find weapons caches and camps.

A checkpoint was attacked in the Balad district of Salahaddin leaving 1 policeman dead and 1 wounded. There were also two operations by the security forces in the south along the Anbar and Diyala borders.

Al Maalomah "A fighter in the Popular Mobilization killed by a bomb inside a booby-trapped house, north of Muqdadiya," 7/12/20
- "Insurgents burn 3 vehicles shipping for American forces in Al-Muthanna on the international highway," 7/11/20
- "A security operation to pursue ISIS was launched in the Anbar desert," 7/12/20
- "Two employees of the tribal crowd were martyred in an armed attack in western Anbar," 7/11/20

News Of Iraq, "Two civilians were injured and material damage was reported due to mortar shelling in Abu Khamis village, south Diyala," Twitter, 7/12/20

NINA, "/10/ members of the popular crowd and Anti-terrorism were killed and wounded by the explosion of two explosive devices in Diyala," 7/11/20
- "Armed men shoot at the house of the Director of the Department of Displacement and Migration in Babylon," 7/14/20
- "Clearing Hawi Al-Edhaim villages and raising two explosive devices in northern Diyala," 7/11/20
- "Four fighters from the popular crowd were killed and wounded in an explosive device explosion in Diyala," 7/12/20
- "Four hideouts of ISIS and 3 explosive devices destroyed within the borders of Diyala and Salah Al-Din provinces," 7/11/20
- "Al-Jazeera Operations Command carries out a search and inspection operation southwest of the Houran Valley," 7/4/20
- "A Member Of PMF Injured In An IED's Explosion In Jurf Al-Nasr In Babylon," 7/10/20
- "A Missile Prepared To Be Launched Towards The Green Zone, Found And Dismantled East Of Baghdad," 7/10/20
- "The PMF Exposed To ISIS Attack, Northwest Of Kirkuk," 7/11/20
- "A Policeman Shot Dead South Of Kirkuk," 7/12/20
- "The security forces in Diyala started a massive operation on the outskirts of Al-Abbara and Abu Saida districts," 7/11/20
- "A Security Operation To Eliminate ISIS Pockets In Khanaqin Countryside, Diyala," 7/14/20
- "A Security Operation was launched to secure oil installations near Al-Debs district in Kirkuk," 7/11/20
- "Tunnels, caches, and explosives devices to ISIS found in the Nineveh desert and Tharthar in Salah al-Din," 7/8/20