Review Iraq and the Crimes of Aggressive War, The Legal Cynicism of Criminal Militarism 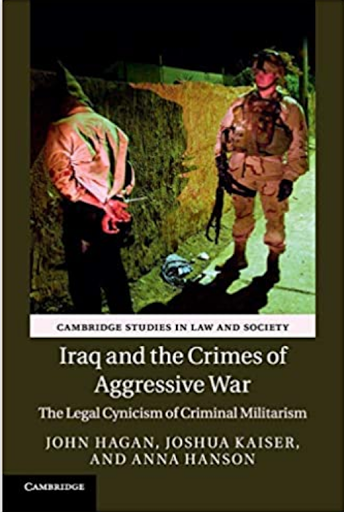 One of the great faults of the Social Sciences is the belief that it can be like actual sciences and use math, equations, charts and graphs to explain human behavior. For some in the field you can’t just explain events and analyze them, you have to quantify them. That’s the problem with Iraq and the Crimes of Aggressive War, The Legal Cynicism of Criminal Militarism. The authors set out to prove that the U.S. invasion of Iraq in 2003 was an illegal war, which created cynicism amongst Iraqis that undermined the occupation and the new Iraqi government. It uses interviews and public opinion polls to try to prove its point but gets lost in its own arguments and half the time doesn’t prove its points.

Each chapter in the book follows the same basic pattern. They start with an explanation of a given situation in Iraq. Lay out some theories to try to explain those events. Then creates models, fits data into them, and tries to prove their hypotheses.

The start of Iraq and the Crimes of Aggressive War isn’t bad. It begins with a rebuttal of the case for war and the occupation of Iraq. The authors go over the crimes of Saddam Hussein from the gassing of Halabja during the Iran-Iraq War to the abuse, torture and rapes of opponents. If that was used to justify the 2003 invasion it would have been a humanitarian intervention and legal. Instead, the U.S. focused upon weapons of mass destruction. That created a sense of cynicism about the war as U.N. inspectors never found any WMD before the war, and it turns out they were right. That meant Iraq was not a threat to America and therefore was an illegal intervention. That’s a sound argument as many today would say that the war was a bad decision and that the justification for it were completely wrong. It’s the following chapters that are the real problem.

For instance, there’s a chapter hypothesizing that Iraqi judges would be lenient on American forces torturing Iraqi prisoners because the Bush administration allowed enhanced interrogation. The authors interviewed 70 judges. It turns out that some of them were lenient with U.S. troops and others weren’t so the hypothesis was proven wrong. More importantly the whole argument like most of the book was that the U.S. was the overwhelming influence upon Iraqi actions. There’s one sentence in the chapter that notes that all the judges were from Saddam’s era where torture was accepted. It doesn’t mention that the Iraqi government although legally outlawing abuse fully believed in it as well. Couldn’t this history of Iraqi practices shape the judges’ decisions? That wouldn’t fit into the book’s argument about U.S. responsibility however.

The following chapters are even worse. There’s one that postulates that the U.S. committed war crimes against Sunnis that led them to approve of the insurgency, and that transferred to fighting the Iraqi government after the 2011 American withdrawal, and could explain the rise of the Islamic State in 2014. It starts off with the wrong foot talking about how the Awakening and Sahwa weren’t effective and persecuted by the Iraqi government that led to a revival of the insurgency. It’s never explained how that fits into the thesis however. It then shifts to how the U.S. attacked civilians that made Sunnis cynical about the occupation and back the insurgency. It uses a survey that runs into problems because while most respondents didn’t approve of the U.S. it didn’t have such bad feelings about the Iraqi government. This undermined the point that Iraqis thought it okay to attack the government because it was okay to attack the Americans. It then claims that the U.S. was responsible for the abuses of the Iraqi security forces because it didn’t stop it. Then it turns to the Maliki government and his turn towards an autocrat that alienated Sunnis. That raises the question of whether it was Prime Minister Maliki’s policies that might have led to the revival of the insurgency and the Islamic State in 2014 rather than the problems with the U.S. occupation. This doesn’t even mention the theories that are thrown in such as one based upon attitudes towards police in the U.S. that the authors believe could explain the negative views Sunnis had about the American military nor the charts and graphs trotted out. This encapsulates most things that are wrong with this book. The arguments are long winded, meandering, maddening, and don’t even prove their points most times. Again, with all the emphasis upon the U.S. role it can’t account for Iraqi agency, which causes havoc with its models.

Iraq and the Crimes of Aggressive War, The Legal Cynicism of Criminal Militarism might have been a good book if the authors didn’t trip all over themselves with theories and models. Too many times the writing becomes about explaining their hypothesis rather than Iraq. Worse yet, the book fails to prove its theses over and over. If had been able to make a coherent argument instead of wandering from topic to topic too many times it might have been forgiven for the academic writing. Unfortunately it turns into a frustrating read.