Review ISIS Inside The Army of Terror, Revised & Updated 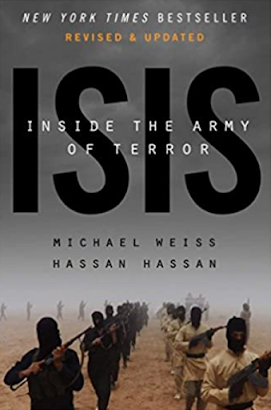 Of all the early books on the Islamic State ISIS Inside The Army of Terror might be the best one. It covers the rise, fall, and then rise again of the group in Iraq, its expansion into Syria, and then overseas. It deals with why people were drawn to IS, its governance, financing, ideology, indoctrination, and its foreign terrorist attacks. It still has some faults, but overall, it sticks to the Islamic State unlike other releases which highlights authors Weiss and Hassan’s research.

ISIS Inside The Army of Terror is mostly a chronological history of the Islamic state with occasional flashes forward to make comparisons between the past and present. It starts off with Abu Musab al-Zarqawi who started the group just before the 2003 invasion of Iraq. Although Zarqawi was a Jordanian he found Iraqis who were willing to follow him due to Saddam Hussein’s Faith Campaign in the 1990s which allowed for the growth of Salafism in the country, and Sunni resentment over the loss of their power in the new Iraq. That brings up the role of Baathists in the organization which was a hot topic amongst researchers in the 2010s. Weiss and Hassan note that there were a number of former regime members in the top echelons in the group and asks whether Abu Bakr al-Baghdadi’s rise to the top of the group was due to his ties to Baathists. In the end it argues that the 2007 Surge and Awakening/Sahwa wiped out most of the group’s leadership that allowed Iraqis to rise through the ranks thus allowing former Baathists to take on more prominent roles.

One thing it gets wrong, which was true for most of the books of its time was falling for the misinformation campaign IS launched about Abu Omar al-Baghdadi. Weiss and Hassan write that Abu Ayub al-Masri succeeded Zarqawi after his death in 2006 and claimed that Omar al-Baghdadi may have been a front man. They also believed that Masri was closer to Al Qaeda’s Ayman al-Zawahiri than Zarqawi and therefore was not committed to the war versus Iraq’s Shiite like the former leader. IS spread this story that Omar al-Baghdadi might not be a real person and if he was, he was just a figurehead and not the real leader of the group at the time to mislead the Iraqis and Americans about what happened after Zarqawi was killed. Omar al-Baghdad was the legitimate emir of the organization and helped rebuild it after the Surge and Awakening, something that the book documents when it discusses how IS went after the tribes that had turned on it with a carrot and stick approach, while not giving Omar al-Baghdadi credit for the strategy. This misinformation about Masri and Baghdadi was repeated by many other authors who had releases in the 2014-15 period when there was a boom in books on the group after it declared its caliphate.

Another issue with Weiss and Hassan was on how IS became such a phenomenon and brought in followers from around the world. They mention a researcher who argued that the Islamic State had a revolutionary appeal like communist and socialist groups had in the 1960s and 70s. Other ideas were that it promised a true Islamic life, exploited the Sunni-Shiite divide and offered a sense of adventure. The authors didn’t emphasize the utopian vision of the caliphate enough nor had much depth to its use of the Internet that spread its message internationally far beyond any previous jihadist group.

On the other hand, it has a deft portrayal of the Islamic State’s governance which it emphasized to its fans. Yes it provided services and gave a sense of stability to war zones when it first took over. At the same time it came with a huge dose of repression. It enforced sharia law, it made women cover themselves, it extensively used torture, it banned popular habits like cigarette smoking, and carried out public punishments and executions to scare and intimidate the populations it ruled. The book doesn’t try to make it is as if IS made the trains run on time. It focuses upon the system of oppression the group created to maintain its rule.

ISIS Inside The Army of Terror stands out amongst its contemporaries. This is the revised and updated version which includes new chapters that brought the story of the group up to 2015. Many other books released at this time went off into other subjects like the international jihadist movement to give context that might have been motivated by their knowledge of Al Qaeda more than the Islamic State. This release maintains its focus upon IS and shows that Weiss and Hassan put in the work to find out as much about their topic as they could. Yes, it has some flaws, but most of its main points have proven true, and it provides an extensive history of the group.