Review Voodoo In Sadr City, The Rise of Shiaism In Iraq 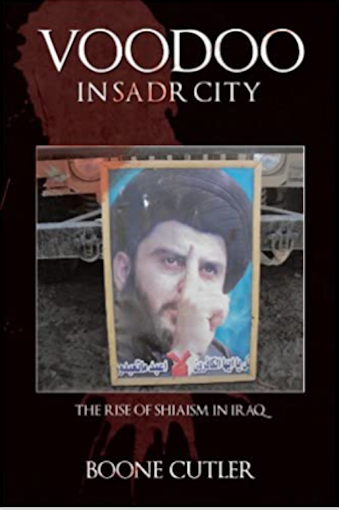 Voodoo In Sadr City was written by Sergeant Boone Cutler. He admits at the start that he’s no writer and you can tell as the book jumps from topic to topic. It was based off of memoirs he wrote while serving in Sadr City, Baghdad in 2005 as part of a psychological operations unit. His politics about the war are confused because he couldn’t make a coherent argument. What you can take away from the book is a glimpse into how Moqtada al-Sadr ran Sadr City.

One of Cutler’s main jobs was to try to get the community in Sadr City to stand up to the Sadrists but he ran into two main problems. The first was that one of his main themes was to tell people about freedom, democracy, and their rights under the new government. For example one neighborhood received no water for almost a week and he told residents they needed to go to the district council and complain. The problem was that the all the authorities in Sadr City from the mayors, to the councils, to the police were run by the Sadrists and its militia the Mahdi Army. Going to complain about certain things could get people killed. Cutler didn’t realize the contradiction between teaching democracy and the absent of it in the sector he was deployed in. The second problem was many army commanders didn’t appreciate psychological operations and ignored it. Some were also not interested in confronting the Mahdi Army. This caused Cutler no end in frustration as one of his pet peeves was that the U.S. was not fighting the Iraq war the right way by always focusing upon combat operations instead of non-lethal means to win over the Iraqis.

The highlight of the book was the author’s description of how the Sadrists ran Sadr City. They had sharia courts and the Mahdi Army ran punishment committees to enforce its rule and authority over the population. Abu Dura, known as the Shiite Zarqawi was the commander of one of these units. Women were especially singled out and targeted for breaking moral codes by these committees and suffered gruesome deaths as a result. They often had their bodies mutilated for instance, something not found on many male victims. The group also controlled the schools and the local police. It had access to police IDs and vehicles anytime it wanted and used them to move around Baghdad unhindered. It also went to police stations not only in Sadr City but other parts of the capital to kill people held in jails. It helped fund itself via corruption schemes. For instance it extorted money from the companies that collected garbage and delivered water to the district. Cutler described Sadr City like a prison where people were terrified of crossing the Sadrists. Even being seen to be talking to Americans in the wrong way could lead to threats and possibly death. The Mahdi Army was infamous for its cleansing of Sunnis from Baghdad neighborhoods during the sectarian war. Cutler adds how they terrified Shiite residents of the city as well.

Where Voodoo In Sadr City goes off track is when the author discusses his politics. In one instance he writes that he supported the 2003 invasion because the U.S. was attacked by Muslim extremists on 9/11 and the U.S. had to strike back at the heart of the Middle East and that was Iraq. Then later on he says that Saddam blocked Muslims extremists when he was in power. What was the point of the Iraq war then if there were no jihadists there that Cutler wanted to fight? In another passage he writes that Sadr was the kind of extremist that the U.S. had to confront, but then notes that Sadr only came to power after the U.S. invaded. Basically, the U.S. created the people it was supposed to fight in Iraq. Another time he complained about how the conventional army was not suited for Iraq because it only knew how to use firepower. Then he went home for a stint and got mad at the Democrats criticizing the war. That led him to say that the U.S. was winning every battle in Iraq and heading towards victory. Again, the U.S. military couldn’t be getting it wrong and winning at the same time. Needless to say Cutler would never win a debate on his beliefs.

Voodoo In Sadr City represented a small niche of Iraq War books by American soldiers who served in the country and wrote about their experiences. Again, the author admits he was not a trained writer and you can quickly tell by the style. It’s interesting because it explains how Sadr ran Sadr City, a topic not often mentioned because few journalists ever went there. At the same time, the book constantly goes from topic to topic and when Cutler writes about his political views they’re all over the place and often contradictory.