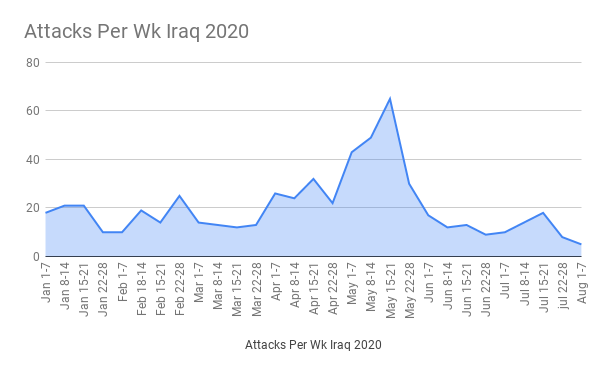 Violence remained very low for the ninth straight week in Iraq. This regularly happens. The Islamic State launches one or two offensives a year and then attacks dramatically drop off afterward. This is currently the lull after a Spring campaign by the insurgents. At the same time the militants are in a war of attrition against the security forces in the rural areas they operate in. Pro-Iran groups are also keeping up a steady rate of attacks upon U.S. targets in the country.

There were ten total incidents reported in the media in Iraq during the first week of August. Half of those were by pro-Iran groups that fired rockets at the Green Zone, Camp Taji and also accidentally on two neighborhoods all in Baghdad, plus there was another IED attack upon a convoy carrying supplies to U.S. forces this time in Dhi Qar. That left just 5 incidents by the Islamic State, probably the lowest figure for any week since 2003.

Incidents were spread across Dhi Qar, Diyala, Kirkuk, Ninewa with 1 each, 2 in Salahaddin, and 4 in Baghdad.

7 people died and 10 were wounded. There were all from the security forces. This is part of the on-going war of attrition by the insurgency against the government’s forces. Before civilians were always the main victims, but since the fall it has been the police, army and Hashd al-Shaabi that have been suffering the most losses. IS is attempting to assert its dominance over the rural areas it operates in. There were 6 casualties in Diyala and 11 in Salahaddin.

For the second week in a row there was only one incident in Diyala. That came when an army base was hit by mortar fire and then assaulted that left 2 soldiers dead and 4 wounded. That was the boldest attack this year in the province. It’s still surprising that incidents have been low recently since Diyala is the center of IS in Iraq. Usually it has the most attacks of any governorate.

There was also only one incident in Kirkuk. That was a sticky bomb which was found and dismantled in Kirkuk city.

The same thing could be said for Ninewa. An IED went off in the Sinjar district in the west. That was likely an old device that might have went off with the when displaced returned to the area. There was also a security sweep through the province.

Finally, there were two incidents in Salahaddin. First there was a gun battle in the Samarra district with an police unit that left 2 officers dead and 4 injured. There was also an attack in Metebija in the east that resulted in the death of 3 soldiers and 2 others wounded. Government forces also went through east Samarra during the week.