Embezzlement Case In Karbala Reveals Why Corruption Persists In Iraq 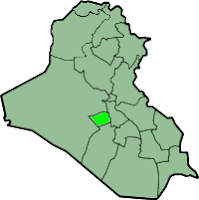 In early 2010 the Iraqi government launched a massive program to build over 300,000 housing units to address the huge shortage in accommodations throughout the country. In 2009 for example, a United Nations study estimated that Iraq was short 1.5 million houses. Karbala was one province that launched a development project to meet this need. That ran into problems in March 2010, when it was announced that some of the engineers who were in control of the project created a fake company to embezzle money. According to the head of reconstruction in the province, the engineers stole around 3 million dinars, roughly $2,500, before they were caught. Iraq has consistently been ranked one of the most corrupt in the world. In 2009 for example, Transparency International had Iraq tied for the fourth spot on its list of worldwide corruption. Any large development program such as the one recently launched by the government to address housing is threatened by this ever-present problem. It can derail entire projects by making second-rate products, and delay their completion as corrupt officials siphon off money.

What happened after the Karbala case was made public is also telling as to why corruption persists within Iraq. The head of reconstruction in Karbala said that they first approached the Housing Ministry about the case, but they refused to do anything about it. The provincial council then took it upon itself to prosecute the individuals involved, and had the local Integrity Committee take up the investigation. The head of the governorate’s council criticized how the Committee was dealing with the issue, mainly because it went public with the case. The council chief said that the case needed to go through all the necessary channels and a court before the Integrity Committee should have said anything to the media about it. The Karbala incident shows how ministries in Baghdad as well as the leading officials in the provinces simply don’t want to deal with corruption, and want to keep it out of the public’s eye. The Housing Ministry seemed uninterested in the case, and the head of the Karbala’s council was more concerned about the bad publicity it created rather than the fact a crime had been committed. Until corruption is brought under control it will continue to undermine the country’s ability to develop, and weaken housing programs like this one in Karbala.

Hi Joel, I was wondering if there is a way I can email you directly.
Lisa