What Is Security Like Today In Iraq? An Interview With Wash. Institute for Near East Policy's Dr. Michael Knights

EPIC is an organization that I used to write for. This is their new project to empower Iraqis to record and present their daily lives, and is something worthy of your support.
- July 27, 2012 2 comments:

Email ThisBlogThis!Share to TwitterShare to FacebookShare to Pinterest
Labels: History, Life in Iraq 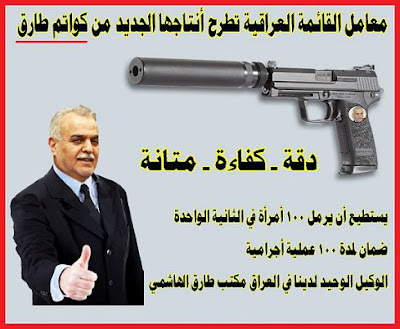 This ad from Iraq uses an image of Vice President Tariq al-Hashemi of the Iraqi National Movement (INM) to promote silencers for pistols. It talks about how accurate and efficient they are. Hashemi is currently on trial for allegedly running deaths quads using his bodyguards. As a result he fled to Turkey, and is being tried in absentia. This advertisement was obviously run by an opponent of Hashemi and his list the INM.
Hayder al-Khoei pointed out this ad on Twitter.
- July 25, 2012 No comments: