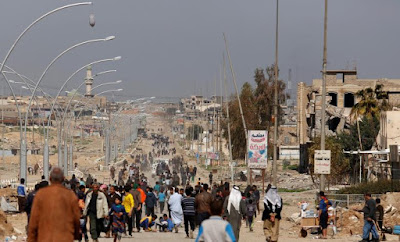 The police continued their frontal assault to take the Grand Mosque in the Old City of west Mosul, but the real story was the Golden Division moving up the flank of the district. On March 29 the Federal Police freed Malab while there was fighting by the police and Golden Division in Yarmouk, Zinjali and Tanak. The next day the Federal Police and Rapid Reaction Division took Alban, while Qadhib al-Ban was officially declared liberated. The Golden Division only reported taking an intersection and some buildings, showing that it was a slow day. The goal is for the police to tie down the Islamic State in the Old City, while the Golden Division surrounds the district. This is part of a revised battle plan after the ISF got bogged down trying to take the district. Now the goal is to attack the insurgents on multiple fronts.
Read more »
- March 31, 2017 No comments:

The Iraqi forces (ISF) are implementing their new plan for Mosul. The Golden Division continued their march along the western flank of the Old City. They attacked the Yarmouk and Maghreb neighborhoods. The unit claimed it freed the former last week. The Federal Police on the other hand are continuing their frontal attack upon the district moving into Midan, Suq al-Shaareen, Qadhib al-Ban, and a railway station. The police were making little headway into the area due to its dense layout and strong defenses by the Islamic State. That led to a revision of the battle plan, which now consists of the police holding down the insurgents, while the Golden Division attacks them from the flank. This highlights the development of the ISF’s ability to strategize and execute their plans. These were things they were having problems with when the Mosul campaign initially started, but they have since adapted.
Read more »
- March 29, 2017 No comments:

I was quoted by Paul Iddon in “This Is Not Your Father’s Iraqi Army” in War Is Boring.

There were a total of 179 incidents reported in Iraq in the first week of March. That was just around the same amount as the previous week when there were 181. Those high figures were due to the fighting in Mosul.