This Day In Iraqi History - Mar 30


At the recent Sulamani Forum held in March 2019 former Prime Minister Haidar al-Abadi claimed that there were only 8 civilian casualties in the Battle of Mosul. He told journalist Jane Arraf only eight women and children lost their lives during the fighting. Arraf challenged him on that and Abadi replied that he went to Mosul and checked the figures. He said, “Yes… Less than ten. Eight … Probably the number eight has increased a bit, and that was at one stage. … I was there! Looking in the streets, looking who is going where, who is going around, I made sure that there were no civilians, only combatants.” He went on to claim that he had gone to multiple sources and they confirmed his figures.
Read more »
- March 28, 2019 No comments:

This Day In Iraqi History - Mar 29 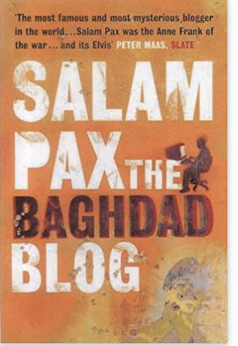 Salam Pax, real name Salam Abdul Munim, was an Iraqi blogger from Baghdad that came to prominence in the west before the 2003 invasion of Iraq. His blog “Where is Raed?” started off as irreverent posts about his life, his friends, his family, and his job. As the invasion drew closer it eventually took center stage in his writing. The blog also captured the attention of Westerners and its media because Munim spoke English and constantly referenced Western culture. It made people think that Iraqis weren’t so foreign after all if they were versed in western language and norms. The book covers some of his posts from September 2002 to June 2003. Salam Pax: The Baghdad Blog gives a mix of humorous and serious takes on the life of one Iraqi as things were turned upside down by the Iraq war.
Read more »
- March 27, 2019 No comments:

This Day In Iraqi History - Mar 28


The Iraqi insurgency continues to ebb and flow. In February attacks were slightly up from January perhaps pointing to the Islamic State coming out of its winter hibernation. March however has seen some of the lowest incident figures ever recorded by Musings On Iraq. That happened during the third week of March although casualty numbers were up due to another mass grave of IS victims being found and a clash between the Kurdistan Workers Party (PKK) and Turkish soldiers in Kurdistan.
Read more »
- March 26, 2019 No comments:

This Day In Iraqi History - Mar 27