Review Iraq and Back, Inside The War To Win The Peace

Review Olson, Kim, Iraq and Back, Inside The War To Win The Peace, Annapolis: Naval Institute Press, 2006 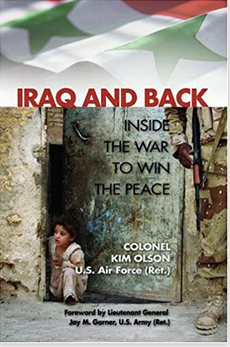 Iraq and Back, Inside The War To Win The Peace describes Retired Colonel Kim Olson’s time being the executive officer for Retired General Jay Garner who was in charge of the Office of Reconstruction and Humanitarian Assistance (ORHA) the first U.S. organization to run Iraq after the 2003 invasion. ORHA was completely overwhelmed by what it found and handicapped by a lack of institutional support from the rest of the U.S. government. Olson also relates her time being a female pilot in the U.S. Air Force. Those struggles basically prepared her for the challenges in Iraq. The book is like a journal that gives snapshots into the ORHA’s operations in Iraq as well as her career in the Air Force.


Olson was the first to publish a book about the ORHA, which has largely been overlooked because it existed for such a short time. In February 2003, she came from the Pentagon’s comptroller office that dealt with budgeting and was initially going to help the ORHA with appropriations, but Jay Garner quickly asked her to join his staff as his top aide. She agreed, and shortly afterward they flew to Kuwait to await the invasion. The group only had a staff of 230 people, little direction from Washington, and was supposed to run an occupied country. They went to the headquarters of the U.S. Central Command (CENTCOM) that was responsible for the war, that not only had no real plan for rebuilding, but was reluctant to let ORHA into Iraq after hostilities ended. Those were two major issues for the office throughout its short run. It never had the personnel necessary for the job, and it had little support from the rest of the government.

Iraq and Back starts off with anecdotal story that encompasses the challenges ORHA dealt with. In April 2003 shortly after the organization was allowed into Iraq, Garner and Olson went to a Baghdad hospital to announce that the U.S. was delivering a generator because the electricity network was out. A nurse grabbed Olson and told her they needed running water and medicine. When the generator was delivered after the visit, it was stripped and the hospital went back to having no power. On the way out, Garner met an Iraqi man who claimed a U.S. vehicle hit his son and he wanted $100 in compensation. It turned out the child had been hit by another Iraqi but he had no money so the father decided to ask the Americans for cash because they now ran the country. Here the Americans entered Iraq thinking they would be bringing gifts to an Iraqi population that had long suffered under a dictatorship. It turned out they hadn’t adequately planned for the challenges that entailed, and the Iraqis had their own thoughts about what they needed.

Garner responded to this challenge by getting out and about in Iraq and meeting as many Iraqis as possible, but he was facing structural problems that a personal style could not overcome. Garner would go out every day and travel up and down the length of Iraq and ask Iraqis how they were doing and what they needed. He would often wade into a crowd of people, that would usually scare his staff and especially his bodyguards. Olson was greatly enamored by Garner’s style and leadership and she always writes about him in glowing terms throughout her account. At the same time he kept on asking Washington for more money, but that was caught in red tape. He went to the military to ask for help, but they didn’t answer to the ORHA so he couldn’t get anything substantive from them. The main goals of the office were to deal with humanitarian needs, get reconstruction started so services were up and running and the oil industry, pay the salaries of public workers so that the Iraqi government would be operating again, hold elections and return sovereignty to Iraq. The problem was security undermined all those efforts. There was no organized insurgency yet in April 2003. The problem was more about the lack of law and order. As soon as the Saddam regime fell there was mass looting. That became organized as gangs began stepping in. There was a wave of car jackings in cities threatening civilians. The Iraqi police also disappeared and although some said they would go back to work, they stayed in their stations. Without basic rule of law little else could be done, and the situation was only getting worse. On the American end, Garner couldn’t get the support he needed either dooming his mission.

Just a few days after ORHA entered Iraq the Bush administration went in a different direction and appointed Paul Bremer to head the Coalition Provisional Authority (CPA) to run Iraq. Bremer didn't listen to Gardner, which greatly angered him. He quickly departed to go back to the U.S. while Olson stayed in Iraq for a little while longer working with the Interior Ministry to try to rebuild the police. Garner was livid and said that he was being made a fall guy for the Pentagon. It wasn’t just the Defense Department however, it was the whole U.S. administration that wasn’t ready for postwar Iraq. No part of the government adequately prepared for what the situation would be like and ORHA got stuck holding the bag. While Olson always tries to give a positive spin to what Garner was doing, she always let it be known that the effort was under resourced.

Olson tried to capture a glimpse into the short life of the ORHA. It could have never worked despite its best intentions because of the lack of support it got, and the growing chaos in Iraq. Iraq and Back is in no way a comprehensive account of the ORHA because it is in journal form. It just gives brief snapshots with no real analysis. At the same time it can serve as a short introduction to what the organization faced.