98 Dead In 6 Days Of Renewed Protests in Iraq


Protests continued in Baghdad and southern Iraq with more students and professionals joining in. Members of the oil industry have started coming out as well. Two more people died in the capital bringing the deaths to 98 since the unrest restarted on October 24. Sympathy actions continue in parts of northern Iraq, but under heavy pressure of the security forces. The political situation remains up in the air however.
Read more »
- October 31, 2019 No comments:

This Day In Iraqi History - Oct 31


During the night of October 28 an unknown group attacked the protest camp in Karbala. The result was hundreds of dead and wounded. This was the single deadliest assault upon the demonstrations since they started on October 1. That didn’t stop people coming out across eleven provinces. The pressure appears to be working as there were the first reports that Prime Minister Abdul Mahdi may be replaced. That may not satisfy the activists however as they are demanding new elections, not just the resignation of the current government.

This Day In Iraqi History - Oct 30


Iraq’s protests were ebbing and flowing. On October 28, they received a huge boost when thousands of students and professionals joined. That was offset by the latest acts of violence by the government forces.
Read more »
- October 29, 2019 No comments:

This Day In Iraqi History - Oct 29


October 27 saw people come out across Baghdad and southern Iraq again demanding that the government resign. There were some peaceful gatherings as well as confrontations, while the authorities continued their crackdown.
Read more »
- October 28, 2019 No comments:

This Day in Iraqi History - Oct 28


On the second day of renewed protests the Iraqi Security Forces (ISF) made a concerted effort to break up the crowds. They were largely successful as there was little of the vandalism seen the day before. The death toll also continued to rise as a result.
Read more »
- October 27, 2019 No comments:

This Day In Iraqi History - Oct 27


The much anticipated national protests returned to Iraq after the Arbaeen pilgrimage. There were demonstrations in Baghdad and all the south for a total of ten provinces. Things quickly escalated with the security forces and security guards firing into crowds, political and government offices being sacked and burned, and political and tribal rivalries going on in some areas.

This Day In Iraqi History - Oct 26

1920 UK High Commissioner Sir Cox formed Iraqi provisional govt after 1920 Revolt led
British to give up direct rule Abd Naqib of Baghdad was premier Had 21 ministers 12 with no portfolios Naqib opposed giving any ministries to Shiites
(Musings On Iraq book review of Reclaiming Iraq, The 1920 Revolution and the Founding of the Modern State)
(Musings On Iraq book review Dictatorship, Imperialism & Chaos, Iraq since 1989)
1920 UK High Commissioner Sir Cox said Basra province showed no support for Mandate Merchants in
province just wanted to maintain status quo Mid-Euphrates sheikhs and landlords the same Baghdad and Mosul provinces want to have role in govt Intellectuals were nationalists
1952 Baghdad Pharmacy College strike over exams Turned into riot that spread to other cities
1978 Pres Assad signed National Charter of Joint Action to counter Israel-Egypt peace treaty while
visiting Baghdad
1980 Iraq fired missiles at Dezful, Iran for 2nd day
1980 Most of the Iranian forces driven out of Khorramshahr Gave Iraq control of Shatt al-Arab Iraq lost
4,000-12,000 casualties
1980 Soviet news agency accused Iraq of aligning with US in Iran-Iraq War
1980 Iran objected to Iraq abrogating 1975 Algiers Agreement in letter to U.N. Said Iran still
following it Iraq broke it
1984 Tariq Aziz told Sec of State Shultz Iraq ready to resume full diplomatic relations with US after
17 yr break
(Musings On Iraq interview with author Anthony Tucker-Jones on Iran-Iraq War)
(Musings On Iraq interview with author Tom Cooper on Iran-Iraq War)
(Musings On Iraq book review The Iran-Iraq War 1980-1988)
(Musings On Iraq book review Iran-Iraq War, The Lion of Babylon, 1980-1988)
(Musings On Iraq book review The Iran-Iraq War)
1989 Sec of State Baker memo said that ties with Iraq important to shape Middle East politics
2001 After anthrax letters sent to Wash DC ABC reported anthrax trademark of Iraq’s WMD
program
2001 Czech Interior Ministry told press 9/11 hijacker Atta met Iraqi intel officer in Prague
2003 DepDefSec Wolfowitz arrived in Baghdad and met with Chalabi who warned him insurgents
knew he was in the country
2003 Baghdad’s Rashid Hotel hit by rocket while Dep Sec of Def Wolfowitz staying there 16 killed
18 wounded
2003 US military said were not many foreign fighters in Baghdad
2003 Iraq Survey Group found aluminum tubes Iraq tried to buy were not for centrifuges Pentagon
replied group had not finished its analysis
(Musings On Iraq article on the aluminum tubes story)
2003 Report CIA interviewed head of Iraq’s centrifuge program who said Iraq ended centrifuge work
after Gulf War and tubes had nothing to do with it CIA claimed head of Iraq’s centrifuge program was not telling truth about aluminum tubes Iraq tried to buy
2004 PM Allawi blamed US for deaths of 49 army recruits killed in Diyala by Zarqawi
2005 Report CIA review said Zarqawi visited Baghdad May 02 but probably didn’t have protection of
Iraqi govt Review of Zarqawi’s trip based upon interviews with Saddam era Iraqi officials Bush admin originally claimed Zarqawi was given safe haven by Saddam and said sign of Iraq-Al Qaeda ties
2006 PM Maliki interview refuted US timetable for Iraq Said ISF could take over security in 6 months
not 12-18 US set out Said he didn’t agree to timetable Said he met with Sadr and they agreed greatest threat to Iraq was Al Qaeda in Iraq and Baathists not militias
2006 Def Sec Rumsfeld said US had not gotten PM Maliki to agree to crackdown on militias Said Maliki
would work towards US benchmarks but would be no deadlines or penalties if he didn’t
2007 Islamic Army fought ISI outside Samarra Salahddin
(Musings On Iraq book review Iraq’s Sunni Insurgency)
(Musings On Iraq book review The Caliphate At War, Operational Realities and Innovations of the Islamic State)
2007 Report US and ISF targeting insurgent finance networks in Mosul Found kickbacks overbilling illegal
sales real estate deals black market gas and propane sales earned $40-$60 mil for insurgents over last few years
2008 US Special Forces raided ISI camp in Syria used to ferry foreign fighters into Iraq captured
huge amount of documents
2017 Iraqi forces renewed west Anbar op This time aimed at liberating Qaim along Syrian border
2017 More clashes between Iraqi forces and Peshmerga in Fishkhabur Dohuk and Altun Kupri Ninewa after
independence referendum
(Musings On Iraq Baghdad Ups Ante Attempting To Seize Control Of Kurds’ Oil Pipeline)
(Musings On Iraq book review The Great Betrayal, How America Abandoned The Kurds And Lost The Middle East) 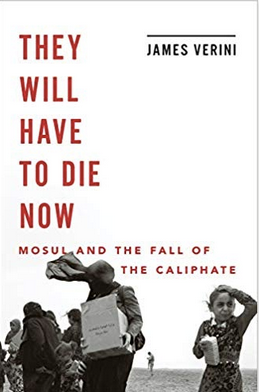 Seizing Mosul was what marked the rise of the Islamic State in the summer of 2014. It had been rebuilding for years, but taking a major city in Iraq was a shock to the world. The loss of the city to the Iraqi forces backed up by the international coalition three years later, was its biggest defeat. It was inevitable that this would eventually be put into a book, and James Verini a contributing writer to the New York Times Magazine and National Geographic was the first to do so in They Will Have to Die Now: Mosul and the Fall of the Caliphate. The author does a good job weaving together his time with the Iraqi forces, speaking to displaced families from Mosul, and plenty of history of Iraq, the Islamic State, and Mosul.
Read more »
- October 24, 2019 No comments:


Under pressure from Ayatollah Ali al-Sistani who called for the government to hold responsible those who were behind the murder of protesters at the start of October 2019, the Iraqi government released its report on the violence. It claimed that the commanders of the Iraqi forces (ISF) lost control of their troops during the demonstrations and recommended that several officers be removed or investigated. No politicians nor the Hashd were blamed. This was a white wash to cover up those really responsible.
Read more »
- October 23, 2019 No comments:

This Day In Iraqi History - Oct 23