Review The Role of the Military In Politics, A case study of Iraq to 1941

Review Tarbush, Mohammad, The Role of the Military InPolitics, A case study of Iraq to 1941, London and New York: Routledge, 1982 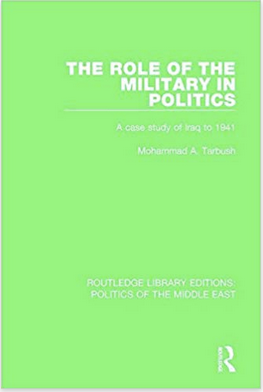 There are many parallels between pre-World War II and post-2003 Iraq. For example, several books have compared the British Mandate in Iraq after World War I with the U.S. occupation following the 2003 invasion. Each time a western country attempted to reconfigure the area to serve its interests, and each time the locals resisted, first with the 1920 Revolt and then with the insurgency and the Sadrist uprisings. Few have talked about how the politics were similar during the two time periods. During both occasions, the political parties had no real ideologies and were really vehicles for leading politicians to assume power, enrich themselves, and maintain their followers. Likewise, Iraqi institutions were weak and unable to deal with any real opposition or meet the demands of the public. While not explicitly part of Mohammed Tarbush’s The Role Of the Military In Politics, A case study of Iraq to 1941 because it was published in 1982, it’s easy to draw these parallels from his insights into early Iraq.


The main point of Tarbush’s book is to describe the development of Iraqi politics from the British Mandate to early independence, and how that allowed the army to become a force in the government. On the first point, Tarbush argues that King Feisal was central to the running of Iraq. There was a large number of political figures who wanted power and Feisal was able to manage them by constantly shuffling through governments so each individual got a piece of the pie. Most Iraqi administrations before World War II only lasted a few months on average. Eventually political parties were formed, but these lacked any real platform and were simply meant to bolster support for whoever the prime minister was. In turn, each government acted like the previous ones including even people from previous governments they had criticized. Tarbush believes this was the only way to keep these fractious politicians happy because the political system didn’t really allow for any organized opposition. This is actually a contested view of this time period in Iraqi history. Opinions of King Feisal vary greatly from those like Tarbush that believe he played an important role in bringing stability to the new country, to others like the British of the time that believed that he was weak and part of the problem. It’s not hard to combine both views, that he was both a good politician, but also caught up in the constant rivalries and bickering between the leading individuals.

What brought this system into crisis and led to the emergence of the military was the death of King Feisal in 1933. His son King Ghazi was young, inexperienced, and not always interesting in governing. That led to an intensification of rivalries between politicians for power, who increasingly came to rely on the army for support. Eventually a small group of officers believed they were the guardians of Iraq’s national interests and began seizing power, starting with a coup in 1936. These men would eventually be whittled down to four colonels and generals known as the Golden Square who would stage another coup in 1940 in response to Britain’s demand that Baghdad break relations with Italy over World War I. The Golden Square did not want to give into British demands seeing it as an affront to Iraqi nationalism. That led to the British invading and re-occupying the country in 1941. Tarbush finished by looking backwards and emphasizing how things changed after Feisal’s passing. Oddly, he didn’t look forward into the impact of the Anglo-Iraq War, namely that it eliminated a generation of military men from politics. The army would eventually make a comeback but that was almost 20 years later. Since his book was about the military and politics this is a large oversight.

While Tarbush was focused upon how and why the military came to play such a leading role in 1930s-40s Iraq, his book can be used to look at current Iraqi politics as well. Today’s Iraqi government is again dominated by individuals such as Moqtada al-Sadr, Ammar Hakim, Haid al-Amiri, Nouri al-Maliki, Massoud Barzani, etc. They each have their own political party that is bereft of ideology and largely act as vehicles for their leader’s personal advancement. The government is still used to enrich the leadership and dish out patronage. The country’s institutions are still weak, and unable to constrain these individuals, and there is still no concept of an opposition as all parties are included in national unity governments. Finally, in neither period was the interests of the public really considered. The growing gap between the people and their representatives would eventually lead to the 1958 coup. Today, there are annual protests every summer, which pass as the heat dies down. Could this anger eventually boil over to a revolution or will the politicians be able to ride out this wave of resentment? That’s another discussion however as it strays far away from what Tarbush was writing about.

Overall, Tarbush is one of a few books in English that deals with this period in Iraqi history. There are good insights into how the early Iraqi government developed, the individuals involved, and how their constant bickering eventually allowed the military to displace them only for their own shortsightedness that led to a second British invasion. Given the parallels that can be drawn between this time and today the book can provide more than just a history lesson to the keen Iraq observer.