Review Illusions of Victory, The Anbar Awakening And The Rise Of The Islamic State 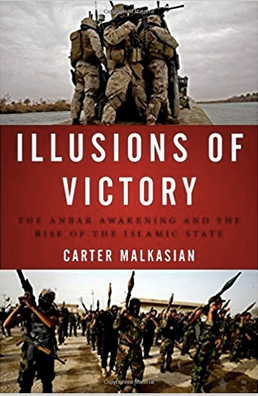 American images of Anbar province have gone through a series of extremes. By the fall of 2006 the Washington Post reported a leaked Marine intelligence assessment that said Al Qaeda in Iraq could not be militarily defeated in the area, and that without reconciliation Sunnis in the governorate would continue to fight. Many got the impression that Anbar was lost as a result. Just a month later the Anbar Awakening was announced. It’s success in winning the Battle of Ramadi, and the spread of tribal fighters throughout the province was imitated across central and northern Iraq by the Surge in 2007. That would lead to a plethora of articles and books on how tribal outreach was a turning point in the war, and the tactic was tried in Afghanistan. Carter Malkasian brings an entirely new perspective to the Awakening and the fight against the insurgency. Instead of just focusing upon the period of the U.S. occupation he expanded the history out to the war against the Islamic State that started in 2014. From his perspective, the Awakening was only a temporary victory with sectarian, cultural and political forces being more powerful in determining the future of Anbar.


Illusions of Victory, The Anbar Awakening And The Rise Of The Islamic State is a very short and readable retelling of the war in Anbar. It avoids military jargon, and getting too caught up in every detail that might have bogged down other writers. Malkasian divides up the book into chapters on how the U.S. found Anbar after the invasion, the rise of the insurgency, American and tribal strategies before the Surge, the emergence of the tribal revolt, and then the return of the Islamic State in 2014 when it overran much of the province. Malkasian was a former Marine having done two tours in Anbar, which was what inspired him to write.

Malkasian focuses upon what made the Awakening successful. He starts with what led a few sheikhs to fight the insurgency. The conventional wisdom was that Al Qaeda in Iraq (AQI) trying to impose its religious values, taking over businesses, and indiscriminate violence was what angered tribes. Malkasian provides an alternative view that AQI’s displacing the sheikhs and tribes from their positions in their communities along with asserting control over the economy and targeted attacks was what motivated the tribal leaders to form the Awakening. Also internal dynamics such as the unity of the three main tribes involved the Albu Risha, Albu Ali Jassim and Albu Dhiab, their esprit décor and ability to take punishment and losses kept them going when others had failed. Just as important was U.S. The United States got the tribesmen to join the police, provided them training, military support, gave money to sheikhs to maintain their followers via projects, and got the Maliki government to arm and pay them. All that allowed the tribes to sustain themselves in the face of the insurgency. AQI being obstinate also played a role, because it only retaliated when the tribes turned on them rather playing divide and conquer like they had with other tribal groups that opposed them in the past.

Malkasian then analyzes why the Awakening failed to maintain security and stability in Anbar. By 2007 the tribal revolt had spread across central and western Anbar, and General David Petraeus was trying to copy the model with the Sahwa in the rest of the country facing the insurgency. This was hailed as the turning point in the war, and created a whole industry of writers on the subject. That’s in part because those histories simply focus upon the U.S. occupation. Only a few would take up how Al Qaeda in Iraq rebuilt itself after its defeat by studying the Awakening and working to undo it. Some of this was the sheikhs own doing. Sheikh Ahmed Abu Risha who took over his tribe and leadership of the Awakening after his brother was assassinated wanted to control the government of Anbar. That undermined the unity the tribes had built up during the previous period as various sheikhs would begin to scheme against each other for political gain. Another issue was Prime Minister Nuri al-Maliki going after Sunni politicians after the U.S. military withdrawal, especially Finance Minister Rafi al-Issawi who hailed from Anbar, which led to protests across Sunni areas of the country such as Fallujah and Ramadi. That created another division within the tribes with those for and against Baghdad. Third, the U.S. pulling out its forces in 2011 meant that the tribes no longer had a steady benefactor. Maliki’s commitment to the Awakening was only temporary and he would try to assert control over the Anbar police who were largely made up of tribesmen and dismissed hundreds of them. The tribes still in the fight against the insurgency also lacked the fire support the Americans once provided them, which meant they would often be outgunned. Last, AQI in its latest manifestation the Islamic State of Iraq (ISI) would return to using carrots and sticks to exploit all of the splits within the tribes. They would target sheikhs, play upon rivalries and use the protests in Anbar to make their return in 2014. ISI also made a political and religious appeal to the population that won over many, especially since there was widespread anger at Maliki at the time. Eventually they would seize most of the province, and force the U.S. to return to the fight. That showed how all the successes of the Awakening were actually transitory rather than lasting as many had believed. The tribes proved fragile, and could not defend themselves without the support of the Iraqi government and American forces.

That brings up Malkasian’s conclusion. He believes that only a long term commitment of troops for decades can bring about the changes, security and stability the U.S. desires in countries like Iraq. He doesn't think that’s politically possible in most situations and should be a warning to future administrations about the possible success of any intervention. Even then he warns that the culture and politics of nations are still more powerful than outside actors. Tribes are naturally fractious, and the ones in Anbar began breaking up over controlling the governorate while there were still thousands of U.S. forces in the province. In the end, Illusions of Victory argues that only a long view that studies all of the actors involved in Anbar can provide a real history and lessons learned from what happened, and those are not as rosy as many initially thought.
- September 17, 2018