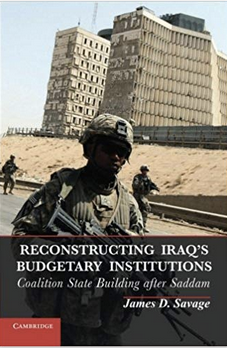 Reconstructing Iraq’s Budgetary Institutions is an academic analysis of America’s ability to bring about systemic changes to Iraq by changing how it made and implemented its budget. That might automatically deter many from reading it because it sounds too specialized for the average reader. While the topic seems esoteric, it actually is much more down to earth. Even before the 2003 invasion officials in the Bush administration knew that they had to get Iraq’s new government up and running. That included paying its civil services and getting its services working again. Those would greatly add to stability in the country. That quickly expanded to reforming Iraq’s institutions so that it could better construct its budget, empower the new provincial governments, reform and modernize its bureaucracy and get it to spend more of its capital budget, which goes towards investments. This proved a massive task as the Americans consistently tried to impose its own concepts and ideas upon the Iraqis with little consultation. In the end, the U.S. was able to get Baghdad to adopt a new method to draw up its budget, but failed at its other goals due to a failure to get the Iraqis to buy into the changes.


A crucial step in post-conflict societies is to provides services, wages and pensions. When those basic tasks are accomplished it provides a level of stability to countries. The academic literature on the topic emphasizes that foreign countries shouldn’t try to dominate the process because without including the host country’s needs and desires there is always resistance, and usually failure to bring about reforms. That’s exactly what the U.S. did from 2003-2011.

While much of the history on the early U.S. occupation point to poor planning before the 2003 invasion and multiple problems with the Coalition Provisional Authority (CPA) there were some exceptions. First, the Treasury Department was able to come up with some competent postwar strategies including paying salaries and pensions to Iraqi public workers using Saddam’s frozen assets that resided in the U.S. This was accomplished by flying in millions of dollars from America into Baghdad, which were then distributed to Iraq’s various ministries and agencies to pay civil servants. While there was little oversight to these cash distributions, and undoubtedly large amounts simply disappeared into unscrupulous people’s pockets, it did get the Iraqi bureaucracy back to work eventually. Second, the CPA, by building upon the existing budgetary system was able to successfully impose some new rules. It placed the Finance Ministry at the center of the process, said that Iraq had to follow international standards, have a unified budget, and got parliament and the new provincial governments which did not exist under Saddam to buy into the process and contribute. This was a huge success. The CPA drew up the 2003 and 2004 budgets with little Iraqi input, but then after sovereignty was returned in 2005 the Iraqi government followed the CPA rules because it benefited from passing an annual budget. The Iraqis were able to pass a budget each year, although not always on time, and were very adept at spending its operational budget that goes towards salaries and pensions. That followed the literature on the topic that when countries see the benefits of changes suggested by foreign countries they are much easier to implement and be maintained into the future.

What the Americans struggled with were making the Iraqi government more efficient, provide services, overcome corruption, sectarianism and regional differences. A perfect example of the difficulties the U.S. faced was the United States Agency for International Development (USAID) hiring a contractor to try to install a modern computerized budget system within Iraq’s ministries. Few ministers were interested in the system, the rank and file did most things using carbon paper, and what computers it did have were from the 1980s. That meant the contractor had to provide basic computer literacy to Iraq’s civil service. It also struggled with inconsistent electricity supply and the lack of an adequate telecommunications system to support the computer network. Because the Iraqis were never interested in the system it was never fully installed nor ever really used and ended up being a complete fiasco. Other attempts to build capacity through training and assistance programs also generally failed because there was no overall strategy, competition between the U.S. agencies involved undermined the effort, and there was no serious accounting for whether they worked or not. In 2007, during the Surge, the Bush White House and Congress set a benchmark that Iraq appropriate $10 billion for its capital budget for investment and reconstruction and spend it. While that amount was included in the budget that year, the country was never able to effectively spend that part of the budget. Iraqis had little experience in making modern contracts and U.S. efforts to help them with it struggled. There were all kinds of problems and rivalries between ministries and the provincial and central government in picking projects. For instance, both the Finance and Planning Ministries had to jointly sign off before any project moved forward but the two refused to cooperate and barely talked to each other as they were controlled by rival political parties and sects. Again, because the Iraqis were largely resistant to bureaucratic reforms little of what the United States pushed on this front worked.

Finally, author James Savage ended with an important warning. Many commentators noted that the United States learned many lessons in fighting insurgencies in Vietnam, and then purposely tried to forget them. That was because the military leadership wanted to return to the Cold War and preparing for the Soviet Union. When Iraq came around the American forces had to re-learn much of that lost knowledge. The same thing is happening today with America’s experience with Iraq’s budget. The Obama and Trump administrations wanted to avoid another Iraq, and American agencies like State and Treasury have tried to put the war behind them. Again, that means the experience they had with what worked and didn’t will likely be forgotten and the next time the U.S. finds itself in a nation building experience whether it wanted to get into or not will have to be mastered all over again likely leading to huge amounts of wasted time, effort and money like happened in Iraq. This is an ironic parallel with the Iraqi government, because with both things the bureaucracy does not like are rarely accepted, and often pushed aside with time.

Reconstructing Iraq’s Budgetary Institutions is an interesting and short read that teaches important lessons. While it may not sound like something everyone might be interested in, getting Iraq’s budget up and running again was integral to rebuilding the country. Without it there could have been even more unrest in Iraq. While the U.S. failed at many of its efforts because it tried to get the Iraqis to act like Americans rather than asking what the Iraqis wanted themselves, there were some successes like getting a budget passed each year following new rules that the U.S. introduced. That has helped Iraq receive aid from other sources and get its basic functions operating even if they don’t always work efficiently like services. This should be read in conjunction with the plethora of books that cover the fight against the insurgency, because it explains the other tasks the Americans were working at to build the new Iraq, and what a struggle it was.