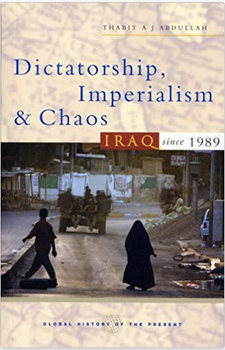 Thabit Abdullah was a professor at York University in Canada and an Iraqi expat when he saw the chaos that ensued in his former homeland after the 2003 invasion. That inspired him to write Dictatorship, Imperialism & Chaos, Iraq since 1989. Despite the title, the book is actually a short, only 121 pages of text, history of Iraq from ancient Mesopotamia to 2006. Abdullah provides a rather conventional narrative of Iraq, but it’s good for any beginner looking for a compact introduction to the subject.


Abdullah had several implicit and explicit themes to his writing. One was the failed attempt at building a civil society that could bring together Iraq’s diverse population. Another was the parallel between the British Mandate after World War I and the U.S. occupation after 2003. A third was that because of Iraq’s location and two rivers it has always brought different people together, but also led to constant conflicts.

The first third of the book goes back to ancient Mesopotamia up to Saddam Hussein taking power in 1979. It emphasizes the growth of civilization and administration, but also the various wars that arose with one empire after another invading and conquering the land.  The Ottomans for instance, brought about modernization of the bureaucracy, integration into the world economy, and transformation of the social and class system. Turkification during the late-Ottoman era also led to the birth of Arab nationalism that would shape most of modern Iraq history.

World War I led the British to invade and create the modern state of Iraq. This brought about immediate Iraqi resistance with the 1920 revolt that led London to change its policy from direct rule to promising Iraqi independence under British advisement. That created a sense of Iraqi nationalism focused upon expelling the British. Eventually an Iraqi parliament was created led more by personalities than ideologies. Abdullah compares that the U.S. occupation. Both times a western country attempted to impose new governments and rules upon Iraq with little inclusion of the locals. The legislature today is again based around individuals rather than any political ideas, and foreign rule led to armed opposition in each case.

Finally, the state has consistently failed to create a society and politics that could include all of Iraq’s peoples. Instead, the country was pushed towards elite rule with first the military that would constantly overthrow the government, then the ascension of the Baath Party in 1968 that culminated in Saddam Hussein centralizing all power in his hands. This was also almost exclusively Sunni Arab rule with the exception of General Qasim who was of mixed background. At the same time, the development of the oil economy meant that the state became independent of the public for sustainment via taxes, while the people came to be reliant upon the government for jobs and services. Today, Iraq has a developing democracy, but the new political elite are still separated from the people and still have not created an inclusive vision of the country.

All of these themes have been used in other books about Iraq. The lack of a civil society for example has been expounded by other scholars to explain the growth of sectarianism in Iraq. What makes this different is that a reader can be introduced to all of these ideas in a very short volume, and use it as the basis for further research.