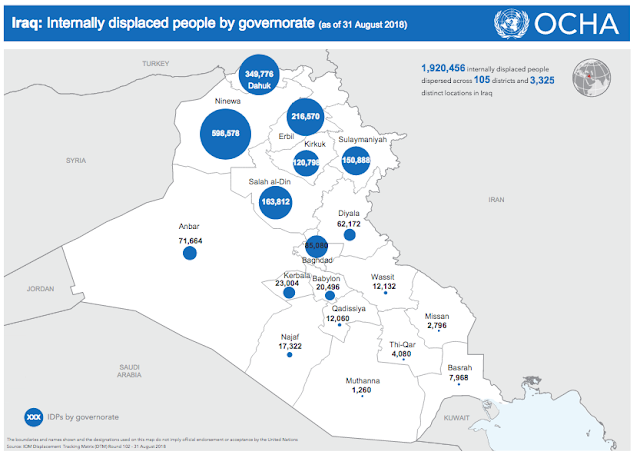 The United Nations released the latest figures on Iraq’s displaced (IDPs). In July the total number of IDPs dipped below 2 million. While that showed progress on the issue, fewer people are going home since the start of the year.

Various aid groups have reported on the change in attitudes of IDPs. Originally, a majority said they would return as soon as the war against the Islamic State was over. Now they are concerned about security, the lack of services, destroyed homes, few jobs and little money. There is also a sizeable population of people that are banned from returning because they are accused of being connected to IS. There is another group of people that have made the trip back to their original areas, found the situation wanting and left to remain displaced. Iraq looks to be reaching the point where all those that are willing to go back have done so and the rest will simply settle where they are or attempt to leave the country.

UN Office for the Coordination of Humanitarian Affairs, “Iraq: Internally displaced people by governorate (as of 31 August 2018),” 8/31/18

Iraq’s oil exports have been relatively stable for the last 11 months. The main difference was the surge in prices during the spring of 2022...