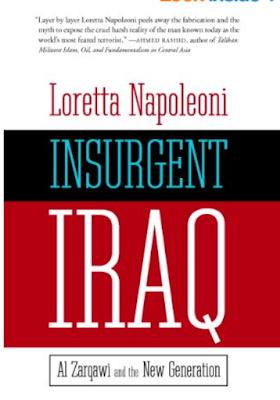 In Insurgent Iraq author Loretta Napoleoni attempted to write one of the first biographies of Abu Musab al-Zarqawi the leader of Al Qaeda in Iraq. She tried to place him within the larger jihadist movement. Her main argument was that Zarqawi was created as a boogeyman by the U.S. and Iraqi governments to first justify the invasion of Iraq and then disparage the insurgency as a foreign rather than Iraqi effort. There are two major problems with the book. First, the author has a stream of consciousness style of writing, which means she skips from topic to topic some of which are not related to Zarqawi. The second, is that she discounts many events believing they were part of the propaganda campaign surrounding the Al Qaeda in Iraq founder. In the end Zarqawi’s story and importance gets lost.


Insurgent Iraq starts off well covering Zarqawi’s background and how he became involved in the jihadist movement. It includes many major events in his life such as how he began as a petty criminal in Jordan and then became interested in the war against the Soviets in Afghanistan but travelled to Pakistan too late. He then met Abu Mohammed al-Maqdisi who became his mentor in Salafism. Later he went back to Afghanistan, created his own training camp, but was then driven out during the 2001 U.S. invasion, and ended up in Iraq. His plan was to exploit the situation and provoke a sectarian war that would drive the country’s Sunnis into his camp. Along the way Napoleoni tries to explain the Salafi milieu that Zarqawi joined. There was Bin Laden who argued for an international struggle against America as the root cause of the problems Muslims were facing. Aymann al-Zawahiri would join Al Qaeda and justified attacks upon other Muslims. Maqdisi introduced Zarqawi to taqfir – apostasy and other ideas. Zarqawi was unlike all of these men who were intellectual and well off. He came from a poor background and had little education. He was influenced by his predecessors but made his own analysis of Iraq when he entered the country arguing for a war against the Shiites as the way to achieve his political goal of rallying Sunnis to his cause. If the author had just stuck to these issues the book would have been very good, but it didn’t.

One problem with the book was the author’s writing style, which often went off topic. For instance, in one section Napoleoni talks about how Aymenn al-Zawahiri justified suicide bombings. She then links that to suicide bombings in Iraq and how they were different from the ones in Palestine. The book then goes into the attempts at similar attacks in the West, and how a new generation of young jihadists had been inspired by what they saw on the Internet from places like Iraq. That leads to bin Laden, and then off to another issue. Several times Insurgent Iraq includes that that are not even related to Zarqawi. The author writes about Moqtada al-Sadr and his revolt against the U.S. occupation in Iraq. There’s a section on Iraqi political parties and their stance on the American presence. The result is that Zarqawi gets lost in all the excess information that Napoleoni tries to cover. An editor would have really helped to refine her argument and make it more focused. Instead, the writing is full of tangents.

The second issue is that Insurgent Iraq gets thrown off by its own argument. Napoleoni believed that the Americans and Iraqis propped up Zarqawi as their bogeyman. First, the Bush administration claimed he was Al Qaeda’s man in Iraq and supported by Saddam Hussein to help justify the invasion. Then both the U.S. and Iraqi governments claimed the insurgency was led by Zarqawi and his foreign fighters to try to deny that Iraqis were taking up arms against the new Iraq. There were good points. Zarqawi was not an Al Qaeda operative nor was he connected to the Baathist regime. It was also true that the Iraqi insurgency was always made up of locals and focused upon expelling the Americans rather than being led by Zarqawi who wanted to transform the conflict to match his vision. The problem begins when Napoleoni discounts events believing they were created by the West and Iraq to boost Zarqawi’s standing for their own purposes. As a result, she didn’t think Al Qaeda funded Zarqawi’s camp in Afghanistan, that he was behind the assassination of U.S. diplomat Lawrence Foley in Jordan, that he had a network in Europe that was trying to target Jews, and that Syria supported the flow of foreign fighters into Iraq that went to Al Qaeda in Iraq. These all actually happened. In effect, Napoleoni became too dismissive, and questioned every major story about Zarqawi. She didn’t believe that he had become such an influential figure.

Napoleoni should be commended for writing about Zarqawi’s place in the jihadist movement so early on, but her conclusions and writing style ultimately undermined her. The book collected together much of his early history, but eventually became too cynical about his impact, and the author got off track far too many times. Today there are a range of books that cover Zarqawi in a much more thorough fashion.