Review The Modern History of Iraq 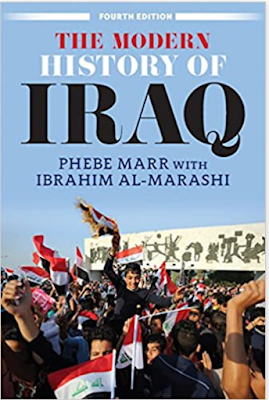 Phebe Marr is considered one of the great Iraqi historians, and her book The Modern History of Iraq is one of the basic books to read to get an introduction to the country. It is laid out in chronological order going through the major time periods from the Ottomans up to the U.S. invasion. Marr outlines the strengths and weaknesses of each era. Her thesis is that Iraq has always been a challenge to rule due to its diversity. When governance is done well Iraq has created great things, but when done badly it has led to chaos. Unfortunately, the nation has had more of the latter since its creation.


The Ottomans were one of the most important influences upon Iraqi history. They created a centralized administration and a secular education system. They also ruled through authoritarian paternalism where the elite believed they knew what was best and therefore didn’t have to consult with the populace. These had huge influences on modern Iraq. The bureaucracy was inherited by the British and would become the basis for the Iraqi government. The schools gave birth to an indigenous elite, mostly urban Sunnis, who would go on to rule the country in an authoritarian manner. This was the first example of Marr’s thesis. The Ottomans ran what would become Iraq for centuries and had plenty of problems, but their long reign showed they were effective, and they had one of the most important impacts on the new nation.

The thirty year rule of the monarchy under first the British Mandate and then independent Iraq was much more of a mixed bag. Ideologically it couldn’t resolve the differences between the Arab nationalists who wanted to focus upon the region and the reformists whose priority was Iraq nor the split within the Pan-Arabists between the politicians who were mostly pro-British and the army who were anti-imperialist. The latter came to see themselves as the true leaders of the country and launched a series of coups. The reformists, especially the Communists who had the largest popular base in the country led increasing protests especially against the English influence, which led to more and more repression. The elite also ruled through the army and the rural landlords when an increasing amount of the population was becoming urban. Finally, oil was developed making the country economically dependent upon the industry. Here was the other side of Marr’s thesis. The elites were never able to unite and deal with the opposition. The pan-Arabist ideology that dominated meant an Iraqi identity was never forged that could appeal to all of the country’s peoples. The growing urban population was largely ignored both politically and economically. Iraq is still oil dependent even to this day, and the continued British influence and the power of the military led to the 1958 coup that wiped out the monarchy. Despite the monarchy ruling for much longer than many of the governments that followed it was never able to overcome the differences in the country and paid the ultimate price for that.

Many people were drawn to Iraq because of the U.S. invasion and occupation, but to know the country one has to read about its history. Phebe Marr’s book is one of the first you should look to. It covers the politics, the economics and the society of Iraq in an easily read style with some good overall insights. One can draw upon Marr’s writing to find parallels to how modern Iraq is being run as well. The oil dependency, the neglect of the population, the benevolent authoritarianism are all still present in the country today and The Modern History of Iraq explains some of their root causes.