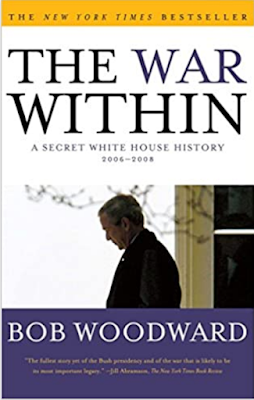 The War Within, A Secret White House History 2006-2008 was the fourth and final book Bob Woodward wrote about President George Bush’s wars. Bush At War covered how the president decided to go to war in Afghanistan and Iraq without a strategy. Plan of Attack covered how the White House didn’t understand the conflict they were entering in with Iraq. State of Denial was about how the Bush administration screwed up the planning and occupation of Iraq. Finally, The War Within was about the decision to change strategy that led to the Surge in 2007. Woodward focused almost exclusively on the major players in Washington D.C. relying upon extensive interviews with them including Bush, although there are references to what was going on in Iraq. The author broke his usual style and actually commented upon events. Woodward thought Bush was never honest with the American public about what was going on in Iraq always talking about winning and victory when everything was falling apart. When it came time to change policy he never set any deadlines and skipped any process. In the end, The War Within argues that Bush failed as a leader.


Woodward starts with what was wrong with America’s Iraq strategy, which was there was no strategy. President Bush wanted victory and was sure that was what the U.S. was doing. He said his goals were to make Iraq a democracy, not have it threaten its neighbors, and have it be an ally in the war on terror. He never explained how those were to be achieved. The actual policy however was set by the military commander in Iraq General George Casey and that was to build up the Iraqi Security Forces so that the Americans could withdraw. There was no plan to win as Bush always talked about. Not only that, but General Casey didn’t think Bush understood how wars worked. Bush always wanted numbers like how many insurgents were killed and how many operations the Americans were conducting. Casey though the president believed the Iraq conflict was all about killing the enemy. In his first books it seemed like Woodward supported Bush’s decision to invade Iraq. By this time however, he had joined the majority of Americans who thought the war was going wrong. He agreed with Casey that the problem started at the top with the president making vacuous statements about transforming Iraq while being oblivious about the situation on the ground, and not comprehending that his administration had no plan.

By the summer and fall of 2006 all the major parts of the American government including the president agreed that Iraq was not working and there needed to be a change of course. In July 2006 the National Security Council was the first to start a policy review. That was followed by Secretary of State Condoleezza Rice doing the same at State, Bush himself saying there needed to be a new path in August, followed by the Joint Chiefs of Staff in September. Retired General Jack Keane also began talking to Defense Secretary Donald Rumsfeld, Vice President Dick Cheney, and eventually the president as well starting in September about how the U.S. was losing in Iraq. Keane lobbied for a new counterinsurgency strategy that would become the Surge. In November, all the major agencies came together to go over their various ideas on what to do. Unbeknownst to everyone except National Security Adviser Stephen Hadley, Bush had already been won over by Keane’s idea. It was then up to Hadley to convince the other parts of the government that this was going to be the new policy. All of this was done secretly as well because the White House didn’t want to admit that things were not going well in Iraq when there were Congressional elections in November. To Woodward this was another example of Bush’s failure. First, the president either didn’t know nor care what his government was thinking about Iraq. He skipped the process that was already at work over a new policy and decided on his own that there would be a Surge taking the advice of an outsider. Second, once he accepted this idea he never said it was a priority to work out the details and put it in place. Instead, he actually held up the public reveal of it because of the November vote, which the Republicans actually lost largely because of Iraq, and then had his National Security Advier work things out. This also pointed out how Bush would not offer any realistic appraisal of the situation in Iraq to the American people. He demanded everything be positive even when he knew the opposite was happening.

The War Within was a condemnation of Bush’s presidency. Bush was always assured of his decisions. He talked about how he went with his gut. He didn’t like discussions on major issues. All of these proved the wrong approach to Iraq. Bush never admitted he or the war were wrong. After the Surge he thought the U.S. had won and was now the dominant power in the Middle East. Again, this arose from the fact that he never understood the conflict nor the strategy. The Surge was supposed to bring down violence so that Iraqi politics could focus upon reconciliation and rebuilding. It did the former, but not the latter. There were no serious political changes. Like the entire war Bush was ready to declare victory before it was even finished.