Violence Drops In Iraq In March 2020 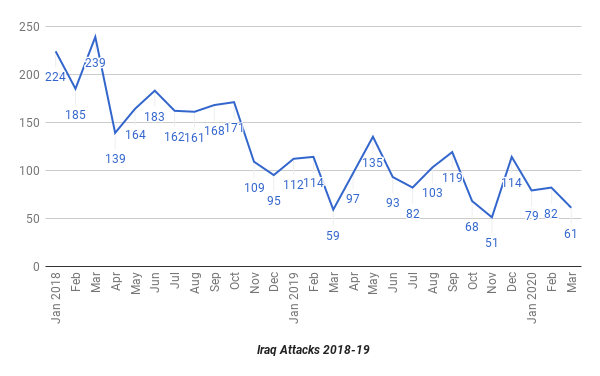 Violence dropped in Iraq perhaps because of the coronavirus outbreak. The Islamic State for instance, initially said that its fighters should not travel to different areas during the pandemic. Whatever the case might be there were far fewer incidents likely carried out by the group. Pro-Iran Hashd forces however increased their attacks on U.S. forces and personnel in March.

There were a total of 69 incidents recorded in the press in Iraq in March 2020. 8 of those were done by pro-Iran Hashd groups as they lobbed rockets at the Green Zone four times, Camp Taji in northern Baghdad two times, Besmaya base in southern Baghdad one time, and Sadiq base in Salahaddin. The other 61 incidents were the work of the Islamic State.

Diyala as usual had the most violence with 26 incidents. That was followed by 14 in Baghdad, 12 in Salahaddin, 8 in Ninewa, 6 in Anbar, and one each in Babil, Kirkuk, and Irbil. Those led to 47 dead and 90 wounded. 1 British soldier, 4 US soldiers, 11 Hashd al-Shaabi, 12 Iraqi Security Forces (ISF) and 19 civilians lost their lives. Another 3 US soldiers, 19 ISF, 22 Hashd and 46 civilians were injured. Diyala had the most casualties with 42, followed by 37 in Baghdad.

Attacks went down in Baghdad. When protests started in the capital in October 2019 IS held back leading to only 3 incidents that month. The insurgents slowly picked up operations afterward reaching 24 in February 2020, the most seen since 25 in September 2019. In March however, things dropped off to just 7. All of these were low level, but on March 24 a family was murdered in their home which was burned down, and an IED was planted to hit the ISF when they showed up to investigate. Previous to that on March 12 3 IEDs went off inside the city itself. Over the last few months the militants have been able to explode multiple IEDs in Baghdad on the same day showing their effort to return to the city. That is a change because the Islamic State is almost completely rural in nature right now after is defeat on the battlefield. It must return to Iraq’s cities to remain relevant and its number one target is the capital. The multiple IEDs on one day show that it is rebuilding its networks, but it is still very slow going for the group. Additionally there were the 7 attacks by pro-Iran Hashd discussed above. Groups allied with Tehran are seeking to provoke the Americans to overact and kill Iraqis, which they hope can then be used to motivate parliament to expel all foreign forces from the country. 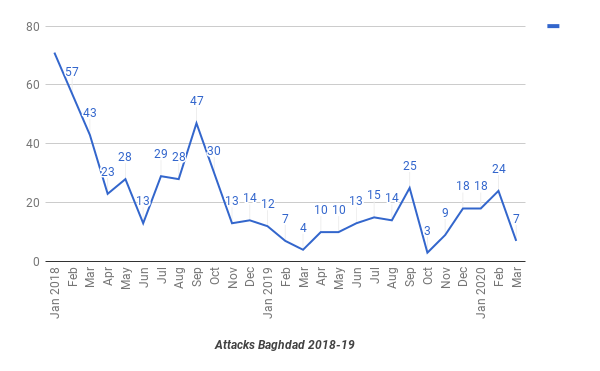 Kirkuk and Ninewa also saw reductions in violence. Incidents in Kirkuk had been declining for the last three months. They went from 17 in December 2019 to 11 in January, 8 in February, and just 1 in March. That was an attack upon a checkpoint. The same pattern was seen in Ninewa with 19 incidents in December, 13 in January, 12 in February, and 8 in March. There was one shoot out with insurgents, but the rest were IEDs and one shooing, although three suicide bombers were killed as well when they ran into the security forces. Ninewa has become a secondary front recently, but Kirkuk usually has one of the higher incident counts each month. There is no explanation right now for why things fell off so much there. 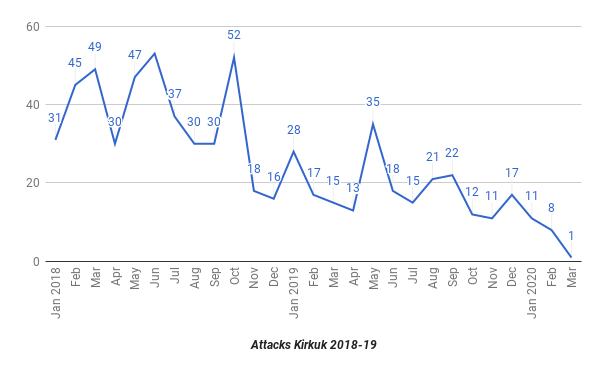 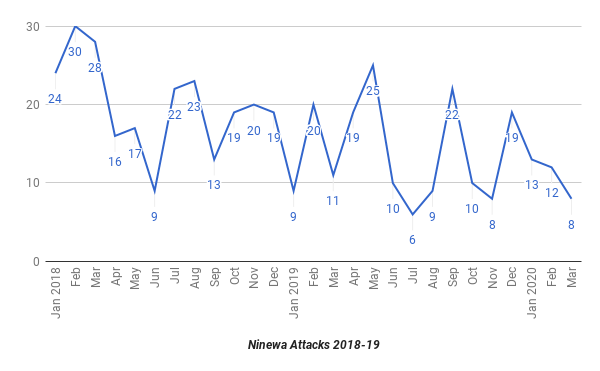 IS operations in Anbar have leveled off recently. After no incidents in November there were 5 in December, 7 in January, 5 in February, and 6 in March. That included rockets fired at a village, a mukhtar hit with an IED, and two checkpoints being shot at. Anbar used to be a main front for the militants, but they’ve since abandoned it mostly to use the province for moving men and material in from Syria. 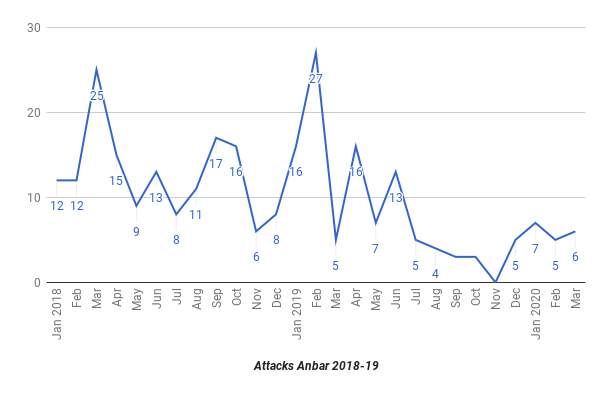 Diyala continues to be the center of militant activity, but it too has leveled off. There were 23 incidents in January, 24 in February, and 26 in March. That included 2 attacks on checkpoints and four gun battles. As usual 14 of the attacks took place in the northeast around the Jalawla-Khanaqin districts. There the insurgents have exploited the gap between the government and Kurdish forces. 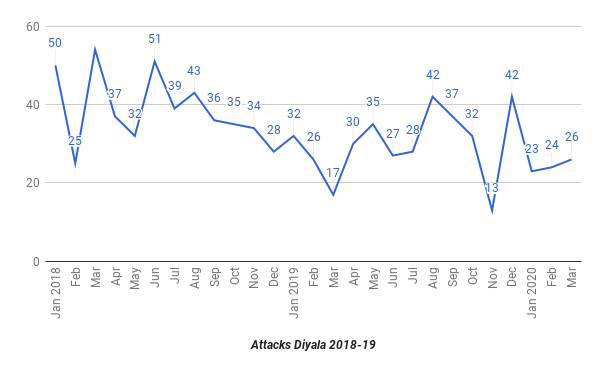 Incidents continued their up and down path in Salahaddin. In December 2019 there were 12, followed by 7 in January, 6 in February, and then 11 in March. 3 of those were gun battles with the security forces. 1 was a rocket attack by pro-Iran groups. Many IS members are based in Salahaddin and travel back and forth between Diyala, but the number of attacks has remained relatively low for several months now. 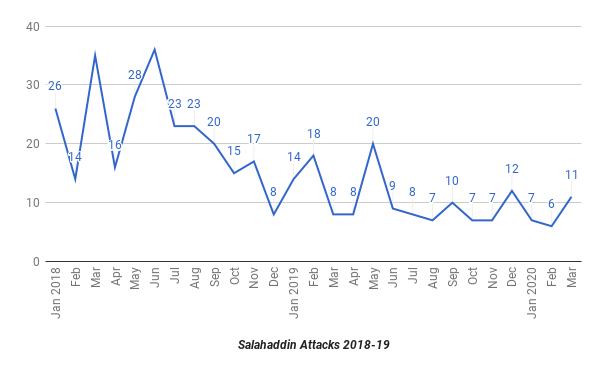 Additionally there were one incident each in Babil and Irbil. In the former an IED hit a Hashd patrol in Jurf al-Sakhr. That district is a military base for Kataib Hezbollah and completely empty of civilians as a result. IS has still been able to plant explosives there each month. In the latter, a joint Iraq-Coalition operation in the Qarachogh Mountains led to a gun battle where two U.S. soldiers were killed. For the last two months IS has been making probing attacks in southern Irbil leading to this raid.

Al Aalem, “18 Iraqi militants killed in Syria with a coalition raid .. Two Americans and two Britons die in the bombing of Al Taji,” 3/12/20

Al Ghad Press, "An armed man kills a woman in front of her house in Abu Saida district, northeast of Diyala," 3/15/20
- "Violent clashes between the popular crowd and a group of ISIS south of Salahaddin," 3/15/20

Al Maalomah, "A farmer was killed and a woman and her child were wounded by two explosions in Diyala," 3/3/20
- "Thwarting an infiltration attempt by ISIS on the border between Diyala and Salahuddin," 3/11/20
- "Two soldiers martyred due to the explosion of an explosive device in Diyala," 3/25/20
- "Two soldiers were killed and two others were wounded when a roadside bomb exploded in Anbar," 3/19/20

Sky News Arabia, "Our reporter: Two rockets landed inside the Green Zone in Baghdad, and the American embassy sirens," 3/5/20

Sotaliraq, "Electricity issued a statement on terrorist attack on the Tarmiya secondary station," 3/24/20
- "One person was killed and his son wounded in an armed attack in Khanaqin," 3/25/20

Xinhua, "4 Iraqi soldiers wounded in rocket attack on military base near Baghdad," 3/14/20