Iraq Suffers 40% Drop In Its Oil Revenues In March 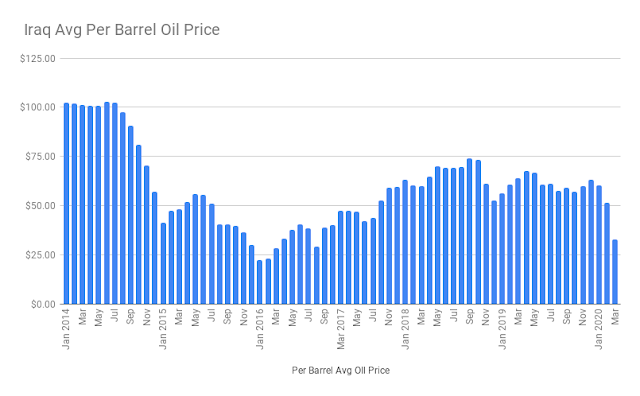 Iraq is facing an economic crisis. First, Saudi Arabia and Russia got into an oil war collapsing prices. Then the coronavirus hit greatly reducing the demand for oil driving down the value of crude even more. Iraq is the most oil dependent country in the world so this will have a devastating effect. To make the situation worse the country is facing a leadership crisis so it has only come up with short-term solutions to a long term problem.

Iraq’s revenue dropped 40% from February to March. It exported an average of 3.39 million barrels a day each month, but prices went from $51.37 per barrel in February to $32.73 in March. That resulted in profits going from $5.053 billion in February to $2.989 billion the next month. That was the lowest price since August 2016 when Iraqi petroleum went for $29.24. That was also the least amount of money Iraq earned since $2.894 billion in March 2016. The world energy market continually ebbs and flows. At the end of 2014 and the close of 2015 the market hit two low points. Baghdad never plans for these events even though it will be hurt the most as over 90% of its money comes from petroleum. That’s because the elite rely upon oil money to maintain their power and enrich themselves. They therefore have no impetus to change the economic system in Iraq.

The lower oil prices mean Iraq is not earning enough money to cover the its bills. It needs $3.5 billion a month for its public workers, which is the largest part of the budget. Before that however, it must pay $1 billion a month to the oil companies. More money is required to pay for pensions, services and investments. The result is a huge deficit with no plans for how to remedy it.

The reason why Iraq has no plans for how to deal with this dual crises is because the country doesn’t have a prime minister. Adil Abdul Mahdi resigned in November 2019 and the ruling parties have failed to agree upon a replacement since then. That has led Baghdad to issue a number of initiatives none of which offers a realistic answer to the country’s dilemma. For instance, at the end of March the Basra Oil Company asked energy companies to accept up to a 6 months delay in payments and cut their budgets by 30%. Then the Oil Ministry said that it wanted to boost oil output in April by raising production by 200,000 barrels a day with the hopes of reaching 3.6 million barrels a day in exports. At the same time it has cut its prices to its customers. Its Basra Light crude is being offered to Europe at around $10 per barrel. It is also considering dipping into the Central Bank’s $62 billion reserve of foreign currency. These are all short term plans with no strategy behind them. Attempting to boost exports when there is a glut in the energy market looks like an act of desperation to try to make as much money as possible before prices dip even lower. Of course trying to increase sales will only add to the current surplus. Baghdad is also hoping that the cut in spending by the oil companies and not paying them will not reduce their output, but that appears to be wishful thinking as well given the global environment. Using the country’s foreign reserves is another stop gap measure. Iraq is running such a large and growing deficit that it might run through this account in around a year’s time. Even if Iraq had a premier it might not do better. The country is notoriously bad at planning and even worse at implementing. There is a massive austerity plan heading Iraq’s way and massive borrowing as well. The sad thing is when the energy market recovers Iraq will go right back to massive spending on useless government workers until the next crisis hits.

Gebeily, Maya, “As prices fall, what are the threats to oil giant Iraq?” Agence France Presse, 4/1/20