Islamic State Not Following Their Usual Pattern In Attacks In Iraq

September 2019 was the second month in a row that incidents in Iraq went up. Usually the Islamic State launches a spring-summer offensive and then during the fall things start quieting down. This year, there was a spike in attacks in May, little during the summer, but then they have gone back up in the fall. The militants are in the process of rebuilding, trying to preserve their cadre and leadership, and are obviously changing their strategy as a result. 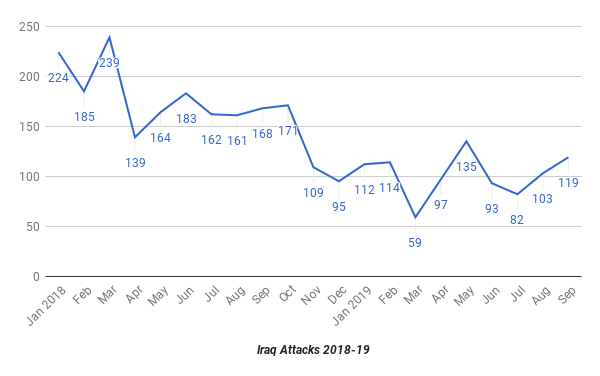 There were a total of 123 incidents recorded in Iraq in September 2019. One incident was by the pro-Iran Hashd firing rockets into the Green Zone, and there were also three mass graves found in Anbar and Ninewa. That meant there were 119 attacks by the Islamic State during the month. That was up from 82 in July and 103 in August, and the highest monthly total since 135 in May. As usual, Diyala with 37 incidents led the country. Baghdad however had 24, the most since October 2018.

There were only three incidents in Anbar in September, likely the fewest since the U.S. invasion. Attacks have steadily been going down in the province since a large spike at the start of the year. Anbar used to be one of the centers of the insurgency, but now it’s mostly being used as a transit point between Syria and Iraq. 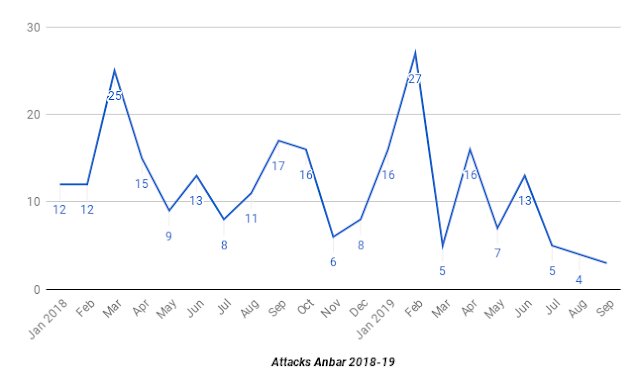 Babil continued to be an opportunistic target for the militants. In August, there were 8 attacks, the most since June 2018. In September that figure fell to 3, which was the average number per month from April to July. Jurf al-Sakhr in the northeast is almost always the area hit because it is a Hashd base. It looks like IS was trying out the province last month, and moved on to other areas in September. 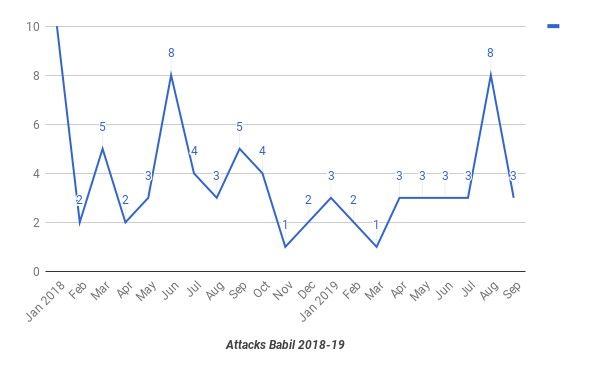 The insurgents have slowly but surely infiltrated back into Baghdad, and September showed that they had some limited success. There were 25 incidents during the month the most since 30 in October 2018. Attacks hit a nadir of 4 in March, and creeped back up every month since then. Not only that, but September 7 and September 16 there were five IEDs on each day inside the city itself. Usually, IS has been kept on the perimeter, mostly the outer towns in the north and south. This was a huge advance for the group. October the numbers are going to go down, because it halted operations during the protests, but it will be interesting to see if it can build on this in November or whether the security forces will be able to counter it. 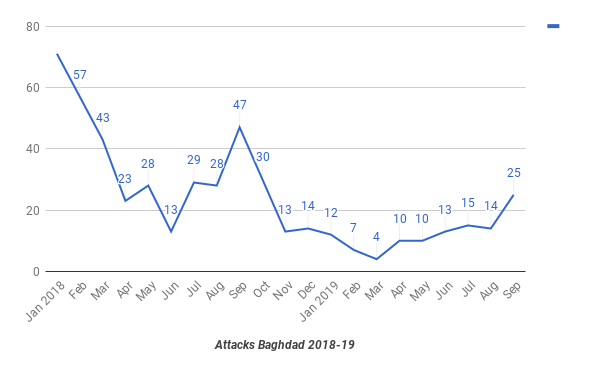 Ninewa continued to see wide fluctuations in IS activity. In May, there were 25 incidents. That went down to 10 in June, 6 in July, and 9 in August before rising to 22 in September. Almost all the attacks last month were IEDs, but a mukhtar was assassinated, and mortars were fired on Mosul. 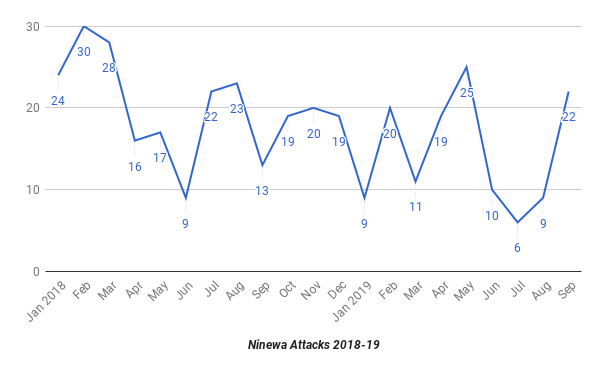 Salahaddin like Anbar appeared to no longer be a priority. There have been single digit incidents in the province for four months straight with just 10 in September. With major bases in the Hamrin and Makhoul Mountains this might be where the group is hoping to lay low and rebuild rather than carry out operations for now. 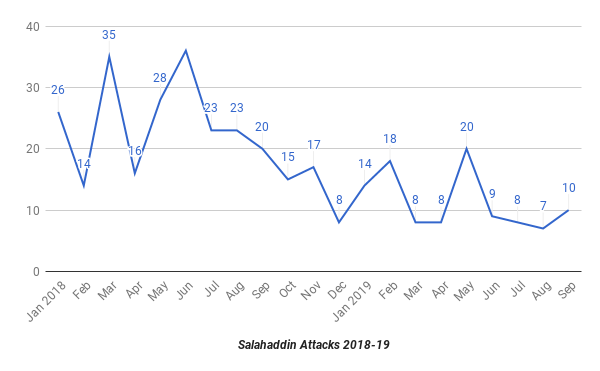 Diyala, and to a lesser extent Kirkuk remain the major centers of violence in the country. There were 37 incidents in Diyala down from 42 in August, and 22 incidents in Kirkuk, almost the same as he 21 recorded in August. Diyala sees a constant diet of gun battles, attacks upon checkpoints, towns being assaulted, and people being driven out of rural areas. In September, the militants went back to hitting nearly all the major districts in the province. IS is doing the same in Kirkuk, but at a slower pace, and concentrating upon the south. There was an attack upon a police station, and an army base, and a police HQ was hit by mortars during the month. Here the insurgents are challenging the local government and security forces and setting up new areas to build bases to rebuild and train new cadres. The goal in both these provinces appears to be to re-establish base camps via a relatively high pace of operations compared to the rest of the country. 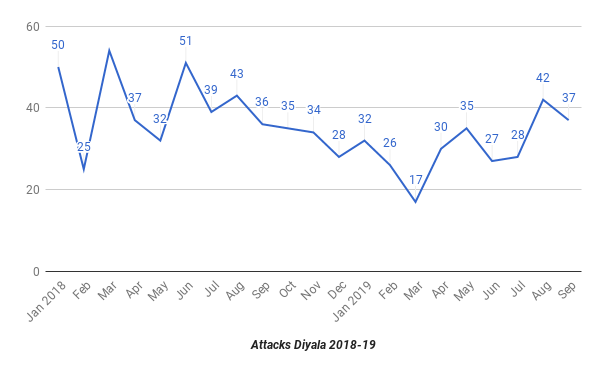 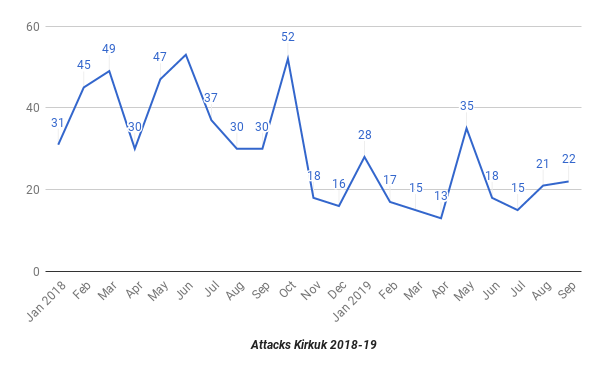 Finally, the Islamic State carried out a rare car bombing outside of Karbala city. IS has hardly set off any vehicle bombs the entire year. It has also not really hit the south either, so this was an especially surprising event. The group’s networks are obviously highly damaged. Caches found by the security forces show that it has plenty of explosives, but it doesn’t have the people to deliver them and then employ them otherwise these types of incidents would be far more common.