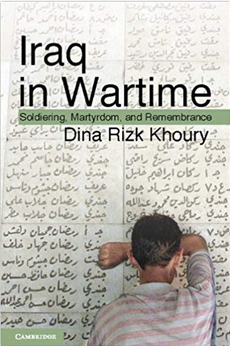 Dina Rizk Khoury’s goal in Iraq in Wartime, Soldiering, Martyrdom, and Remembrance was to analyze how the Baath Party adapted its rule during two wars, the Iran-Iraq War and Gulf War, and the 1991 uprising. Her main resource was the Baath Party files that were taken out of Iraq after the 2003 invasion and sent to the United States, which currently reside at Stanford University. Khoury’s thesis is in line with other recent books on the Baath that it greatly expanded its role, and created a series of rewards and punishments to control the population during this period of extended conflict.


The Iran-Iraq War completely transformed the Baath Party. In the 1970s, the party emphasized development and a welfare state. That all ended with the war as the Baath became concerned about security and control. It’s first task was to propagate a war narrative that portrayed Iraq as the victim of Iranian aggression. It argued Tehran backed terrorists started the war early in 1980 before the official opening in September, and therefore Baghdad was only defending itself. It also posed the war in stark terms, Arabs vs Persians and Arab Islam vs Persian Islam. Finally, it tried to co-opt and police the Shiite establishment out of fear that it would align itself with Iran. It’s second job was to monitor the military to make sure it stayed loyal. That was accomplished via political commissars placed throughout units. Third, it went after the large number of deserters in the south and the Kurdish parties aligned with Iran in the north. The Baath Party militia hunted down AWOL soldiers, launched major military operations in southern Iraq to arrest them, and denied their families services unless they turned in their relatives. Part of this effort included turning the southern marshes into a military zone so deserters couldn’t hide there. A similar campaign was launched in Kurdistan. These were huge endeavors with 25,000 people removed from Basra in April 1985 and 1,444 villages in Kurdistan destroyed from April-July 1987. Fourth, the party went from promoting women as independent actors in the 1970s to telling them to go back to their traditional role s mothers to give birth and raise the next generation of soldiers. Last, it set up a whole series of benefits for families of martyrs to keep up morale and maintain their backing. The idea of martyrs also played into the messaging about the sacrifices Iraqis were making to defend the nation. These all highlighted how much the Baath expanded its role during the 1980s. It became part propaganda machine, part military enforcer, part anti-reformist, and part social service. It was at the battlefront, behind the lines, and in the homes of Iraqis. It built up support and punished the dissenters. Khoury detailed how the Baath wanted to be involved in nearly every facet of life during the war.

The Baath tried to use those same techniques during and after the 1991 Gulf War, but faced a completely different situation Again, the Baath came up with a story that Iraq was standing up to imperialism and Zionism, but the complete collapsed of the military and the subsequent uprisings, aka the Intifada, in southern Iraq and Kurdistan threatened the regime. The international sanctions also robbed the party of its wealth that it used to dole out to people to keep them loyal. The Baath therefore had to adapt to survive. It tried to control rations for example, to maintain its patronage. It also offered a series of amnesties to deserting soldiers and those that took part in the uprisings, but then they were denied their rights and had to prove themselves to gain back their privileges as citizens. It tried to create a new narrative completely ignoring the Gulf War, and emphasizing that Iran tried to overthrow the government during the Intifada. Again, Khoury discussed how adaptable the Baath were. The sanctions and destruction from the Gulf War hit Iraq hard. That meant it didn’t have the resources it once had to offer the carrots along with its sticks to control society. Instead, it had to make a number of ad hoc decisions to stay in power.

Finally, Khoury went over how the idea of martyrdom still dominated the post-Saddam government. The Kurdistan Regional Government focused upon the gassing of Halabja during the Iran-Iraq War and the subsequent Anfal campaign, while the Shiite religious parties memorialized the 1991 Intifada. It created a Martyrs Foundation, which set off a huge controversy because it excluded the soldiers from the Iran-Iraq and Gulf Wars, ignored the victims of the 2003 invasion and U.S. occupation, and allowed for accusations of being ethnosectarian. Khoury argued that the new Iraqi government wanted to replicate the Baath practices, but with its own vision of who would gain rewards and be celebrated. The new elite however didn’t have control of society like the Baath and their actions led to lots of dissent and counter narratives.

Like other recent books on the Baath such as Joseph Sassoon’s Saddam Hussein’s Ba’th Party, Aaron Faust’s The Ba’thification of Iraq, and Samuel Helfont’s Compulsion In Religion, Khoury’s Iraq In Wartime emphasized how the Baath went from a political party to dominating the state and onto doing the same to society via both rewards and punishments. Previous histories like Kanan Makiya’s Republic of Fear only talked about the repression used to rule Iraq. While that was always there, it was not enough to run a country. There were plenty of carrots to go along with the sticks. The elaborate system of services that were offered to people who were labeled martyrs for example was one example. Not everything was force either like how deserters had to prove themselves to the government to gain back access to things like food rations or an education. Khoury’s writing is interesting and engaging. There was one chapter where she wrote about how Iraqis attempted to navigate within the Baath’s rules to write things like novels about the Iran-Iraq War, which was not as good as the others. Overall, the book adds another element to the new scholarship on Baathist rule in Iraq.