Review Why Do You Kill? The Untold Story of the Iraqi Resistance

Review Todenhofer, Jurgen, Why Do You Kill? The Untold Story of the Iraqi Resistance, New York: Disinformation Company, 2009 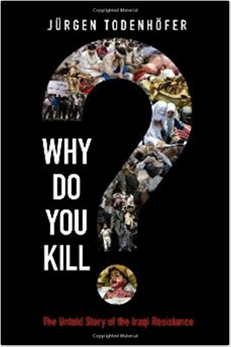 Why Do You Kill? The Untold Story of the Iraqi Resistance has to go down as one of the worst books ever written about Iraq. Jurgen Todenhofer starts off explaining how he has affinity for the people of the developing world, which was why he wanted to go to Iraq to find out the truth about the Iraq war. He travelled to Ramadi in 2007 where he got completely played by his handlers. Conveniently all of the people he meets who claim they are members of the insurgency all repeat the same themes. They all claimed they were the victims of random acts of violence by the Americans, which was what led them to armed struggle against the occupation. They said they never killed civilians, only Al Qaeda in Iraq did that which they all condemned. Even worse two men told the author they were a Shiite and a Christian who were all part of a united resistance that represented the whole country. Todenhofer was so naive he not only accepted everything he was told, but wrote sympathetically about them as well.


The first sign that the people Todenhofer met in Ramadi were manipulating him was that they all had a similar story about the evils of the Americans. His handler in Ramadi, Abu Saeed for example claimed that more than 50 members of his extended family had been killed by the Americans. Another stated that his young nephew was playing soccer when he was suddenly shot by an American sniper. Another told the story of how the U.S. raided his house and shot and killed his mother for no reason and then left. Similar testimonials were told by each person he met. The goal of these stories was to paint the occupation as a great injustice where the Americans killed innocent Iraqis left and right with no remorse, and that justified the insurgency. Todenhofer couldn’t get enough of these recollections because it fed into his anti-imperialist world view, and belief that the U.S. invasion was unjust. Their tactic worked because Todenhofer not only believed them, but showed empathy as well writing that Iraqis had lost so much at the hands of the Americans they felt like they had no other choice but to take up arms against them.

Next the Iraqis condemned Al Qaeda in Iraq for their killings of civilians and claimed no one else in the insurgency did that. Every one of them, even a man named Rami who said he was a moderate member of Al Qaeda in Iraq, condemned the group’s suicide and car bombings and the civilian casualties they caused. They were all quick to point out that Al Qaeda in Iraq was mostly made up of foreigners and that was why they were such murderers. Each then went on to say that the insurgency never killed innocents. One said that he set off IEDs and had the opportunity to kill some American troops with one, but didn’t because there were children around. Again, Todenhofer was taken in and liked the fact that the insurgents called Al Qaeda in Iraq terrorists. They provided a convenient foil to compare the good resistance who only used violence against military targets versus Al Qaeda in Iraq that murdered people.

The cherry on top of this wild tale Todenhofer was told was that he met three unbelievable characters that fed him more information that he wanted to hear. Mohammed said that he was a Shiite and former Baathist was who a leader in the insurgency. He claimed he was fighting for all Iraqis in an Islamic-nationalist cause. Todenhofer wrote how Shiites fought for Iraq in the Iran-Iraq War, and conveniently a Shiite appears who confirms that his community and Sunnis were standing together once again against a foreign threat. Yusuf said he was a Christian from Baghdad who was also fighting for Iraqi nationalism. He not only said that most of the Christians who fled Iraq to Syria because of the war backed the insurgency as well, but there were more Christians fighting the Americans then there were members in Al Qaeda in Iraq. He went on to say that the Christians and Muslims were standing side by side to end the occupation. Finally, Rami told Todenhofer that he was part of a moderate wing of Al Qaeda in Iraq made up of Iraqis who disagreed with the group’s killing of civilians, but still supported it because it was the most effective in fighting the Americans. Again, Todenhofer hears all this and comes away believing that the Iraqi insurgency is a national liberation struggle just like others that have happened across the world. If he knew anything about Iraq he would’ve known that all of these people were lying to him in a carefully orchestrated influence campaign.

There is nothing wrong with talking to militants per se if done in the proper manner. Interviewing them with a critical eye and analyzing what they say can reveal their world view, motivations, strategies, etc. which can enlighten the wars they are involved in. Todenhofer claimed he went to Ramadi to find the truth of the conflict unvarnished by American and western influence. Instead, he was told exactly what he wanted to hear, that the U.S. was killing innocents which was forcing Iraqis into armed struggle. That the insurgency never killed civilians and abhored terrorists like Al Qaeda in Iraq, and that all Iraq’s sects were united in a nationalist fight to liberate their country. He rarely asked any probing questions of any of the people he met, and instead repeated their stories in a way that actually advocated for their cause. The fact that he was being deceived so obviously and fell for it places this book at the top of the list of worst Iraq books.