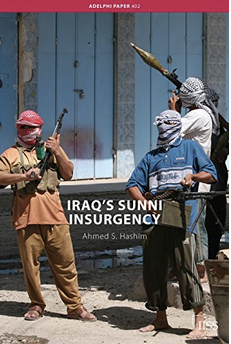 Dr. Ahmed Hashim provides a brief overview of the Iraqi insurgency from 2003 to 2008 in this book which was part of the Adelphi Papers by London’s International Institute for Strategic Studies. Hashim goes through the causes of the insurgency, its ideology, objectives, tactics, and its underlining shortcomings. The last point arises from the fact that the Sunni militants up to 2008 were hopelessly divided and couldn’t push their views into politics. Even though the events covered are just a few years old they are already history as the Iraqi insurgency has continued to evolve with only the Islamic State left from the plethora of groups that used to be involved. Iraq’s Sunni Insurgency still provides a good insight into the basics of those that chose to oppose the U.S. occupation and the post-Saddam Iraq.


One of Hashim’s main points is that the Iraqi insurgency was much different from previous guerrilla wars. First, it was a reactionary response to the overthrow of Saddam Hussein and the empowerment of the Shiite majority in Iraq. Sunnis had been running Iraq since its creation after World War I and under the Ottomans before that. Even though they were a minority they believed that their norms and position at the top of the hierarchy was how things were meant to be. When they lost all that in 2003 some turned to violence in an attempt to restore the previous status quo. Other insurgencies had been based upon liberation from imperialist powers or revolutionary ideologies like Communism. Rather than aiming for national change, the Sunni militants wanted their community to return to power in Iraq.

Another issue is the diversity of groups that turned to armed struggle undermined their effectiveness. Hashim broke up the insurgents into five broad categories: Baathists/former regime members, nationalist-Islamists, Iraqi Salafists, tribes, and foreign Salafists. Each group had its different goals from the return of the Baath to creating an Islamic state within Iraq to establishing a caliphate across the Middle East. There was also a big difference between those that were only thinking of Iraq and those that had international aspirations. A final difference was some groups were open to talks with at least the Americans, and others were not. That meant some tried to reach out to Sunni parties like the Iraqi Islamic Party and the broader Iraqi Accordance Front that had seats in parliament and positions in the government or the Association of Muslim Scholars, which openly supported resistance to the Americans, while others completely rejected politics. The militants were only loosely held together by their opposition to the U.S. occupation and Shiite rule. Even that didn’t last as splits quickly emerged as early as 2004. By 2006 not only were many groups fighting Al Qaeda in Iraq, but the Anbar Awakening had started amongst tribes in the Ramadi district of Anbar province. This lack of a unified front let alone guiding principles or ideology led to splits, in fighting, and eventually tribes and insurgent groups that became the Sahwa working with the Americans against Al Qaeda in Iraq. Again, this set the Iraqi experience apart from other insurgencies as it was the most divided in recent times. They also never really joined politics. Ironically, in 2014 tribes and militant groups finally did come together behind what had become the Islamic State of Iraq and Syria (ISIS). This required them to forget all of their past differences, the fact that many had fought ISIS, and that the Islamic State was not solely focused upon Iraq for the chance to seize power. While they took Mosul and a large swath of territory in the center of the country, their alliance backfired as ISIS forced all the other groups to either join them or were wiped out. Today there is only the Islamic State, the first time there has only been one insurgent group in Iraq.

Hashim’s conclusion was also prescient as he warned that the success of the Surge begun in 2007 was illusionary. He warned that the changes brought about were fragile and reversible. More importantly, he pointed out that Prime Minister Nouri al-Maliki didn’t want to negotiate with Sunnis or accept them into the Iraqi security forces because they might threaten Shiite dominance of the state. Hence when the Americans turned over the Sahwa forces to the Iraqi government, it never followed through with the promises to integrate them into the army and police or provide them with jobs. Maliki would also launch a series of arrests against some Sahwa groups. That all meant the insurgency could rise once again from its nadir in 2008, and it did six years later.

The book’s one main fault is that it plays down the role of Syria’s support. While acknowledging that Damascus gave safe haven to Baathist leaders and allowed militants to operate out of its territory, Hashim claims that decreased with time. He even writes that Syria tried to stop foreign fighters from using it as a transit route to Iraq. The Assad government however, supported the Iraqi insurgency all the way up to the start of the Syrian civil war in 2011. Baghdad would regularly complain about its neighbor’s interference, so it’s unclear where Hashim got his information from.

Iraq’s Sunni Insurgency is a quick read, only 77 pages, on the origins of Sunni militancy in Iraq after the 2003 invasion. Hashim provides a general framework for the groups involved. His analysis is also generally good for how Iraq was different from other countries, and how deeply divided the movement was.